The brakes on electric production 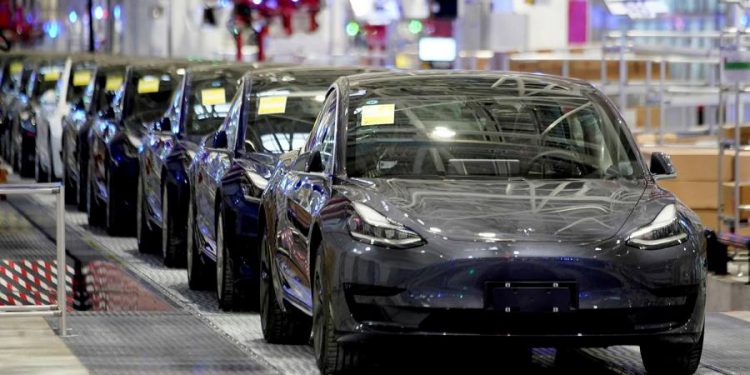 Electric-car manufacturers are selling vehicles as fast as they can make them, but supply chain issues mean production remains on a go-slow.

Tesla said on Saturday that it had delivered 310,048 new cars in the first three months of the year, slightly ahead of the number handed to customers in the final quarter of 2021 and nearly 68 per cent up on the opening months of last year.

“This was an exceptionally difficult quarter due to supply chain interruptions & China zero Covid policy,” Elon Musk, chief executive, tweeted. Production at its Shanghai factory has been halted since March 28 because of Covid lockdowns.

Car rental company Hertz is an eager buyer of electric, with 100,000 Teslas on order and news today that it will purchase 65,000 cars from Swedish electric-car maker Polestar over the next five years. It has promised to offer the largest electric rental fleet in North America, and “one of the largest in the world”.

Our weekend Big Read looked at the problems that EV start-ups are facing in getting their production processes working. “[Start-ups] wanted to disrupt, but have no idea how to disrupt manufacturing technology,” said Karl-Thomas Neumann, a Polestar board member.

SUV and pick-up truck maker Rivian has been forced to halve its production targets to 25,000 for this year because of global supply chain problems. Luxury electric-car maker Lucid pushed back the start of production last year by several months, saying that it wanted to get its first car “absolutely right”.

In the UK, Arrival has halved production targets this year but hopes to begin making its electric vans by the autumn through its strategy of using microfactories that are quick to build.

“The capital required is just $50mn for a microfactory, so the economics still work, and it lets you react to demand instead of forecasting demand [five years out],” said Mike Ableson, a former General Motors executive who runs Arrival’s automotive business.

1. Musk’s social media move
A filing disclosed on Monday that Tesla’s chief has taken a passive 9.2 per cent stake in Twitter. Twitter shares are currently up a tweetable 29 per cent on the news.

2. UK to royally mint NFT
The UK government has laid out plans to become a “global hub” for the crypto industry, proposing new regulations for stablecoins, a Royal Mint NFT and a suite of other measures to court digital asset companies. Lex has been looking at Solana, the blockchain tech favoured for NFTs.

3. Five ways to fight the information war
The Russian invasion of Ukraine is providing a crash course in how to think both about accidental misinformation and deliberate disinformation. Tim Harford offers some simple guidelines to follow when interacting with social media. Meanwhile, Financial Times correspondents in Asia and Africa report on why there is notable support for Russia on social media in their regions.

4. VC peddles e-bikes
Electric bikes are proving as popular as cars, with the market expected to be worth $52bn by 2028. Lex says venture capitalists are getting excited. For example, Rad Power Bikes of Seattle recently raised a VC round that valued its business at $1.65bn.

5. Stephen Wilhite, inventor of the gif, 1948-2022
Steve Wilhite, who has died aged 74, was the computer scientist who invented the gif image file format in 1987. Tim Bradshaw traces the life of the “godfather of memes” and the history of the gif from its first use on CompuServe to being deployed in the war between Russia and Ukraine.

Monday: Nasa will hold a press conference to discuss the final test stages, called a “wet dress rehearsal”, for its Artemis 1 rocket. The Artemis programme aims to return astronauts to the Moon and establish a long-term lunar colony as a precursor to human exploration of Mars.

Wednesday: Axiom (or Ax-1), the first all-private astronaut rocket mission to the International Space Station, is due to launch from Nasa’s Kennedy space centre in Florida.

Not since the 1980s and 1990s has the launch of a new Swatch watch created such buzz, writes John Gapper. The £207 timepiece that thousands queued up to buy last month is Swatch’s tribute to the Omega Speedmaster Moonwatch Professional, as worn by American astronauts, including Buzz Aldrin when he walked on the moon in 1969. The MoonSwatch, which comes in 11 colours, is a playful pastiche of a clockwork icon that retails for £4,200 or more. Read more