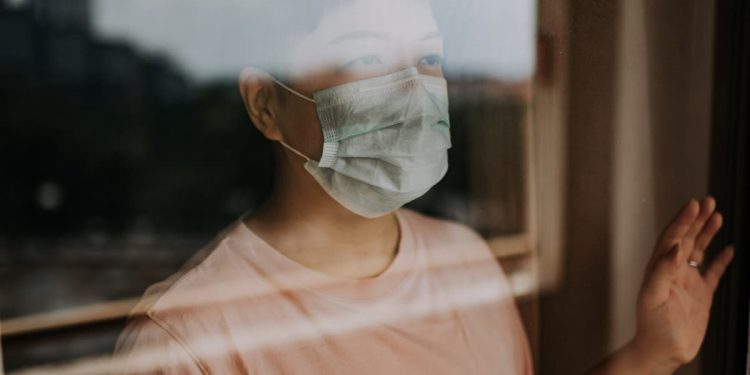 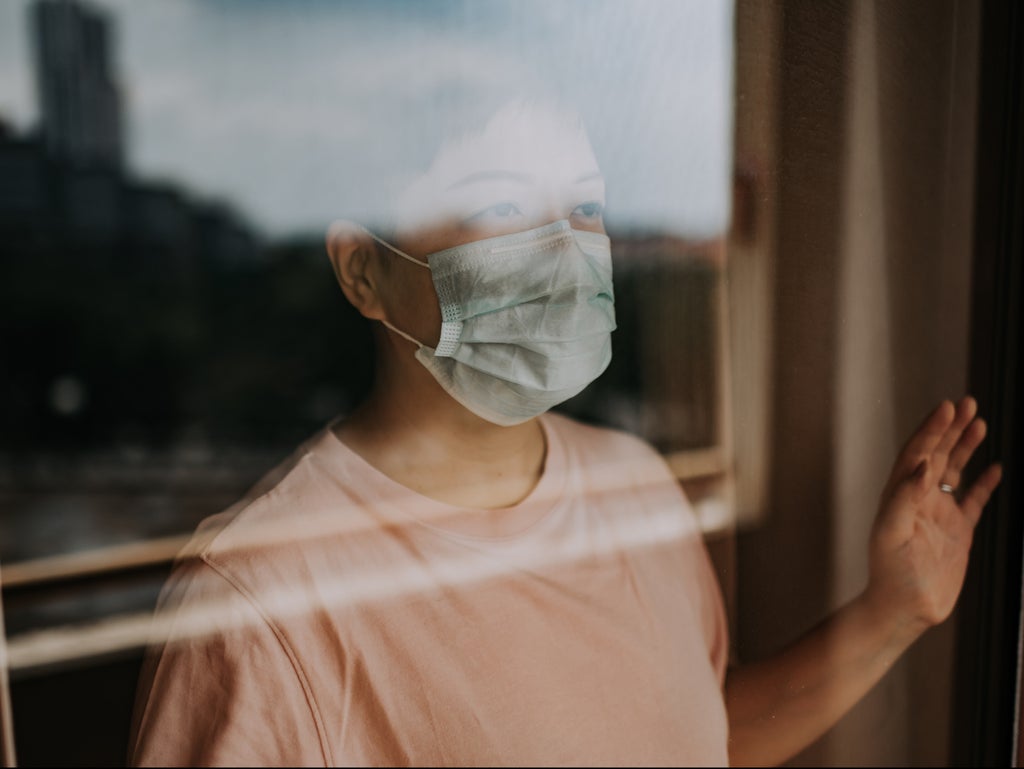 “I honestly can’t remember the last time I had a hug,” Jane tells me. Despite living with her partner in a relationship that encompasses 17 years, the pair have been living completely separate lives in the same Surrey flat due to Jane being immunosuppressed as a result of a kidney transplant.

Jane works, lives and sleeps in what was once the couple’s dining room – “it’s a bit like a student bedsit” – and her partner takes their bedroom. “We can’t sleep together because of the Covid risk – he’s a train driver in London, so there’s always a risk that he’ll pick up the infection and bring it back in, so we have to keep separate and that can’t change,” she says.

“My relationship now feels like living with a brother or a flatmate. He has become more of a protector and a carer than a lover. I have got used to being independent and I am luckily quite resilient, but it does change the relationship you have. All of the things that made us the couple we were are history now,” she adds.

Jane is just one of millions of people in the UK living with a disability or chronic illness who are still living under stifling and life-altering restrictions. At the beginning of February this year, prime minister Boris Johnson announced he would be lifting all Covid regulations in England, such as mandatory face masks and the requirement to isolate after testing positive, a month earlier than initially planned. While this was a cause for celebration for many, the relaxation of such measures has only served to hamper the freedom of others.

Paul, 64, lives alone in Brighton and has had a similar experience. Treatments for head and neck cancer led him to early retirement and put him at greater risk of catching infections, and he has ongoing fatigue and side effects that mean he is classed as clinically extremely vulnerable (CEV). “I would say I’m semi-shielding,” he tells me. “I don’t go into places. I haven’t been in people’s houses and I haven’t had anybody round apart from someone to service the boiler.”

Paul was instructed not to leave the house during the first lockdown, but would go for early morning walks when there was no one about “because being inside was driving me stir-crazy”, he says. “I didn’t see anyone though.”

According to a recent study by Sense, a UK charity for people with complex disabilities, three in five (60 per cent) disabled people in the UK now describe themselves as “often or always lonely”, rising to more than three quarters (77 per cent) of disabled people aged between 16-24.

It’s a familiar feeling for Paul. “I’m quite good at looking after my mental wellbeing, but it’s been lonely at times,” he tells me. “I haven’t been touched by anyone or had a hug from anyone since the first lockdown. The only time I’ve been touched is during a medical appointment for injections.”

Jennifer, 52, from West Yorkshire is an author who has been shielding since before the first lockdown with her husband. “I think I would have been incredibly lonely if I hadn’t been with him,” she says. “I’ve struggled with loneliness before and I think I might have taken more risks rather than staying home alone all the time if I were single.”

Prior to the pandemic, life was “pretty sociable” for Jennifer, who has autoimmune hepatitis. Since shielding, however, she says “my world has got much smaller. I sweat the small stuff more. I find myself getting worked up about things that are hideously trivial but they eat away at me because I’ve not got much going on.”

Mask wearing and the decision to accept the vaccine have proved to be incredibly divisive issues that have split families in half across the globe. Jennifer, Jane and Paul all speak of such issues affecting relationships in their lives.

“I’m getting pressure now,” says Jane. “Everyone’s saying, ‘oh, we’re all cured, we’re all vaccinated, everything’s fine – let’s meet’. I’m having socially awkward conversations with people, either saying ‘these are the criteria on which I will meet you’, or ‘I’m sorry, I still can’t’. There are people I know who I’ll never see again because they just don’t get it [the risks she faces].”

“Some friends have been brilliant and stuck by me,” says Jennifer. “I feel like one or two friends have lost interest in me because I’m not available to socialise ‘normally’ when they’re already going out again and I think there are one or two people I might not hear from again, which is sad.”

Their concerns come at a time of rising Covid infection rates. New Covid-19 sub-variants – Deltacron and Stealth Omicron – are believed to be behind a global surge that has seen case numbers in the UK steadily increasing since the lifting of restrictions at the end of February. The figures form part of a worrying trend that accompanies the phasing out of free tests for the public from 1 April. Despite this, health secretary Sajid Javid said on Monday that the government’s “level of concern” has not changed.

Eve Byrne, director of advocacy at Macmillan Cancer Support says: “The announcement of the first lockdown marked the start of a tremendously difficult two years for many people living with cancer, and as time ticks on we’re hearing from more and more people who are still feeling incredibly nervous about living their everyday life.

“The government cannot leave these people behind and must urgently communicate who will be eligible for free testing after 1 April, clearly setting out how this will work. It is vital that immunocompromised people are included in this. It’s unfair and unacceptable to continue to leave people anxiously waiting in limbo.”

Data released from the Office for National Statistics (ONS) in February 2021 revealed that nearly six out of every 10 people who died with coronavirus in England 2020 were disabled. Sense research shows that six in 10 disabled people they polled are fearful of going outside because of the removal of Covid restrictions, while seven in 10 feel they are being left behind.

For Jennifer, fear around death has been the hardest part of the pandemic. “My husband was friends with one of the first medics to die in the UK,” she says. “I know three people in total who have died from Covid, which I’m sure has affected my anxiety around it.”

Jane has found making decisions about her career and wanting to remain visible at work difficult. “Keeping a brave face and having to constantly explain to people that I can’t do certain things because I have a transplant is hard,” she says. “Going into a new team, all people know is ‘Jane won’t be able to do that’ and no one ever says why, but it sets the scene about you.” She would like to see clear guidance from the government about how employers can better support people with immunosuppressive issues “for whom Covid is still a real and deadly risk”.

Jennifer describes the premature lifting of Covid rules as “crazy”. She says: “I don’t think everybody should have to live a really restricted life because of people like me. But things that we could all do to protect each other, like wearing face masks on public transport or in a shop that aren’t that much of an inconvenience in the grand scheme of things, I think we should still be doing.”

Paul agrees. “We do need to release people so they can get on with their lives, but it can be done in a safer way that doesn’t take away from others. Wearing a mask is not an infringement of your civil liberties,” he says.

Jane says she and her partner are having to learn different ways to be together. “We’re trying to get our life back, but it’s not straightforward – a Covid infection could be an immediate death sentence for me. It’s still stressful in our house. Society needs to be reminded that many of us still have problems.”

Richard Kramer, chief executive of Sense, tells The Independent: “We all want to put the pandemic behind us, but the future for many disabled people, their families and carers, doesn’t resemble anything like normal. Many will continue to shield, cut off from the world, feeling forgotten.”

Before the pandemic, Jane “lived the life anyone would want”. She said: “I had a busy social life, I was confident, and I was in and out of London for work.

“Now, I’m not as outgoing. I worry about going out and can’t get tests because our pharmacy never has any in stock. If you have the visual image in your head of the trainer-wearing, suit-wearing London commuter with a coffee, that’s what I was. It isn’t what I am now.”