The creators of Unpacking on developing a “weird”, queer, BAFTA-winning game 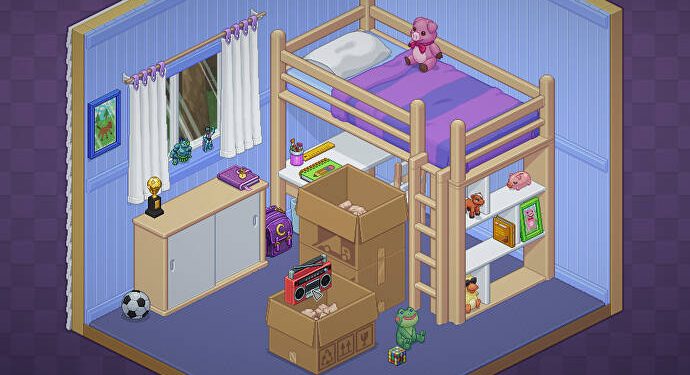 “Unreal. Absolutely unreal.” That’s how Wren Brier and Tim Dawson, the creators of Unpacking, described their double win at the BAFTA Games to me last week. So shocked were they at taking home gongs for Narrative and the public voted Game of the Year the couple didn’t even have a speech prepared.

Unpacking’s success has seen the indie “zen puzzle game” beat a number of big AAA games to several awards (not least Eurogamer’s own Game of the Year last year), and find itself cast as a gentle, queer David to the Goliaths of Returnal, It Takes Two, and Metroid Dread.


I caught up with Brier and Dawson before the BAFTAs to discuss the game’s development.


One of the most powerful aspects of Unpacking’s narrative is that it’s almost entirely wordless. Instead, the player pieces together the life of a young woman through objects unpacked into each room at different stages of her life. The inspiration for that came from a song.


“There’s a song called The Bed Song by Amanda Palmer,” says Brier. “And it goes through a series of snapshots in this couple’s life, just depicted through the different beds that they’ve had over the years. And I was like, what if we did something like that but with the moves in someone’s life?”


But how do you tell a story through objects?


Sometimes it was the game’s mechanics which informed the story, too. One example is the boyfriend’s apartment level where you must unpack the protagonist’s belongings around those of her new boyfriend.


“The game mechanic where we wanted you to be able to understand that you had to move items around ended up becoming a narrative beat, because by emphasising that it made the player feel like they were having to intrude or having to make space for themselves,” says Dawson.


“It accentuated the boyfriend’s lousiness,” Brier adds. “We needed to tutorialise the fact that you can move the boyfriend’s items around, how do we do that? Oh, we make his items take up as much space as possible. And then from that we get this story element of: ‘he didn’t make space for you’. And people love that or hate it.”


It’s not just storytelling but characterisation that’s done through simple objects. That meant those objects needed to reflect certain characteristics – sometimes specific to that character, other times just practical items. These were organised in character profiles.


Similarly, there’s a D&D influence too, with in-game housemates playing an ongoing tabletop game. That was something tangible that instantly solidified the connection between these characters, without explicitly showing them.


“I think there’s something kind of wonderful about geekiness and physical items,” says Brier. “It has a lot of physical artefacts, and some of it is terrible consumerism where we’re told that we need to buy more and more to define our identity. But at the same, it works really well for our game. And it’s kind of fun having these items that are tied to the things that you care about.”


Initially the game was more puzzle-like, but over time the team decided to loosen the rules and allow players more freedom to interpret object placement and, thereby, the narrative. “The most interesting rules are the rules that people come up with themselves, not our rules,” says Dawson.


The game’s narrative is of a young woman discovering her bisexuality and, for Brier, it reflects a lot of her own life experience. Yet while she herself had a relationship with a woman before meeting her current partner, Dawson, she flipped this for the game to avoid bi-erasure. She didn’t want the protagonist’s female relationship to feel like a phase or be dismissed as a college thing.


“This is a very personal game and [bisexuality] is a part of my life,” says Brier. “Not including it felt like a weird omission.


It all ties into the game’s authenticity, be it through bisexual representation, the inclusion of sanitary products, or the use of recognisable, relevant objects.


Adding to that is the foley design. Recorded by Witchbeam sound designer Jeff van Dyck, there are 14,000 foley sounds in the game comprising different objects and surface types. Each action in the game isn’t just one sound, but a collection of multiple sounds.


With so many objects and sounds, much of development took place in spreadsheets. Dawson tried to automate as much of the process as possible so that any changes to sprites or sounds could be catalogued and then pulled through into the game in order to populate the correct levels.


Says Brier: “We had spreadsheets keeping track of what items showed up in which levels, which items were new in each level, and which items were repeat items, which ones were variants on existing items.”

What a night at @BAFTAGames! We’re just in awe, and thank you to everyone on the BAFTA jury and in the public who voted for us. We’re so, so grateful 💜 pic.twitter.com/kHrltLEv8s

For a game that appears so simple, there is a lot going on underneath in both its narrative and design. But really it’s that authenticity that has resonated so well with players, something that was heightened by the game’s release during the pandemic.


“We were worried that people would be just so sick of being at home that they’d be like ‘I don’t want to play a game where I’m at home’,” says Brier. “But no, it didn’t end up working that way, people could relate.


“And I think because of the pandemic, a lot of people also had to move back in with parents or move across countries. And so a lot of people had recently had these experiences and seeing them reflected back at them in the game felt meaningful. We get a lot of very heartfelt letters from people about their experiences with the game.”


The game has been particularly popular on Twitch, where players have invested in both the gameplay and narrative with their communities, creating a snowball effect.


“People watch other people play and go ‘oh, no, this makes me think of how I want to do it’,” says Brier. “And then they play it themselves. So you watch someone play the game on Twitch and it’s a fun experience, because you learn about them a lot. Like people will sometimes tell stories as they play.”


It means that, through playing the game, players not only learn the story of the protagonist but put themselves into the game too, something Brier says was a tough balance to strike.


“In the end, instead of being a weakness of the game where you feel like you’re being pulled in two directions, it actually ended up being a strength of the game, where you’re supplementing information into the character that’s about you, because you’re playing this character. But also, I can put these bits of myself into her, and it becomes part of her,” she says.


The game’s design was so successful that it inspired a whole host of copycats on mobile devices following its release. That was more demoralising than flattering.


These games were copies that took the team’s hard work – from the mechanics, to the object design, and even the marketing copy – and simply replicated it shamelessly. It even caused an inadvertant influx of sign-ups to the Witchbeam mailing list, bumping them up a price tier in MailChimp.


“It’s very demoralising that someone goes ‘this game looks easy to make, so I’ll just clone it’,” says Brier. “There’s a lot more to this game than you realise if you think that you can just do it like that.


“The good thing about Unpacking is even though it looks easy to replicate, it’s not because it’s got just so much attention to detail, and the narrative and everything is very carefully thought out. So you end up with this sort of hollow experience.”


Unpacking, though, is anything but hollow. It’s authentic and relatable, full of detailed craftsmanship. To have that recognised commercially, successfully, and by BAFTA has been incredibly validating.


“This is a weird game,” says Brier. “But in the beginning, when we started developing it, we thought it was really niche and wouldn’t have wide appeal, but it appealed to us. And we were making it for us as like a little side project. And then it just kind of exploded, as we were working on it.

Northern Ireland vs England live stream: How to watch World Cup qualifier online and on TV

What’s a Sales Lab, and How Can It Help Your Business?

What's a Sales Lab, and How Can It Help Your Business?