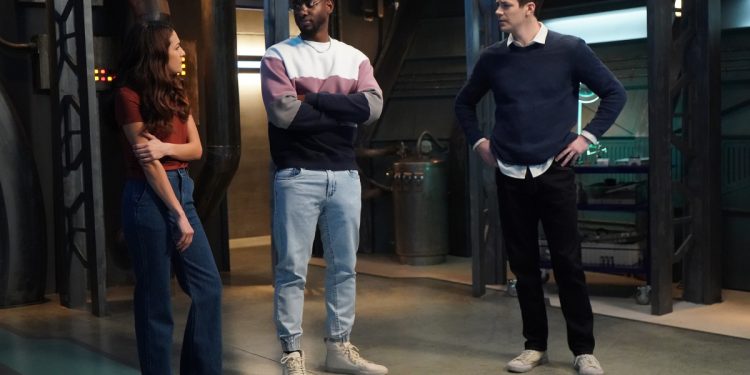 
The Flash has long struggled with the question of what to do with Frost, and her characterization has suffered as a result. It’s hard not to watch this episode and not see another in a long line of examples of the show choosing to write her in a way that fits the plot, rather than asking themselves if her behavior fits the character they’ve created. Frost’s line about having come into the world to protect Caitlin, so, of course, she wants to protect others is a great one—but does it really line up with the woman we’ve been watching the past few seasons? All I ask for is some consistency here. Plus, haven’t we sort of covered the “Frost is pointlessly sacrificial and Caitlin is upset” subplot before? Possibly even a couple of times?

Anyway, thanks to a generally nonsensical plan from Frost and an assist from Mama Snow, Team Flash makes yet another attempt to capture the seemingly sentient black fire that tried to kill Chester next week. They fail rather spectacularly—though at least Carla gets to somehow self-actualize into activating her latent ice powers—but that’s not the important bit: it’s what happens afterward. When the Black Flame suddenly appears to Caitlin, sporting a vaguely human-shaped face, and starts quoting back the words of her dead husband Ronnie to her.

Apparently, the Black Fire is Caitlin’s dead husband Ronnie (or is somehow connected to or channeling Ronnie) and suddenly this story is 100% more interesting than it’s been all season thus far.

The news that Robbie Amell would be putting in a guest appearance for a couple of episodes this season broke last fall, but I expect many of us (read: me) simply expected a few heartfelt flashbacks as Caitlin finally decided to try dating again for real. Maybe a cameo from whatever the new post-Crisis on Infinite Earths version of Deathstorm looks like if showrunner Eric Wallace was feeling particularly cruel to the Ronnie and Caitlin shippers out there. But the concept of Ronnie as a meta-like being capable of murdering innocents, well, that’s a gut punch.

It’s possible that we should have all guessed this twist as soon as the mysterious black fire chose to target Frost. After all, Frost didn’t exactly exist when Ronnie was alive, so there’s no reason this thing—ghost, memory, imprint, whatever—would have any idea that this woman who looked exactly like Caitlin wasn’t still the wife he left behind. (Just maybe with a newfound love for Manic Panic.)

But, to be honest, the idea that Ronnie’s spirit or essence or whatever is suddenly a murderous death ghost is more than a little upsetting. After all, he sacrificed so much (and literally himself, twice!) for both Team Flash and Central City, that the thought he’s not resting in peace in whatever The Flash’s version of a superhero afterlife is…well, it honestly kind of sucks.

Why is the UK government backing nuclear power when onshore wind is so much better? | Alethea Warrington