Home » The Genesis GV60 has some sort of shifting orb

The Genesis GV60 has some sort of shifting orb

The new 2022 Genesis GV70 is a potential game changer, both for its brand and the compact luxury SUV segment. A big part of that is its exquisite interior that’s great to look at, great to touch and, refreshingly, great to use. There is just one potential issue. Take it away me from earlier this week …

“The two knobs on the center console that control the infotainment system and gear selection are also high-quality pieces, resembling fine crystal. Of course, they are also virtually the same size and located adjacent to each other. I repeatedly selected XM 28 when I intended to put the car into Reverse. This sure seems like it’s going to be a problem. Although both knobs have different textures, require different levels of effort to move and do their respective jobs well (unlike Jeremy Korzeniewski, I’m not as automatically averse to a rotary shifter), their proximity and similar size could lead to driver confusion. One wonders why Genesis moved away from the iPod-like track wheel found in the G80 and GV80 that avoids this situation.

Perhaps it’s because the iDrive-like knob is a better tool for controlling the infotainment system than the track wheel, and you are bound to use it a great deal as the 14.5-inch widescreen display is mounted in a way that prioritizes your line of sight rather than its touchscreen capability. To be clear, this part isn’t a problem. The knob is well-suited to the menu structure and helps keep your eyes on the road, while having the touchscreen capability is still helpful in certain situations like using Apple CarPlay and Android Auto. Altogether, this system is more user-friendly than what you’ll find in those German competitors (as well as others), and is sufficiently pretty to boot.”

That brings us to the upcoming Genesis GV60 electric vehicle. It has the infotainment knob, but changes things up on the shifter front. Instead of a flat knob, it has what I can only describe as a “shifting orb.” It’s a clear acrylic or perhaps glass hemisphere with a pattern of criss-crossing lines inside. It appears to operate in the same manner as the other Genesis rotary shifter (left for reverse, right for drive), but instead of the prominent Park button in the center, the shifting orb has a tiny little button next to the D. 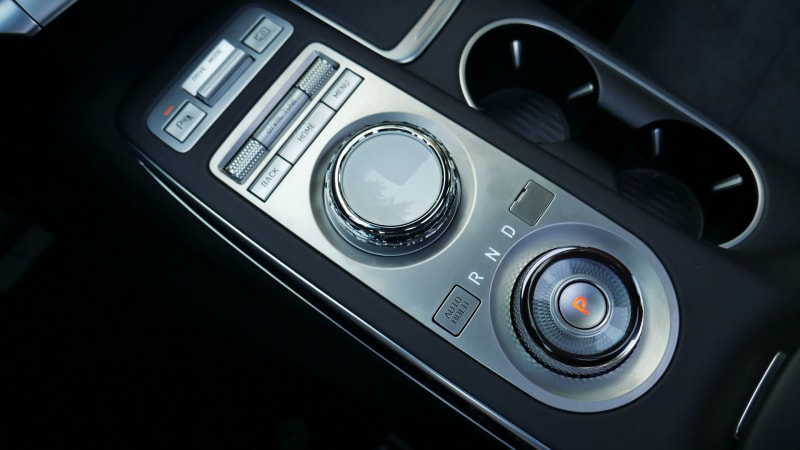 This seems silly. At least the regular knob works OK enough. The shifting orb looks harder to grip and that Park button is terrible. Sure, the car will almost certainly automatically engage park when the car turns off (and probably engage the parking brake, too), but it’s still just different for different sake and fancy for fancy sake.

Personally, I’m not against electronic shifters or specifically rotary ones. If done right, which is a very big and rare if, they don’t pose a hazard, and do in fact free up space on the center console. My preferred electronic shifter is Mercedes (and old Teslas that used the same bit of hardware), which uses a simple stalk on the steering column. Pictured above right, this frees up the center console completely, and you’re not going to accidentally change the radio station when going for Reverse. I’ve always found my time to adaptation with it is remarkably quick, and in fact, it’s usually harder to adapt back — I will almost always turn on the windshield wipers of whatever test car I get into next after driving a Mercedes for a week. But I’ll only ever do that once, and that’s really not that much different than what you might find with old-school column shifters like those still found in many pickups.

A shifting orb, though? Come on now. That’s just silly.

Southern Copper (SCCO) Dips More Than Broader Markets: What You Should Know