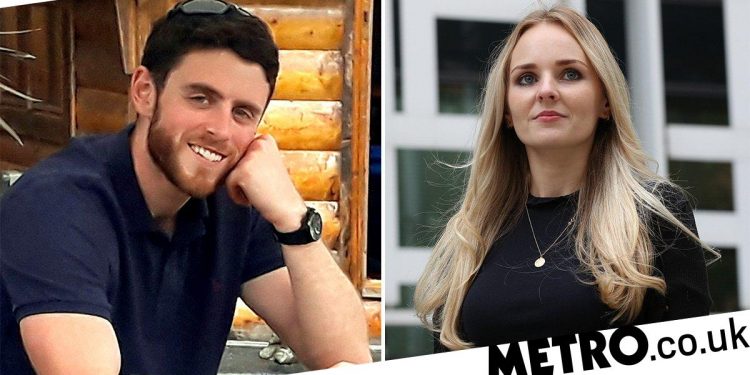 
Viewers were left in tears tonight watching The Killing of PC Harper documentary on ITV.

The doc was fronted by Sir Trevor McDonald, who explored the tragic death of PC Andrew Harper and the investigation to catch his killers.

PC Harper was a 28-year-old police constable who was killed in Berkshire in the line of duty in August 2019.

Harper and a fellow officer were responding to a report of a burglary, after which Harper was dragged behind a car for a mile at 50-70mph, causing his death.

As the documentary recalled his brutal death, Twitter users struggled to hold back the tears as they took to the social media site to express their heartbreak.

One wrote: ‘Chills me to the bone to think what a dreadful death this poor soul had, absolutely horrific.’

‘This is absolutely heartbreaking, a hard watch for us viewers- can’t imagine what his family and friends went/ still going through,’ shared another.

‘Horrific. Senseless. Ruthless. Heartless. Loss of a genuinely lovely officer. PC Harper was worth his weight in gold to his wife Lissie. Wickedly taken away from her. Andrew was a loving husband and a fine officer,’ tweeted another viewer.

There was a long fight for convicting the killers of Harper, with viewers especially enraged and disgusted by the attitudes of the three suspects.

‘The barbarity of this never diminishes even after reading/ hearing the story several times. Shocking,’ tweeted one person.

‘Absolutely horrific his killers must get life! #TheKillingOfPCHarper I hope this documentary brings justice for PC Harper!’ said another.

Another raged: ‘The perpetrators were shameless & disrespectful with the smug looks & smiles on their faces. A heinous crime that brought tears to my eyes then, as it does now.’

A colleague of Harper’s speaking in the doc said he didn’t believe the killers realised the devastation they caused to Lissie.

‘The only thing they think about is themselves,’ he said.

Lissie herself recalled the first time she saw the three teenage males, saying they were ‘messing around without a care in the world.’

‘They had absolutely no regard for others, no remorse, no guilt, that you expect from decent people in the world.’

In July 2020 – 10 months after Harper’s death – the teens were found guilty of manslaughter and received sentences of 16 and 13 years imprisonment, but they were acquitted on the charge of murder.

The defendants claimed they did not know that Harper was attached to their car as they sped off.

Harper’s killing led to the proposal of Harper’s Law, which would introduce a mandatory sentence of life imprisonment for anyone convicted of killing emergency workers while committing a crime, regardless of age and with no differentiation between murder and manslaughter.

Lissie – who was just 28 when she became a widow after police knocked on her door in the early hours to break the news of her husband’s death – continues to fight for the law to be passed, and viewers of the documentary expressed their solidarity.

Lissie launched the campaign for Harper’s Law in August 2020 and, separately, Harper’s mother launched a campaign to require killers of police officers to receive minimum jail terms of 20 years.

It was announced in November last year that the Ministry of Justice would introduce a Harper’s Law Bill, and it is expected to be added to the statute book at some point this year.


MORE : Jeremy Kyle viewers condemn ITV over ‘uncomfortable’ Death on Daytime documentary: ‘Hey Ofcom you might want to have a word’