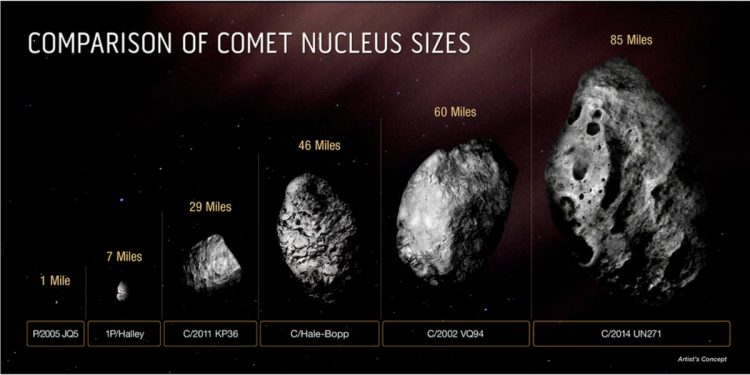 
A “behemoth” comet is making its way toward the inner solar system, according to data captured by NASA’s Hubble Space Telescope.

The comet — named Comet C/2014 UN271 — is currently located about 2 billion miles away and estimated to measure about 80 miles across its nucleus, NASA said.

Its size, which NASA noted is larger than the state of Rhode Island, is an estimation because the comet is still too far away for Hubble to tell for certain. The previous record for the biggest comet observed was held by C/2002 VQ94, with a nucleus estimated to span 60 miles across.

The comet’s nucleus is “about 50 times larger than found at the heart of most known comets,” NASA’s release said. It’s believed to weigh 500 trillion tons.

At 22,000 miles per hour, the comet is hurtling toward the inner solar system. But it will not get any closer than 1 billion miles from the sun by 2031, which is “slightly farther than the distance of the planet Saturn,” NASA said in a statement.

“This comet is literally the tip of the iceberg for many thousands of comets that are too faint to see in the more distant parts of the solar system,” David Jewitt, a professor of planetary science and astronomy at the University of California, Los Angeles, said in a statement to NASA.

Jewitt continued: “We’ve always suspected this comet had to be big because it is so bright at such a large distance. Now we confirm it is.”

Comet C/2014 UN271 was first discovered in November 2010, when two astronomers noticed it at a distance of 3 billion miles from the sun.

“This is an amazing object, given how active it is when it’s still so far from the Sun,” said Man-To Hui of the Macau University of Science and Technology, Taipa, Macau, lead author of a new study published in The Astrophysical Journal Letters.

“We guessed the comet might be pretty big, but we needed the best data to confirm this,” Hui said.