The Near Greatness of Yuriorkis Gamboa 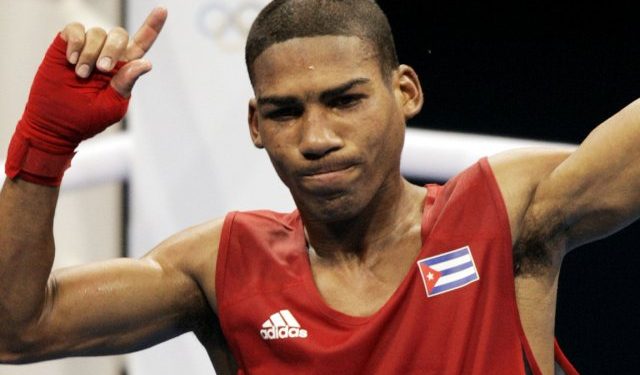 
If you were there to see it, then you already know how special Yuriorkis Gamboa was when he made his pro debut in April of 2007, at the age of 25. Before Gamboa made his way to that first professional fight in Hamburg, Germany, Gamboa’s life was already quite the story. He was a four-time national champion in his native country of Cuba and won gold at the 2003 Pan American games and again at the 2004 Olympics in Athens. He was a known quantity well before he left his amateur status behind.

Gamboa going pro is a story in itself. While training in Venezuela, Gamboa snuck out of camp and journeyed to Colombia, then Germany, before being granted a work Visa in the United States. The infamously insular culture of his Communist country was too restrictive a place to stay. After winning gold for Cuba, Gamboa had to sell his gold medal just to afford to buy a present for his one-year-old daughter.

“We had won Olympic gold for our country, but I didn’t even have enough money to buy a birthday present for my daughter. I asked myself: Why should I stay in a country where the ruling class doesn’t care about me even though I represent my country in the best possible way?” While most young fighters start their careers off slowly against marginal talents with mediocre records, Gambo did the opposite. His first two fights were against fellow prospects with a combined record of 13-1. His third fight was against seasoned veteran Joel Mayo, who sported a record of 40-11-1 before entering the ring against Gamboa. In fact, over the entirety of his 15-year career (consisting of 35 bouts), Gambo never once faced a fighter with a losing record – practically unheard of in this modern era of boxing, where fighters are often fiercely protected in the early portions of their careers.

With extraordinary hand speed, power, and athletic gifts that made you blink when watching him fight just to make sure you saw what you actually saw, Gamboa dominated his opponents in his first 14 fights (a blistering schedule over just two years) – winning 12 of those bouts by knockout. In just less than two years as a pro, Gamboa got his first title shot against Jose Rojas for the WBA interim world featherweight title, stopping Rojas in the 10th to claim his first belt.

While Gamboa was an electric talent with an all-action fighting style, there were vulnerabilities to be found in the fighter despite his then perfect record. Gamboa’s risk-taking maneuvers in the ring left him vulnerable to countershots. Just six months earlier, Gamboa had been dropped in the first round against the rugged, then-undefeated Marcos Ramirez. Gamboa bounced off the canvas and dispatched Ramirez in the very next round with overwhelming, lightning-paced combinations. An impressive response, to say the least, but also a dark harbinger of things to come.

After defeating Rojas, Gamboa defended his title three more times before taking on Orlando Salido in a title unification bout with the super featherweight WBA title and the vacant IBF championship on the line. Again, Gamboa was forced to rise from the canvas (this time in the 8th round) before rallying in the 12th, putting Salido down twice in winning a unanimous decision over his tough-as-nails Mexican opponent. Gamboa won his next four fights, moving up in weight class to take the WBA lightweight title before meeting Terence Crawford for the WBO lightweight title in Crawford’s backyard of Omaha, Nebraska, in June of 2014. In a true war pitting two undefeated champions against each other, Gamboa flummoxed Crawford over the first four rounds with his hand speed and footwork. Then, in the 5th, Crawford caught Gamboa with a right hook that sent Gamboa to the deck and changed the course of the fight. Crawford knocked Gamboa down again in the 8th and twice more in the 9th before the referee stepped in and called a halt to the contest.

A loss to Crawford is about as understandable as a defeat can be, but more than any other fighter, Crawford exposed Gamboa’s greatest weakness – his jaw. That’s not to say that Gamboa wasn’t tough. Over the course of his career, Gamboa was knocked down in 14 fights and won 10 of those contests – no mean feat. But Gamboa’s inability to adjust and become a better defensive fighter would cost him over the coming years.

To make matters worse, Gamboa signed with 50 Cent’s SMS Promotions in 2012 to represent him in and outside the ring. To say it was a poor match (largely because 50 Cent never truly learned the business of the sport – trying to get by on name recognition) is, to put it mildly. SMS had promised Gamboa three fights a year but could only close the deal on one fight in 2013, two in 2014, and none in 2015. For the still in his prime (if nearing the tail end of it), 34-year-old Gamboa, 50 Cent’s boxing promotion company, left a lot of money on the table that Gamboa will never be able to recoup.

After the loss to Crawford, Gamboa won seven of his next eight fights – although an upset TKO defeat at the gloves of journeyman Robinson Castellanos was a notable sign of Gamboa’s atrophying skills. Still, when Gamboa scored a second-round knockout over Roman Martinez in July of 2019, he earned his first title fight since his loss to Crawford, five and a half years earlier, this time against Gervonta “Tank” Davis for the vacant WBA lightweight title in a bout held in Atlanta, just before the 2020 new year.

Despite suffering a complete tear of his right Achilles tendon in the 2nd round, Gamboa soldiered on bravely (and unimaginably) for nearly ten more full rounds, getting knocked down three times, before the fight was stopped in the 12th. Gamboa’s next fight, against WBC lightweight champion Devin Haney, was a sad sight. While Gamboa was able to finish the fight, it was clear that the considerable skills he began his boxing career with had all but left him. Haney scored a unanimous decision, with complete shutouts on two cards and the third card (rather generously) finding two rounds for Gamboa.

That’s where Gamboa’s career stood last night before he carried his 40-year-old body into the ring against lightweight contender Isaac Cruz. I don’t mind telling you that I find it very hard not to root for Gamboa. He is a fighter with a heart greater than his jaw, and the distance between the sturdiness of those two body parts is simply too great – especially now as Gamboa has officially reached middle age. There were times last night when Gamboa flashed those electric skills that so transfixed many a boxing fan before the loss to Crawford. An occasional one-two or stiff right hand would allow you to hear those all too faint echoes of a prime long gone by, but they were far too few and far too between. When Cruz knocked down Gamboa for the fourth time in round 5, the referee did what Gamboa’s corner should have already done – save him from himself.

If you’ve been around the fight game for long enough, you know that most boxer stories end sadly – whether it’s a beatdown in the ring or a steep decline of physical and mental faculties off camera. I suppose many of us get hardened to that fact as familiarity with the reality of the sport becomes commonplace in our minds. But speaking only for myself, I’ve always found it hard to reconcile what these men and women give of their bodies, and eventually of their minds, before calling it a day. It’s an especially tough pill to swallow when thinking of someone so gifted as Yuriorkis Gamboa. A man with a fabled amateur career and an incredible sojourn to freedom, who went on to win titles in three different weight classes – defeating seven champions (Roman Martinez, Jason Sosa, Rene Alvarado, Darleys Perez, Daniel Ponce de Leon, Orlando Salido, and Jonathan Victor Barrios) in the process, and fighting for a world title on 11 different occasions over 15 years,

When you put his resume together in the nutshell of the previous paragraph, Gamboa’s career sounds like a storybook. But that’s the thing about boxing; looking at a career from 30,000 feet only tells you so much. Because if you saw Gamboa in those early years, it was hard not to feel a tingle in your spine and experience that hair-raising sensation that let you know you were looking at something special. And that’s what Gamboa was, special. He never ducked anyone either. Unfortunately, he also never learned to duck, and that’s what cost him a shot at true greatness.

Yuriorkis Gamboa is a grown man, and if he wants to continue fighting, I’m sure one (if not all) of the sanctioning bodies will let him. Personally, I hope we’ve seen the last of him in the ring. Because as Tom Hardy told James Gandolfini in The Drop, “You can’t redo it. All right? It’s done. It’s over. It’s been over for a while now.” It brings me no pleasure to say it, but for Yuriokis Gamboa, it’s over, and it’s been over for a while now.