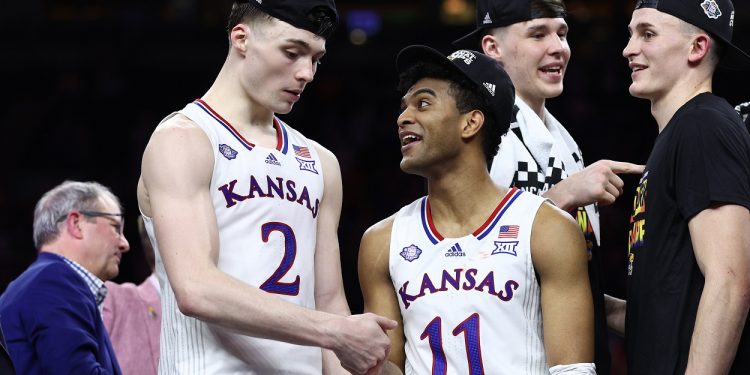 
The Kansas Jayhawks are the 2022 NCAA Men’s basketball national champions. They’re the winners of March Madness.

They defeated the North Carolina Tar Heels, 72-69, to bring the program its fourth title and second in the Bill Self era.

It was an incredible win by Kansas, made even more impressive by the fact that the Jayhawks were down 15-points at halftime.

They roared back in the second half and stole the game away from UNC. Two players in particular, Christian Braun and Remy Martin, became KU legends in the process.

Kansas displayed a total team effort against UNC, especially in the second half

This is not to simply highlight Braun and Martin’s role in the win because they were far from the only Jayhawks who stepped up against UNC.

In fact, outside of the second half of the first half, a period that saw North Carolina outscore Kansas 40-25, the Jayhawks put forth a total team effort on Monday night.

They made 43.9% of their field goals, which was in stark contrast to North Carolina’s 31.5%. They were feisty on the defensive end, notching six steals to UNC’s two. They were also much more efficient with the deep ball. Kansas shot 35.3% from three on 6-of-17 shooting. While not great, it was still much better than UNC’s 21.7% from downtown.

Four of Kansas’ five starters scored in double digits, with Jalen Wilson and David McCormack leading the way with 15. McCormack, in particular, was huge down the stretch for Kansas. He hit the bucket that gave Kansas a 70-69 lead with 1:21 to go and then another jump-hook with 22 seconds to ice the game at 72-69.

Something sparked Kansas at halftime

McCormack got a ton of credit after the game for his role in closing it out and Ochai Agbaji was named the Tournament’s Most Outstanding Player after averaging 17.8 points and 4.7 rebounds during the Jayhawks’ NCAA Tournament run..

While both players deserved their attention, Kansas wouldn’t be National Champions right now if it wasn’t for the clutch efforts of two massively underhyped players, Christian Braun and Remy Martin.

Braun had only scored two points in the first half and appeared to be invisible as his team struggled to score points and UNC’s defense clamped down.

Something shifted at halftime, though. Perhaps it was McCormack smiling at his teammates despite the massive deficit.

“I was like, why are you smiling, dude? We’re down 15,” Braun recalled after the game, according to ESPN. “He was telling me, keep your head up, keep going, we’ll be all right. I was like, man, I don’t know if I’ve ever been here before. Down 15 in a national championship game. I’ve definitely never been there.”

Perhaps it was Self reminding the team that his Jayhawks once came back from down nine with 2:12 in the game to beat the Memphis Tigers in the 2008 National Championship Game.

“Which would be harder, being down nine with two minutes left or being down 15 with 20?” Self asked his team.

No matter what it was, the Jayhawks came out highly aggressive in the second half and looked like a new team.

They started driving the rim and taking better shots, while in the meantime, North Carolina went ice cold from the field.

It was a recipe for a major comeback.

Braun reappeared for the Jayhawks and stole back the momentum for his team. He scored six of the team’s first 10 points coming out of halftime, and his drives to the rim were a significant reason for the tone shift in the game.

Kansas went from looking lost and overwhelmed by UNC to completely in control of the style of play.

Martin contributed three points in the first half but was largely ineffective, missing four of his five shots. Like with the rest of the team, something clicked in the second half, though.

Self brought him off the bench as the Jayhawks were in the midst of their massive comeback and he brought an extra “oomph” to the offense that helped Kansas get over the top.

Martin, a two-time All-Pac-12 player who transferred from Arizona State to play at Kansas, notched 11 points in the second half, nine of which came on confident and smooth shots from behind the arch.

“This year has been a tough year individually for me, just injuries and just hard to find a groove sometimes. But it felt great,” Martin said after the game. “In the second half, I just came in there, tried to make something happen and shot the shots with confidence and just tried to make plays.”

Speaking of making plays, none was bigger than Braun’s defensive play at the end of the game. The Tar Heels were inexplicably given one more shot to tie the game when Dajuan Harris Jr. stpped out of bounce while dribbling down the sideline with 4.3 seconds left.

UNC got the ball back and set up a game-tying shot for Caleb Love, who hit a massive three against Duke just two nights before in almost the same spot on the floor.

Love rose up for the three, but Braun’s 6-foot-6 frame and even longer wing span saved the day for Kansas. He didn’t block the shot, but he certainly bothered it as he forced Love into a fadeaway.

“We were trying to make him obviously take a two” Braun said after the game, according to kusports.com “It was just me and him one-on-one. I thought I got a pretty good hand up. It looked short from when he shot it. When I turned around, it was short. When it came off, I felt good.”

Braun felt good when the shot went up, but he undoubtedly felt even better when he saw the result of his great defense.

Rather than swish in like it did against Duke, Love’s shot didn’t even hit the rim.

Time expired, and Braun and the Jayhawks victoriously ran down to the opposite end of the floor as National Champions and Kansas basketball legends.

RELATED: Kansas Jayhawks’ Focus Makes Them Tough for North Carolina to Beat: ‘We Don’t Come to Kansas to Win the Final Four’