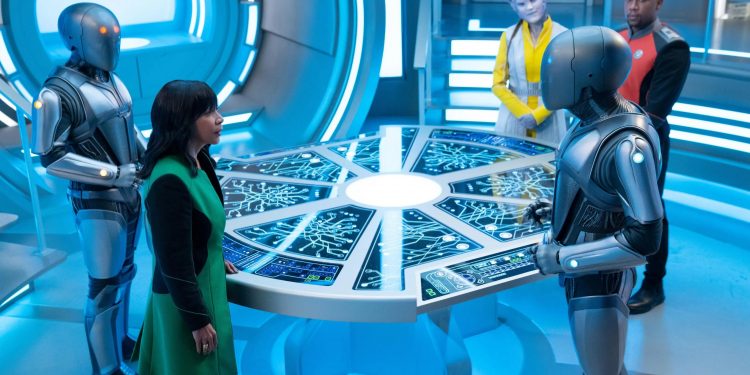 
Throughout the episode, writer David A. Goodman unveils a series of these vignettes where the family and the Kaylon (Graham Hamilton), referred to as K1, interact. Each interlude we see the family become more and more horrible to the (then) peaceful Kaylon, at first simply being rude to the indentured, laboring artificial intelligence, and eventually, abusing him. These specific anecdotes paint a more complete picture of the history of the Kaylon, and the “Builders,” the biological species that created the Kaylon, who fans of The Orville know will eventually be wiped out by their creation. The flashbacks add context to the discovery of a peaceful and fully emotional Kaylon named Timmis (Christopher Larkin).

While Commander Grayson (Adrianne Palicki) and Lieutenant Keyali (Jessica Szohr) are on the ship trying to convince a matriarchal species to join the Union, Captain Mercer (MacFarlane), Bortus (Peter Macon), Malloy (Scott Grimes), and Burke (Anne Winters) fly down to the surface of Citula 4, an allegedly abandoned planet, or so the crew thinks.

There, they discover Timmis, and immediately raise their weapons. But they’re greeted by a friendly and more human-sounding artificial being, with not a touch of hostility. Naturally, the Orville crew don’t trust Timmis, but he is soon joined by Doctor Villka (Eliza Taylor), who explains that she and her father, both renown cyberneticists, found Timmis after a battle with the Union. They decided to revive the barely functioning Kaylon, and in modifying his pain receptors, were able to infuse him with a full spectrum of emotions.

The episode’s script is arguably one of the most dense stories in the show’s 33 episodes so far. There is a lot going on, including the crew’s ruse to make the matriarchal Cissians believe the Union also treats males like second-class citizens, a subplot that points back to the incompatible sex life and relationship troubles of Lamaar (J Lee) and Keyali, and Burke’s continued mistrust of the Kaylons. Meanwhile, the central plot about the history of the Kaylon and Timmis’ evolution culminates with Isaac (Mark Jackson) having to make a life-altering decision in regards to whether or not he will have the procedure that will give him that same full spectrum of emotions, and what it may mean to Doctor Finn (Penny Johnson Jerald).

While hesitant at first, Isaac does in fact go through with the procedure, which leads to one of the sweetest moments in the show. Mark Jackson does not receive enough praise for his performance as Isaac. Having to portray a character devoid of emotion while still making him relatable is quite a feat. Granted, it is a Star Trek staple of sorts, as most iterations of that franchise have included a Spock or a Data-like-character within the crew to explore the intricacies of human behavior, and Isaac is clearly inspired by those classic characters. But Jackson has also had to convey this affability while completely faceless. The costume for Isaac only gives the actor the ability to convey subtlety through his voice (which often doesn’t modulate) or his body language, and still, the friendly Kaylon is a fan-favorite.

As the emotional levee breaks, Jackson gives a tremendous performance. The outbreak of real emotion begins with just a subtle smile from Jackson, which pulls viewers in, and as more emotions come flooding out, it all seems completely believable in terms of what Isaac could have had bottled up inside of him all along. The relationship between Isaac and Claire has been building for two seasons now and audiences finally get to see both of them happy and confess their love for each other.