The Racial Gap in Financial Literacy 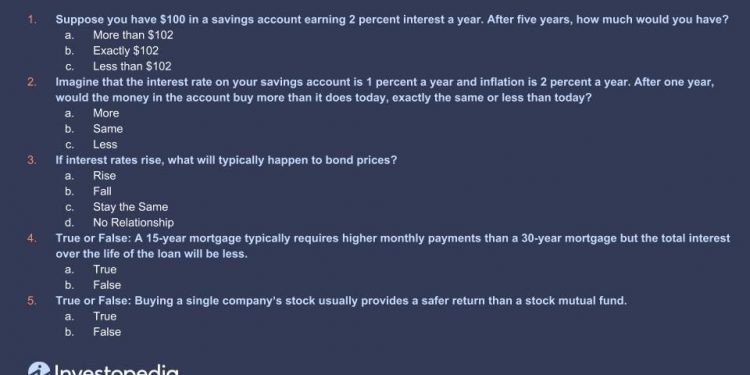 
What Is the Racial Gap in Financial Literacy?

Financial literacy is one of a few factors that affect the broader concept of economic well-being, which also includes the ability to make ends meet, plan ahead, manage financial products, and make good decisions. According to national surveys, basic financial literacy in the United States is generally low, and federal surveys reveal gaps among racial groups and ethnicities.

What Does the Data Say?

A 2018 Financial Industry Regulatory Authority (FINRA) national survey, the most recent available such survey, found that only about a third of American adults could correctly answer four out of five questions meant to assess basic financial literacy. In general, financial literacy is lowest among the young, women, and people with less education, according to a 2019 review of the data.

When categorized by racial or ethnic group, the data suggests that financial literacy rates are not evenly dispersed, with Asian-American and White test takers tending to score higher than Hispanic and Black test takers. The FINRA study reported that Asian and White Americans were able to correctly answer 3.2 out of six questions meant to assess basic financial literacy, while Hispanic Americans were able to answer 2.6 and Black Americans 2.3; both scores are below the national average. Native Americans were not specifically identified in that FINRA research, but a study of high school seniors found that Native American seniors have rates equivalent to Black and Hispanic seniors.

A gap also exists among youths. For instance, the 2018 PISA Financial Literacy Results data shows that White and Asian 15-year-olds have much higher financial literacy rates than Blacks and Hispanic populations of the same age.

There are also racial differences in economic well-being. Survey data on economic inclusion for 2019 from the Federal Deposit Insurance Corporation (FDIC) reveals that the portion of Americans who don’t use banking services, and thus are deemed “unbanked,” has declined. However, it also revealed that American Indian or Alaska Native, Black, and Hispanic households—as well as less-educated and younger households—are more prone to use bill payment services, money orders, and check cashing, which are often tied to financial insecurity.

Native American communities in particular suffer from higher levels of financial fragility and distress than most other racial and ethnic groups. They have roughly the same financial literacy rate as Black and Hispanic populations, which is lower than that of White and Asian American populations. Some studies suggest that Native American youths are of particular concern, as there is a large gap between them and non-Native youths.

The overall picture, especially in this broader context, can be complicated. Between 2009 and 2018, there was a general increase in Americans’ ability to cover costs but also a decline in savings, which was tilted by race, as well as a disparity in the rates of unexpectedly lost income.

Why Does the Racial Financial Literacy Gap Exist?

There are five primary sources of financial education: families, high school, college, employers, and the military. Studies of the national survey data say that education and household income are the two biggest factors in predicting whether someone has a high level of financial literacy.

Traditional accounts have laid some of the blame for financial illiteracy on lack of parental guidance and poor decision-making. However, recent studies have begun to argue instead that socioeconomic and political barriers are responsible. In other words, members of minority groups are channeled into using predatory financial services and denied access to sources of financial skills.

Explanation of the gender gap in financial skills focuses, in part, on the tendency of men to have more financial experience and education than women. A similar dynamic may be at play in the racial gap, abetted by structural barriers, as minority groups can have less access to wealth, higher rates of unemployment, and less education.

Analysis of the reasons why Native American communities in the U.S. lag behind White Americans in financial literacy, for example, points toward historical injustices—the legacy of which are high rates of poverty and unemployment, as well as other barriers that impact the broad concept of economic well-being. This specific blend of factors has left Native American populations with few opportunities to build financial skills, as well as few family sources of knowledge.

Why Does Financial Literacy Matter?

Financial literacy can have an impact on people’s financial well-being. The U.S. Financial Literacy and Education Commission—the federal body that makes recommendations for increasing financial literacy and education, created by the Fair and Accurate Credit Transactions Act of 2003—describes financial literacy as foundational for full participation in the market. The commission says that it is especially vital for “unlocking the foundations of economic opportunity” at the individual level and “powering a strong and resilient economy” at the national level.

As the use of credit cards, mortgages, and student loans has become more common, financial literacy has become more crucial because it correlates to a person’s ability to successfully navigate financial services. People without financial knowledge risk falling behind, particularly if they belong to racial groups that already earn less income.

The financial literacy gap also influences other notable metrics, such as the racial wealth gap, which is the measure of wealth held by different races in the U.S.

There are a number of public and private proposals for narrowing the racial gap in financial literacy.

The U.S. Financial Literacy and Education Commission’s 2020 proposal highlighted a set of changes to improve financial literacy in the country. It recommended establishing clear guidelines for financial educators, opening access to one-on-one financial counseling, and consistently measuring the results.

The report emphasizes the importance of tailoring financial literacy to the people and communities in need of education, which it says helps in key areas such as building motivation to learn financial tools.

In particular, the commission focused on the role of financial literacy in a robust economic recovery. The COVID-19 crisis highlighted both inequality and the vulnerability of some minority populations. Financial education was part of the federal government’s COVID-19 relief efforts. Of particular note was the vulnerability of at-risk populations to scams and their need for information about economic impact payments and unemployment insurance benefits, and about managing debt and surviving hardship. Other federal reviews of the existing financial literacy programs have also concluded that one-on-one counseling programs are effective.

Many resources and studies connected to the federal government exist. Although, as noted, profit motives can make it important to disentangle impartial advice from the available resources, as nongovernmental institutions also offer resources. Additionally, digital literacy programs are sometimes connected to advocacy organizations positioned to target them to the communities most in need. For example, the Native American Financial Services Association (NAFSA), a national, Native American–focused financial services association, released a digital literacy program in 2018. Programs such as the Native Financial Education Initiative provide resources specifically to tribal leaders and promote best practices to increase financial literacy in these communities.

The U.S. Government Accountability Office (GAO) issued a report in 2011 that said there is no government or certification process for organizations that offer financial information. However, there are U.S. Trustee Program and Department of Housing and Urban Development (HUD) approval processes for financial literacy providers specifically tied to bankruptcy and some housing programs. The report found that a government certification process would possibly improve the quality of available financial literacy programs but would come with high administrative costs.

Why Is Financial Literacy Important?

Financial literacy refers to a person’s ability to make good financial decisions. Without it, people will struggle to make ends meet, to plan their finances, and to achieve economic well-being.

Who Is Affected by Financial Literacy?

Everyone. Increasingly, people are expected to understand and make decisions in a complex financial environment, including managing and selecting credit cards, loans, banking, and insurance, and planning for retirement.

How Do I Acquire Financial Literacy?

A good place to start is by examining what’s included in the National Financial Capability study. The study tests what’s considered basic financial literacy. To test your knowledge, try FINRA’s quiz which can be found on its site. Then, focus on an areas where your knowledge is weak.