The Real Housewives of Atlanta Season 14 Trailer: Look Who’s Back! 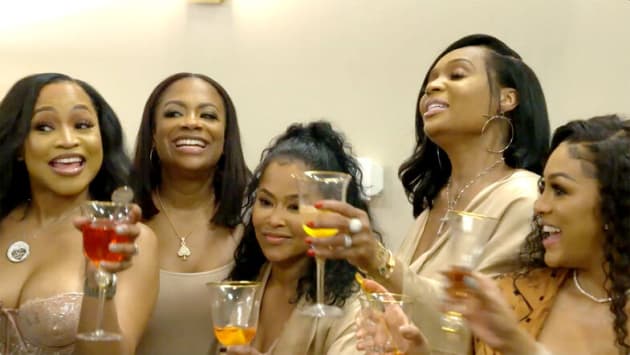 Gigantic blowouts. Messy Marriages. And an unexpected cameo from an old colleague.


The Real Housewives of Atlanta is nearly back in our lives!


Bravo has released the very first trailer for Season 14 of this beloved franchise, which will feature the return of Kandi Burruss, Kenya Moore and Drew Sidora.


The preview featured here centers on some reignited drama between Kandi’s husband, Todd Tucker, and her mother, best known as Mama Joyce… as well as a new strain in Drew’s relationship with her husband, Ralph Pittman.


As for Kenya?  After her appearances on Dancing with the Stars and The Real Housewives Ultimate Girls Trip?


Then there’s Shereé Whitfield, who hasn’t been on The Real Housewives of Atlanta since Season 10.


Her dream home is complete. Her business is doing well.


But then an old boyfriend comes back into her life, resulting in some complications and confusion for the returning Bravo personality.


Marlo Hampton (or “Marlo Fabulous F–king Hampton,” as she proclaims in this sneak peek), will also play a role on new episodes.


We’ll get to know Marlo like never before as she shares an intimate look at her life — raising her nephews and growing her fashion business, Lé Archive.


Elsewhere, this video marks our first look at Sanya Richards-Ross, a four-time Olympic gold medalist in track and field, a mother, a wife and a businesswoman.


Sanya will introduce us to her family on Season 14, as she and her husband (former NFL player Aaron Ross) contemplate having another child to join their four-year-old son Aaron… while also bringing the group to Jamaica to share her culture with the ladies.


Elsewhere, Kandi’s longtime pal, Monyetta Shaw, will appears this season as a friend of the cast.


The mother of two is a recent newlywed to husband Heath.


And, finally, which familiar face will be making a cameo? You’re so very close to finding out!


The Real Housewives of Atlanta Season 14 kicks off on Sunday, May 1 at 8/7c on Bravo. Check out the chaotic trailer now!