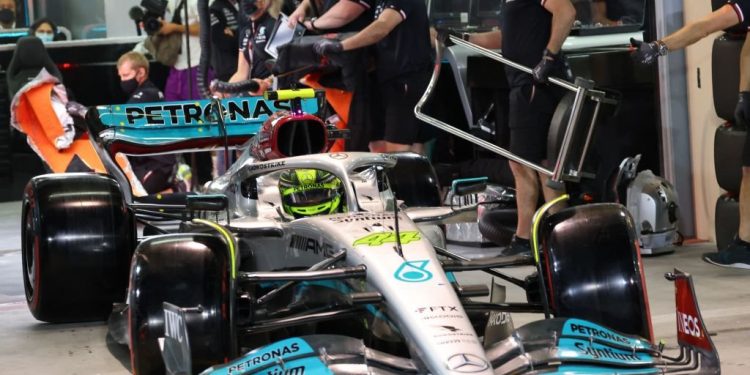 
One of the biggest talking points of the new Formula 1 season has been Mercedes struggling to match Ferrari and Red Bull – but why is the team so far off the pace?

All throughout pre-season testing, Mercedes was warning the Formula 1 world that it was off the pace thanks to the troubled birth of its W13.

But this was something that the team had done regularly throughout testing in years gone by, often turning up to the first race and sticking it one-two on the grid.

But Mercedes has not stuck it one-two on the grid for the season-opening Bahrain Grand Prix.

Hamilton was nearly 0.7s slower than pole-sitter Charles Leclerc for the season-opener – Russell even further adrift after a mistake.

But why is Mercedes struggling so badly in F1 2022? Is it something the team can fix?

Why Mercedes is struggling

The root cause of why Mercedes is struggling in the new F1 season is due to the bouncing that has badly affected the car.

As part of the new technical rules, ground effect has returned to F1 after decades away.

Essentially, you want to run your car as close to the track as possible to create downforce.

However, as the Mercedes is picking up downforce at high speed, the ride height of the car decreases.

This stops the airflow underneath the car – which causes it to raise slightly.

The car then lowers again as it picks up downforce, causing the whole cycle to begin again.

It is also known as porpoising.

Most of the teams have been affected by it in testing – but Mercedes are struggling more than most with the W13.

What can they do?

Mercedes believes its zero sidepod design machine does have some underlying raw pace – if they can unlock the potential of it.

The team could raise the ride height of the car to ensure it does not bounce – but this has performance ramifications.

Hamilton, Russell and the engineers need to find a way to run the car as close to the track without suffering the effects of the bouncing.

This is not the work of a moment – with the team believing it could be a few races before it can turn the situation around.

In other news, How to buy J Balvin’s 2022 tour merch and prices confirmed