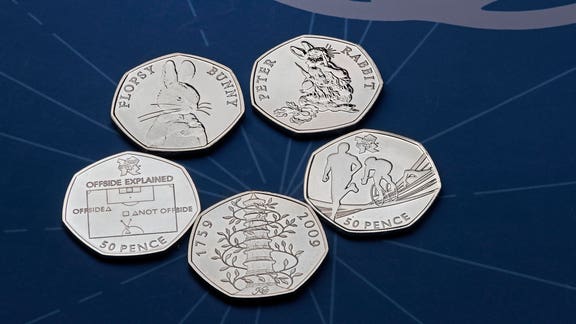 The move to ‘new money’ pounds and pence, happened 51 years ago this month, with the anniversary on 15 February 2022.

Since then, over 70 variations of the 50p coin have been circulating and several rare designs have been distributed.

The famous Kew Gardens 50p remains the most coveted coin in circulation, with a mintage of just 210,000, the Mint said.

Other rare designs include Olympic-themed 50ps minted in 2011.

Here, we look at the rarest 50p coins and how many of each have been made – and how much they could be worth.

What makes a coin valuable?

The 50 pence piece has become the most valued and collected coin in the UK, with many collectable designs appearing on its heptagonal canvas.

Its 27.5mm diameter makes it the largest of any British coin, and allows space for decorative pictures. It has often been used to celebrate big events over the past 50 years of British history.

The rarest coins tend to be of the greatest value, with the mintage (number of coins with each design made) being the fundamental attraction for collectors.

Along with the design, other aspects of the coin which increase value are the condition of the coin and whether it has an error in its design.

The way in which it is sold can also determine the coin’s value – while some coin collectors will bid vast amounts of money on ebay or at auction, others opt for more robust valuations by selling via a coin dealer.

What are the rarest 50p coins in circulation?

The Royal Mint has revealed the most valuable 50p coin, ahead of the 1971 decimalisation’s golden anniversary.

The rarest is the Kew’s Garden 50p, which was designed to mark the 250th anniversary of the gardens in 2009. Only 210,000 coins were ever minted with this design.

The other rarest coins stem predominantly from the 2011 Olympics, with the wrestling, football and judo coins among the most valuable. Only 1.1million of each of these coins were produced.

Flopsy bunny and Peter Rabbit designs which were produced in 2018 are also highly valuable.

These coins – 1.4 million of which were minted – depict the characters from Beatrix Potter’s novels and celebrate the life of the English writer and these sell for around £5.

These included one of Arthur Conan Doyle’s Sherlock Holmes, Paddington Bear at St Paul’s Cathedral and the Tower of London.

Here is a list of the top 10 most valuable coins, when they were made and how many were minted: