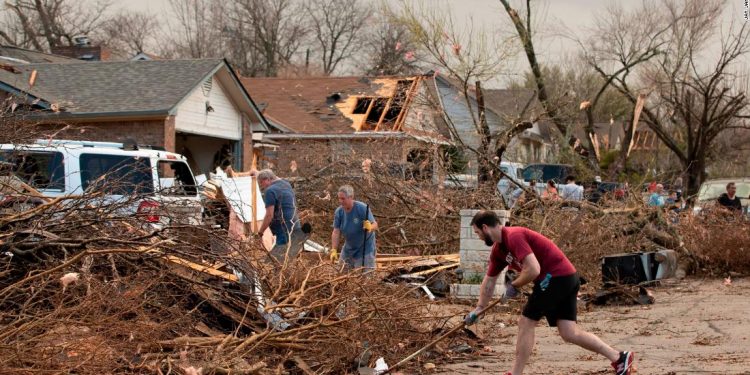 The five injured people were in a trailer in Beasley as the storm moved through the area, according to Jacqueline Preston of the Fort Bend County Sheriff’s Office.

More than a dozen tornadoes were reported across Texas on Monday. A 73-year-old woman in Grayson County died after her home was destroyed, as were dozens of other dwellings in the state, local officials said.

Tornado watches were in effect Tuesday afternoon for eastern Louisiana, parts of Mississippi and much of Alabama, with the area having significant threat of tornadoes through the early evening. Several tornado warnings have been issued in Alabama, meaning a tornado has been spotted or indicated on radar.

Winds were “howling along the Gulf Coast, where I can literally feel the atmosphere destabilizing,” CNN meteorologist Derek Van Dam reported Tuesday morning. “Almost like it’s gearing itself up for an afternoon of tornado mayhem. It’s time to have your severe weather preps in place in case the big one strikes.”

Wind gusts of 75 mph, large hail and “a few tornadoes with a couple intense tornadoes (are) possible,” the Storm Prediction Center said. The tornado watch is in effect until 7 p.m. CT.

“A regional severe weather outbreak appears likely across the Lower Mississippi Valley and central Gulf Coast States today into tonight,” the Storm Prediction Center tweeted. “Tornadoes, some of which should be strong, and potentially widespread damaging winds will be the most impactful hazards.”

Nighttime tornadoes are more than twice as likely to be deadly as daytime ones, the center said.

They “are particularly dangerous not only because people sleeping can get caught off guard, but because an oncoming tornado can be shrouded in darkness, making it impossible for someone who is awake to actually see it,” Van Dam said.

Added to that danger is the fact that few residents have basements in the Baton Rouge area, according to meteorologist Hannah Lisney of the National Weather Service there.

“The only protection we have is getting into interiors of our homes and hoping we don’t take a direct hit from a tornado,” Lisney said.

Houma preemptively opened storm shelters, she said, because of the number of modular homes in the area and leftover damage from last year’s Hurricane Ida.

Major cities in the storm’s path include Baton Rouge and New Orleans; Jackson and Gulfport in Mississippi; Birmingham, Alabama; and Memphis.

Aside from the tornado watch, millions of people from Louisiana up to Arkansas and Tennessee are under a flood watch, Ward said.

It’s important that people don’t forget about hazards other than tornadoes, including straight-line winds, large hail and flooding, Lisney said.

“Everything is on the table,” she said.

The system will weaken as it continues moving east Wednesday, bringing a slight risk of severe weather to areas including Atlanta and Charlotte, Durham and Raleigh, North Carolina.

20 tornado reports made in Texas and Oklahoma

Dozens of families lost their homes after the same storm on Monday pummeled swaths of Texas. At least 20 tornadoes were reported across Texas and Oklahoma, the National Weather Service said. 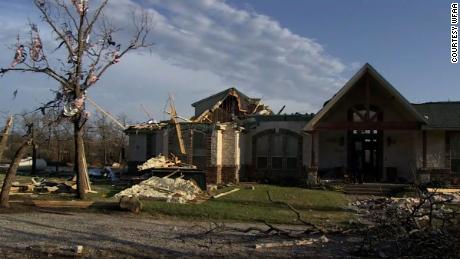 As of Tuesday evening, about 75,000 customers had no power in Texas, Mississippi and Louisiana — almost 40,000 of them in Texas, according to PowerOutage.us.
In Jack County — northwest of the Fort Worth area — 60 to 80 homes were destroyed, local officials said. The National Weather Service determined the tornado was an EF-3, with winds between 140 and 150 mph.

“Many of our homes have been totally demolished and families have been removed from their places of residence,” Jack County Judge Keith Umphress told reporters.

A shelter has been set up for those who lost their homes, officials said.

It was a miracle more people weren’t injured — especially at Jacksboro Elementary School, which was sheltering a large number of students as a storm badly damaged the gymnasium, Jacksboro Fire Chief Jeremy Jennings said.

The children were about to be released for the day when officials decided to have everyone go back inside, Jacksboro Police Chief Scott Haynes said. 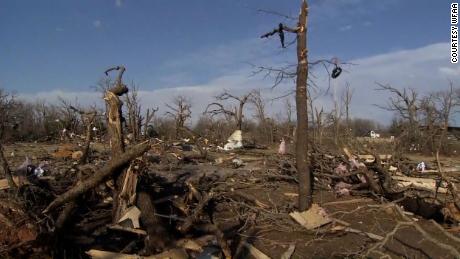 The gym at Jacksboro High School was also badly damaged and the facilities will be unusable “for some time,” Jennings said.

Elementary school students got “pretty emotional” when they left the school and saw the damage caused by the storm, Burnett said.

“When you can walk away and say that, so far, we’ve seen no major injuries and no deaths, with the devastation of what we’re seeing in our community and around our county — God’s hand was at work at keeping protection,” Jack County Office of Emergency Management Manager Frank Hefner said.

Jacksboro’s fire chief has never encountered such destruction in his community, he said.

“I’ve been a part of emergency services for 24 years here, I’ve never seen anything nowhere near this magnitude here,” Jeremy Jennings said. “Nothing like this, not even anywhere else in this county.”

An EF-2 tornado that blew through Houston County damaged 20 to 25 homes, according to Gov. Greg Abbott. “Despite the travesty of what occurred to property, the miracle is that no one lost their life,” Abbott said during a news conference in the county seat of Crockett.

The governor said that at about 10 people were injured, one seriously. 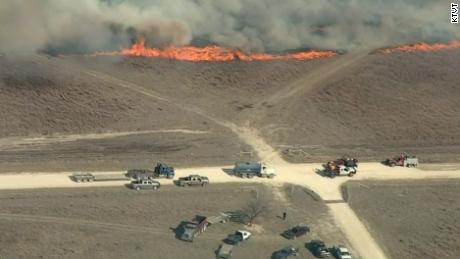 Farther south, in the Austin area, state agencies such as the Texas Division of Emergency Management and the Texas Department of Public Safety were responding to storm damage in Williamson and Bastrop counties, Abbott said.

A reported tornado moved through Round Rock in Williamson County around 6 p.m. Monday, authorities said.

An emergency declaration was already in effect in Williamson County due to the recent fires and will apply to storm damage as well, Abbott said.

“As we speak right now, I want everybody across the state that’s going through this to know, the state of Texas is going to be with you every step of the way,” the governor said.

While many homes, businesses and city-owned buildings suffered significant damage in the Round Rock area, only minor injuries were reported, Round Rock Police Chief Allen Banks said.

A deluge of much-needed rain

The storm has also dumped widespread rainfall of 1 to 2 inches, with some areas getting as much as 6 inches, CNN meteorologist Robert Shackelford said.

The severe weather struck as Texas was grappling with more than 170 wildfires over the past week — which had charred more than 108,000 acres, fire officials said.
The new rainfall should help with drought conditions in the region, Shackelford said, with another 1 to 4 inches of rainfall expected.

The Ukrainian girl who moved by singing “I’m free” in a shelter, performed the national anthem of her country in a stadium in Poland

The Ukrainian girl who moved by singing "I'm free" in a shelter, performed the national anthem of her country in a stadium in Poland