The Top 10 WWE rivalries, from Stone Cold vs. The Rock, to Triple H vs. Mick Foley & Shawn Michaels vs. Bret Hart

WWE’s history is written by some of the great rivalries that have kept fans coming back for more over the years.

Among the most gripping storylines have been Mick Foley vs. Triple H, Brock Lesnar vs. The Undertaker and even Vince McMahon’s everlasting feud with Stone Cold Steve Austin.

This is our list of the top 10 rivalries produced by the WWE.

10: The Undertaker vs. Kane

Brother vs. brother, or so how the WWE wanted fans to interpret it as.

Since 1997, when Kane burst on the scene accompanied by his and the Undertaker’s “father,” Paul Bearer, the duo have competed in almost every match the company has produced.

For over a decade, the Brothers of Destruction have fought in singles matches, in tag-team matches, in Hell in the Cell matches and even in two Inferno matches.

They have won singles titles and were even world tag-team champions over the years.

Their first match against each other came at WrestleMania XIV in 1998, where the Undertaker claimed the win over Kane after delivering three Tombstone Piledrivers.

Over the years, the two flipped back to friends but rivals made better viewing.

The 1992 Royal Rumble winner and WWE champion Ric Flair was challenged by Macho Man Randy Savage for the title at WestleMania VIII.

Flair, the high roller he was, never backed down from controversy as he began playing mind games with Savage, claiming to have had slept with his wife, Miss Elisabeth.

The Nature Boy even claimed to have had photos to prove it.

Savage went on to beat Flair at ‘Mania, but the victory was short lived as Mr Perfect and Flair attacked Savage after the match, injuring his knee.

Flair would eventually win his title back and the two would continue their rivalry until Flair left the WWE for World Championship Wrestling (WCW).

8: Edge & Christian vs. the Hardy’s vs. the Dudley Boys

The trio that redefined the tag team division in the WWE and paved the way for the new guys in today’s era.

The young trio stole the show at WrestleMania 17 in their tables, ladders and chairs (TLC) match that produced death defying moments.

These three teams constantly feuded over the course of several years, from their triangle ladder match at WrestleMania 16 to their two TLC matches at SummerSlam 2000 and at ‘Mania 17.

Edge and Christian would prove to be the better duo, walking away with the tag-team titles after all three matches.

7: Brock Lesnar vs. The Undertaker

The two competed in a series of matches dating back to 2002, before Lesnar’s WWE departure, but none compared to the storyline produced in 2015.

Undertaker made his WWE return a year after Lesnar broke his ‘Mania streak, attacking Lesnar during his match with Seth Rollins, costing the Beast the WWE title.

The two would go on to compete in two matches in 2015; the first was a single’s match at SummerSlam that resulted in an Undertaker victory after Lesnar passed out to the hell’s gate submission hold.

They then followed up their SummerSlam match with a Hell in a Cell match at the “Hell in the Cell” pay-per-view, which resulted in a Lesnar pin fall victory ending the rivalry.

Two of the biggest superstars in the WWE during the early 2000’s were involved in a feud that saw them headline three consecutive pay-per-views together.

In their Fatal Four Way match at WrestleMania 2000, Vince McMahon betrayed The Rock to help Triple H retain his WWE title, which set up a bitter feud between The People’s Champ and the McMahon-Helmsley alliance.

The two would meet at the post-WrestleMania pay-per-view, Backlash, with the help of Stone Cold Steve Austin, The Rock was able to overcome the odds and win the WWE title.

Their Iron Man match at the Judgment Day pay-per-view was the best of the duos rivalry, as Triple H took back his title after an interference by the Undertaker resulted in Triple H scoring the final pin fall of the match.

5: Hulk Hogan vs. Andre the Giant

The rivalry that started it all – the two biggest wrestling superstars of their generation Hulk Hogan and Andre the Giant.

The pair had fought 16 times, with Andre winning them all, before their epic clash at WrestleMania III in 1987.

Their bout at ‘Mania broke new grounds for TV viewership, reaching a whole new audience and helped the sport grow.

The slam heard around the world occurred when Hogan picked up Andre and body slammed him in the ring, blowing the roof off the arena.

Andre stood at 7’4 and weighted an enormous 520lbs, so the strength displayed by Hogan was remarkable.

Much like The Rock and Stone Cold’s rivalry, Triple H and Mick Foley feuded over the span of multiple separate storylines that started in 1997 and concluded in 2000.

In August 1999, Triple H reached superstar status when he pinned Mick Foley on Raw to capture his first world title.

Their rivalry reached its peak in 2000, with their street fight at the Royal Rumble pay-per-view and their Hell in the Cell match at the No Way Out event a month later.

Both bouts were fantastic and gruesome and helped pave the way for Triple H to join the elite of the WWE.

The bitter rivalry reached an end at WrestleMania 2000, when the two were involved in a Fatal Four Way match with the Big Show and The Rock.

The two best performers of their generations, the feud between Bret Hart and Shawn Michaels may have been the most venomous in the entire wrestling business.

Their rivalry began at WrestleMania XII in 1996, when Michaels defeated Hart in an Iron Man match.

In 1997, Hart was set to leave the WWE for the WCW, but he refused to give up his belt to Michaels at the Survivor Series pay-per-view that year, which set up the infamous Montreal Screw Job.

The Montreal Screw Job was a controversial unscripted incident in the Hart and Michaels match, where Vince McMahon and other WWE employees covertly manipulated the predetermined outcome of the match.

The final results of the match occurred without Hart’s knowledge and concluded with Hart controversially losing the title to Michaels in his last WWE match before departing.

After this, Michaels and Hart could never see eye to eye, until the two eventually buried the hatchet outside of the ring years later.

The two biggest WWE superstars during the Attitude Era, these two men set the tone for what WWE is today.

Stone Cold and The Rock headlined a record three WrestleMania’s together.

Whether it was on the mic or in the ring, these two icons brought the best out of each other and made everything they were involved in feel real.

Stone Cold would win most of their matches, but The Rock never felt any less credible because he constantly had the fans behind him.

Steve Austin competed in his last match at WrestleMania XIX against The Rock. The People’s Champ reigned supreme over the Texas Rattlesnake, finally defeating Austin at ‘Mania after two failed attempts.

What is the Attitude Era? 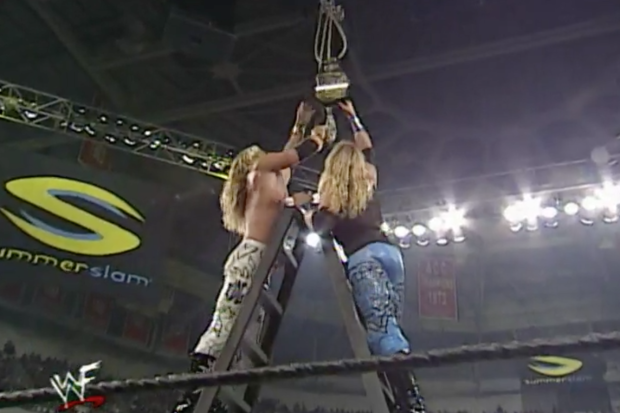 During the late 1990’s and early 2000’s WWE, then known as WWF, branded their programming as WWF Attitude.

Running from 1997 to 2002, the programming featured adult-oriented content, which included an increase in the level of depicted violence, profanity and sexual content.

The renegade and anti-hero, Stone Cold Steve Austin and the overbearing boss Vince McMahon created a fresh concept for the WWE in the late 90’s, something wrestling fans had never seen before.

The rivalry between the two fueled the company for years as future main event talent such as The Rock, Mick Foley and Triple H found their niche as a result of the McMahon-Austin rivalry.

The Rock may have given Austin his best matches, but McMahon gave him his most memorable moments and was the biggest reason why Austin was the face of the Attitude Era.

Austin’s first Stunner on the boss came in September 1997, which laid the groundwork for their legendary rivalry.

FOR THE KELL OF IT

WILL YOU MIRO ME?

The richest wrestlers in the world, including John Cena & Dwayne Johnson

Lesnar will not quit WWE unless AEW pay him £15.5m in wages, Kurt Angle says

Austin made an effort to infuriate McMahon every chance he got from hosing down McMahon and company with beer, to giving McMahon his signature one finger salute and even invading McMahon’s hospital room.

The stunts Austin pulled on his boss provided fans with a reason to tune in every week.

Their long-running rivalry ended in shocking fashion at WrestleMania X-Seven, when Austin and McMahon buried the hatchet in Austin’s home state of Texas to help the Rattlesnake capture the WWE title from The Rock.

Boy, 5, dies at wedding as granite table falls on his head moments after tragic final photo – The Sun

COVID-era ceremony was a delight to watch