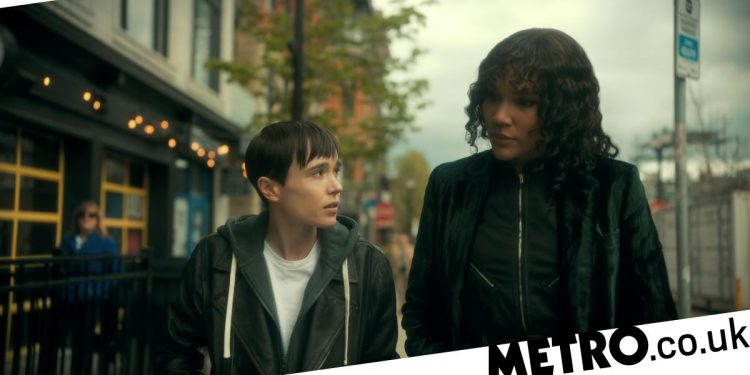 The new trailer for The Umbrella Academy season 3 is here…and we have more questions than answers.

The third instalment of the sci-fi will see the Hargreeves siblings come face to face with the Sparrow Academy – including their dead brother Ben (Justin H Min) – after they royally messed up the timeline of events.

It looks like things pick up right after season two’s ending, when the gang come home to find a whole other group of siblings being trained up.

‘When we jumped here, we created a time paradox,’ Five (Aiden Gallagher) explains. ‘Our little paradox brought forth the freaking Kugelblitz’.

‘What the hell is the Kugelblitz?’ Victor (Elliot Page) asks, with Five answering: ‘Essentially, we’re screwed’.

To make things a little more mind-boggling, while we see Elliot’s character Victor at the beginning of the trailer, Vanya also seems to make an appearance later on.

‘Your team’s good,’ Vanya says. ‘But I don’t think you’re better than me. I ended the world twice. And you? You’re just meat and spandex’.

The trailer ends on a bit of a bombshell as it’s revealed that Pogo is still alive.

Basically, it looks intense and we could not be more ready.

Elliot’s new character Victor was unveiled earlier this year after he came out as transgender.

The actor has, for the past two seasons, played Vanya Hargreeves in the Netflix sci-fi, which follows a group of adopted siblings with superpowers who attempt to stop the end of the world.

Sharing a snap to social media, Elliot, 35, showed his character sat at a diner counter looking a little different (but still completely badass).

Season two left us on the major cliffhanger of the Hargreeves siblings returning home to find that things are very different.

Not only is their adopted father Sir Reginald Hargreeves (Colm Feore) still alive, but he has formed a different group of superpowered individuals called the Sparrow Academy, which includes their brother Ben who, in their reality, died when he was a teenager.

Not long to go now!

The Umbrella Academy season 3 will start streaming on Netflix on June 22.

Only a fifth of Brits...

Paul Simon, 80, tucks into an ice cream as he and wife Edie Brickell, 56, enjoy Portofino holiday