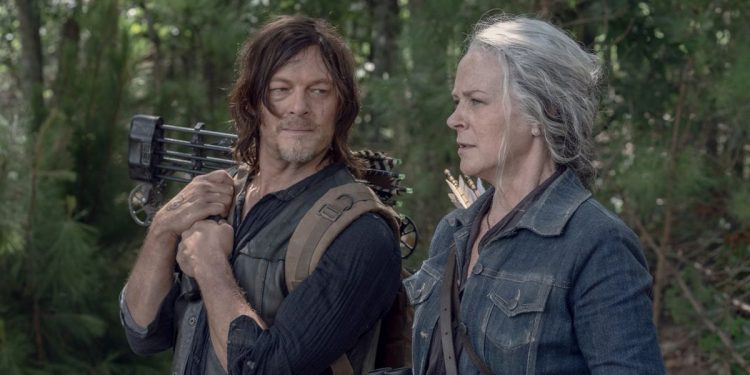 Voyeurs of post-apocalyptic catastrophes, listen up. The next portion of the final instalment – season 11 – of The Walking Dead is not far. We’re in the final stretch, and some exciting updates have emerged in recent days.

Here’s everything you need to know about The Walking Dead season 11, part 2 of 3.

What is The Walking Dead, again?

If you’re new to the series, The Walking Dead is based on a comic book series written by Robert Kirkman. In the simplest terms, the show covers the wild journey of a Sheriff who wakes from a coma and discovers he’s now living in a post-apocalyptic reality where zombies threaten humankind.

Binge’s synopsis for the final season reads as follows:

The Walking Dead resumes with many of our heroes fighting imminent hellfire under Reaper attack; while others battle Mother Nature’s torrential wrath in Alexandria. For all, their world is literally crashing down around them. Meanwhile, life in the Commonwealth is not as idyllic as it seems. For some, hope will be renewed. Others will be pushed past the point of no return. One truth holds tight: lives hang in the balance with each decision drastically changing their future, their chances of survival, and the state of each community.

There are a bunch of spinoffs and related series connected to The Walking Dead, so if you’re looking for a meaty binge-worthy universe of content to get into, this is a good option.

To start, Fear The Walking Dead is a six-season-strong series that dives into the events that lead to the zombie apocalypse. Stream that on Binge.

Next, you could move on to The Walking Dead: World Beyond. This series looks at the first generation of kids to grow up during a zombie apocalypse. You can catch this series on Amazon Prime Video.

A shiny new trailer has dropped

Binge has just dropped a new trailer for part 2 of the final season of The Walking Dead, so if you’re keen to get your eyeballs across that, check it out below.

For those who have not yet seen part 1 of The Walking Dead, season 11, you can watch a trailer for that here:

Who is in the final season of The Walking Dead?

Fans got their first glimpse of the final chapter for The Walking Dead with season 11 part 1’s drop on August 23, 2021.

Binge is the home of all 11 seasons of The Walking Dead. So if you’re keen to revisit any of the former seasons for a refresher or you just want to get your subscriptions in order for the new episodes, you can do that here.

Subscriptions to Binge start from $10 per month for a singular screen with standard definition streaming. There’s also a 14-day free trial if you’re unsure.

If you’re after more shows to stream while you wait for new episodes, here’s a list of the best shows on Binge, according to Rotten Tomatoes.