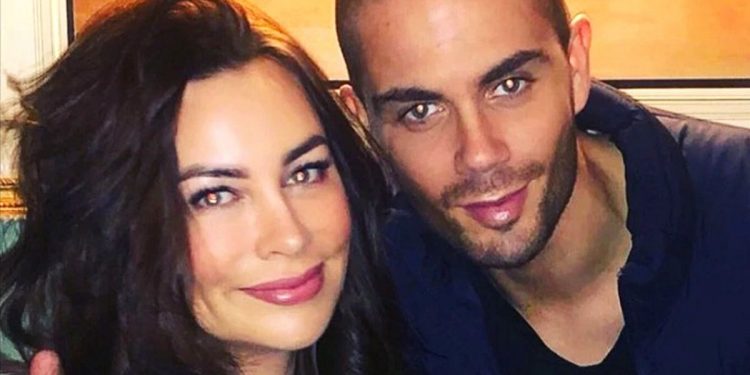 
Max George and Stacey Giggs have rekindled their romance less than a month after it was revealed they had broken up – and days following the tragic death of The Wanted’s Tom Parker.

The 33-year-old singer was first reported to be dating 39-year-old Stacey back in 2018 – with the shaven headed hunk moving in with the ex-WAG and her two children in Manchester.

But reports last month emerged revealing that the pair had called time on their four-year strong romance – and well over a year after he had appeared on Strictly Come Dancing.

Now the duo are said to have reunited after realising they made a rash decision to give up on their love following a rough patch, and now feel stronger than ever after spending three weeks apart.

A source told The Sun on Sunday: “Max and Stacey had a real rough patch and in the heat of the moment they called it a day. It was a very upsetting time for both of them.

“But now things have calmed down, they both felt they wanted to patch things up.

“They are back together and working through their issues.”

Stacey was previously married to footballer Ryan Giggs in 2007 but they split up in 2017 amid accusations that he had been having an affair.

The now ex-husband and wife share two children – Libby, 19, and son Zach, 15 – who Max took under his wing after moving in with Stacey.

Max himself was previously engaged to actress Michelle Keegan in 2011 but they split up in 2012.

The happy news of Max and Stacey’s reconciliation comes a week and a half after the devastating death of The Wanted star Tom – who lost a brave battle against brain cancer on 30 March.

In a heartbreaking tribute to his friend, shared last week, Max wrote via Instagram : “Tom, my brother, my boy, my band mate, my best bud.. You lit up so many lives all over the world but I can only speak on behalf of mine. From the minute I met you, I knew this was gonna be a special chapter in my life. I was right.”

He later touches upon their time together both on stage and how he was with him when he met his future wife Kelsey.

He added:”We did everything together, some amazing things, some outrageous things. Im so proud of what we achieved as band mates and as brothers. I’m also proud that I was there the night you met Kels. I remember saying to you, ‘you like her don’t you?’.. to which you replied, ‘bro, like you wouldn’t believe’. You two really are like peas and carrots.

During the tribute he praised his pal for his courage and compare him to a fierce ‘lion’ for his fight and bravery he had shown through his cancer treatement.

He continued:”Thank you for choosing me as your friend. It was an honour from day one. I’m so grateful I was with you until the very end. The courage and dignity I have witnessed over the last few months surpassed the lion I already knew you were.

“The huge hole now left in my life will forever be there, but I know your spirit will live on through your two beautiful babies, your wonderful wife, our music, your fans and in my heart.

“I’m heartbroken beyond words right now and I cannot even begin to imagine what the future holds without you, but whatever I do going forward, even on my darkest days, I can always smile and say, ‘I shared the stage with Tom Parker’.

“I am going to miss you so much. I love you mate. Always. George.”

Inside Jada Pinkett Smith’s “horrible” wedding to Will Smith