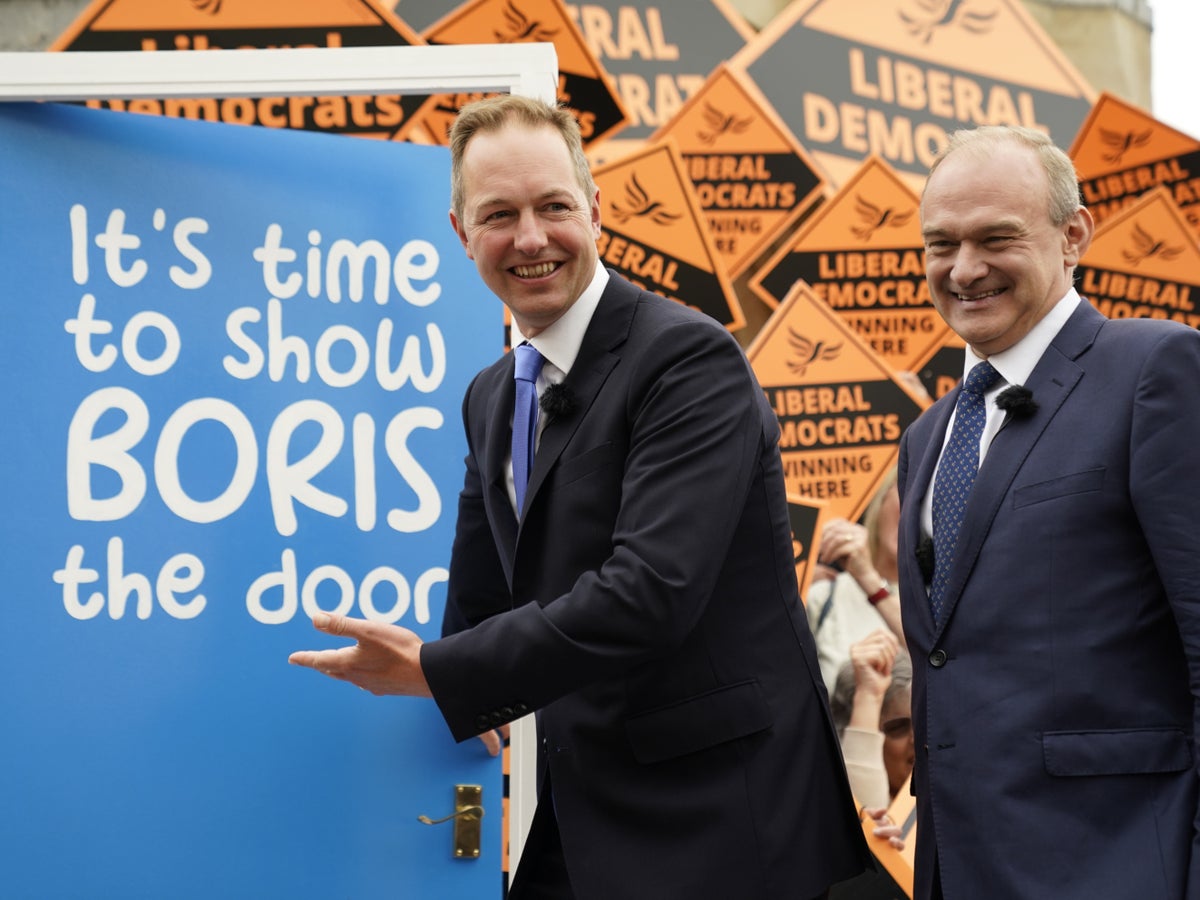 The Liberal Democrats have sometimes struggled to get media attention, usually losing out in column inches to Labour and the Tories.

As a result the party has developed a flair for imaginative and eye-catching media stunts.

To celebrate the liberal victory in Tiverton and Honiton this morning Lib Dem leader Ed Davey unveiled a door before waiting press. The joke was that he was “showing Boris Johnson the door”. Whether the prime minister takes the hint or not remains to be seen.

2) Knocking down a literal blue wall

But the door stunt is far from the first time Sir Ed has played a practical joke at the Tories’ expense. After the Amersham and Chesham by-election the Lib Dem leader brandished an orange hammer to knock down a literal “blue wall” constructed by his media team. The message was that the liberals were coming for Tory seats. The Independent understands it was a “nightmare” to find a suitably coloured hammer and that it was ultimately sourced via an emergency trip to Croydon B&Q.

The Lib Dems have had a very good run of by-election successes during this parliament, and perhaps an even better run of victory stunts. After winning the North Shropshire by-election in December last year Sir Ed popped a giant blue balloon, claiming it representing him symbolically “bursting Boris Johnson’s bubble”. The scalp of the wiley prime minister has yet alluded opposition parties, however.

But eye-catching stunts are not just for liberal victories. Paddy Ashdown famously ate his hat – or a cake version of it – live on BBC Question Time in 2015 after he carelessly used the idiom in a pre-election bout of fighting talk. He had said he would eat his hat if the polls were right to suggest the liberals would lose 47 seats; the party eventually lost 49.

On a similar theme, Nick Clegg also tried to galvanise his campaign in 2015 by taking to a zip-wire, apparently imitating an earlier stunt pulled by Boris Johnson. The photo-op led to headlines “Can Nick Clegg pull off his high wire act?”. The answer was, unfortunately for the deputy prime minister, no.

It would be wrong to talk about Liberal Democrat photo-ops without an honourable mention for former Scottish Lib Dem leader Willie Rennie. As leader from 2011-2021 Mr Rennie has such a fondness for photo-ops that Scottish newspaper the Courirer was about to compile 14 of his best for a retrospective piece, well beyond the scope of this brief article. He manhandled a ram, drove a Lamborghini, and attended a bakery to criticise SNP “half-baked” independence plans. During the party’s successful 2019 European election campaign he was seen jubilantly waterskiing in Townill Loch in Dunfermline, “riding the wave of possibility”.