The Wizards, minus four starters, stumble toward season’s end 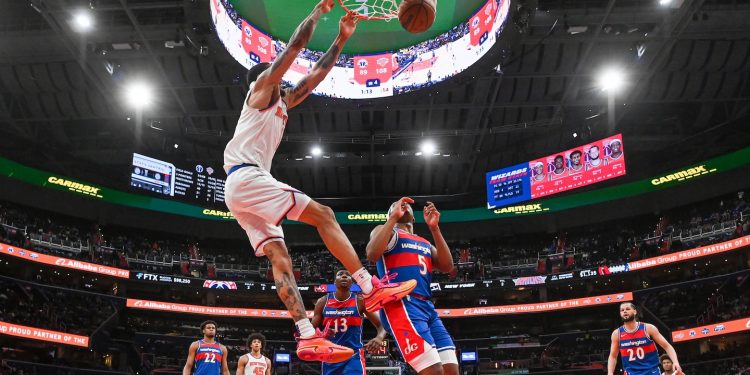 Those basketball gluttons who attended Friday’s Wizards-Knicks tankstravagaza at Capital One Arena had the delight of seeing a different side of Bradley Beal, Kristaps Porzingis, Kentavious Caldwell-Pope and Kyle Kuzma. They got to see their fashion choices while out of uniform.

Washington’s core four were riding the bench in a 114-92 loss to New York after the team shut down the veterans for the final two games of the season.

It plunked Caldwell-Pope and Porzingis alongside Beal, who had season-ending wrist surgery in February, and Kuzma, who has been out since March 18 with knee tendinitis, to save them from potential injury in the final two games. Without them, the Wizards’ young players went about getting a little burn at the end of the season — and helping their NBA draft lottery chances.

‘Everyone loves Ish’: Well-traveled Smith is the pied piper of the NBA — and the Wizards

Washington fell to 35-46 with one game left, at Charlotte on Sunday. The Wizards have the 10th-worst record in the league and a 3 percent chance at the No. 1 pick, which improved slightly only because one of the teams in the mix for that pick happens to be the Knicks (36-45).

Coach Wes Unseld Jr. rolled out Deni Avdija, Rui Hachimura, Daniel Gafford, Corey Kispert and Tomas Satoransky as his starting lineup, and Friday was the time to shine for those who had either fallen out of the rotation or gotten little experience throughout the season. Second-year pro Vernon Carey Jr., who arrived in the trade deadline swap with Charlotte, played his second game of the season — he saw seven minutes — after struggling for much of the year with injury. Isaiah Todd, the Baltimore product who signed with Washington in August, played his 11th game of the season.

Guard Raul Neto and center Thomas Bryant also saw action as well, with Neto bringing his old productivity. The guard had 14 points on 5-for-7 shooting in 20 minutes. Bryant didn’t score in 25 minutes but had 10 rebounds.

“I was just trying to enjoy and use the time on the court I had left,” Neto said.

Analysis: LeBron James has some thinking to do after a disastrous Lakers season

But nothing the Wizards had to offer could counter Obi Toppin at the perimeter. The forward hit career highs with six three-pointers and 35 points, leading four scorers in double figures and helping New York jump all over Washington’s 22 turnovers. At the close of the Wizards’ final home game of the season, a chorus of “Obi! Obi!” chants rang out.

“We’ve had an issue three of the last four games defending the three-point line,” Unseld said. “They’ve come in different ways: The pick and roll, whether it’s pulling up, isolation situations, our coverage spots, we just haven’t had urgency to get to shooters.”

Hachimura led the Wizards with 21 points as his team’s veterans looked on from the sideline.

Here’s what else to know from the Wizards’ loss:

The second-year forward played his 81st game of the season, a mark of durability after his rookie year was cut short by injury. Avdija had 11 points and four rebounds and went 5 for 11 from the field. He is one of five players in the league to have played every game this season.

Avdija wasn’t the only one with something to celebrate despite the low-stakes game: Hachimura’s 21 points matched a season high thanks to some more solid three-point shooting. He was 8 for 14 from the field, including 3 for 5 from three.

“He continues to be a bright spot and play at a high level, especially on the offensive end,” said Unseld.

Porzingis said he’s loving being in D.C. By the time the fourth quarter rolled around and there wasn’t much left to watch, he took to tossing T-shirts into the crowd — one surefire way to gain fans in a new city.