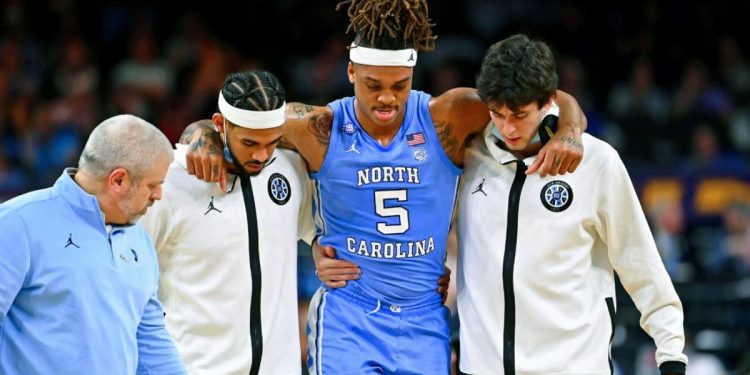 A day after Kansas defeated North Carolina, 72-69, in the men’s national championship game, the producer of the court for the men’s Final Four told ESPN that the spot on the floor where Tar Heels forward Armando Bacot rolled his ankle did not have structural problems.

Bacot, who finished the game with a double double of 15 points and 15 rebounds, rolled his already injured right ankle in the final minute of Monday’s game. In several slow-motion videos that circulated around social media, it appeared that a piece of the floorboard flexed slightly under Bacot’s foot moments before he re-injured his right ankle.

However, Jeff Krejsa, the vice president or marketing and strategy for Connor Sports, said to ESPN that “there were no loose floorboards” on the court.

“The court’s absorption characteristics are by design, and there were no loose floorboards or panels within the court, as confirmed by an expert technician who was present at every game of the men’s Final Four to ensure the quality and safety of the floor,” Krejsa said to ESPN.

“The Championship floor, as is all the floors, is a panel system engineered for athlete safety and comfort, achieved by its ability to absorb impact forces as an athlete jumps or pivots abruptly while also ensuring that other players nearby are not negatively affected.”

Immediately after rolling his ankle in the final moments of the game, Bacot hobbled down the court on his left leg before officials blew the whistle of his apparent injury. Bacot exited the game and did not return.

After the game, Bacot was seen in a walking boot following his injury.

Per ESPN, North Carolina athletic director Bubba Cunningham said the program had not contacted the NCAA about the issue concerning the court as of Tuesday afternoon.

The Tar Heels star forward also did not make a postgame comment about the floorboard issue. However, he felt like he was making a good move to potentially score the basketball for his team—who was trailing by one point— before rolling his ankle.

“I thought I really got the angle I wanted,” Bacot said on Monday. “I thought it would have been an easy basket.”