These corporations celebrate LGBT+ people. They also back politicians behind a bill to ‘erase’ them from schools 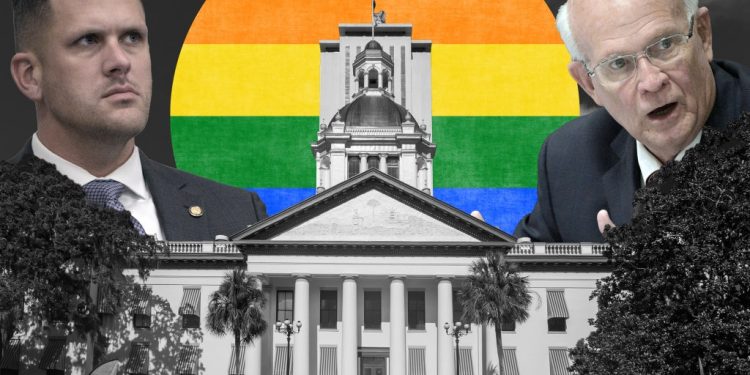 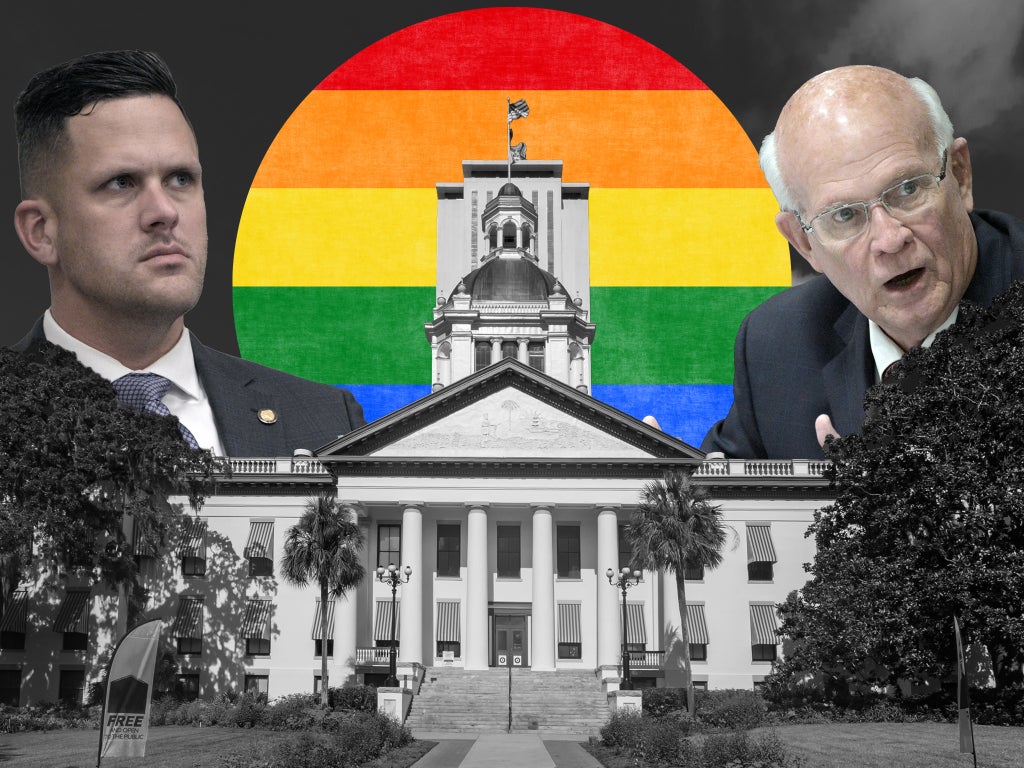 The Walt Disney Company was recently named one of the Human Rights Campaign’s best places for LGBT+ people to work for the 16th year in a row, a distinction the company credits to its benefits for same-sex couples, support for transitioning workers and corporate training on LGBT+ inclusion.

“Through employee service and company donations, Disney also has been a longtime supporter of organizations that support the [LGBT+] community and work toward equality,” the company said in a statement in January.

Disney entities and more than a dozen corporate giants and their political fundraising arms have donated thousands of dollars to Florida Republican legislators supporting the legislation – which passed the state’s House of Representatives on 24 February – while celebrating Pride Month and publicly championing LGBT+ advocacy.

Critics of the legislation – which could forcibly “out” students and prohibit discussion of “sexual orientation or gender identity” in Florida schools – have warned it could endanger the lives of LGBT+ young people and have a chilling effect on LGBT+ schoolchildren and their families.

“Selling rainbow-coloured merchandise in June every year is not allyship, it’s marketing,” Equality Florida press secretary Brandon Wolf told The Independent. “LGBTQ people are a thriving and growing part of society, and it’s important that these companies that ask us to support them … return that favour by making good on the promises they make during Pride Month and otherwise.”

The Walt Disney Company did not return The Independent’s requests for comment.

Top donors to Rep Harding and Sen Baxley – including utilities provider Duke Energy and multinational telecommunications company Comcast – have contributed tens of thousands of dollars to their 2022 and 2020 campaigns as well as the legislators and Florida officials who have ushered the bill’s passage, all while issuing statements committing their brands to LGBT+ causes.

Other corporations who gave thousands of dollars to support the legislation’s chief sponsors, the legislators who voted to support it, and Governor Ron DeSantis since 2020 include Charter Communications, United Healthcare, Publix, AT&T, Walgreens and Amazon, among others, according to reporting from Popular Information.

Florida’s “Parental Rights in Education” bills – named “Don’t Say Gay” by its opponents – bars instruction of “sexual orientation or gender identity” through the third grade and any discussion “that is not age-appropriate or developmentally appropriate for students” in other grades.

“The existence of LGBTQ students and parents is not a taboo topic that has to be regulated by the Florida Legislature,” the group said in a statement last month.

Comcast NBCUniversal “is committed to creating a more equitable, just and inclusive company for our employees, customers and communities,” the company said in a statement recognising Pride Month in 2021.

Since 2020, Comcast has given more than $28,000 in total to supporters of the legislation, including the two leading sponsors and legislators who approved the bill in committee.

Comcast is among 25 major corporations that have heaped donations on members of Congress with a “zero” rating from the Human Rights Campaign’s congressional scorecard, according to a report from Popular Information.

Comcast has donated more than $1m to politicians with poor records on LGBT+ legislation and advocacy within the last few years, Popular Information reported.

The company did not return The Independent’s requests for comment.

Earlier this month, Duke Energy announced that it received a “perfect score for the fifth year in a row” from the Human Rights Campaign’s workplace index. Duke Energy’s chief diversity and inclusion officer Cameron McDonald said the company is “guided by our vision of an inclusive environment where employees feel a sense of belonging.”

“We make sure to integrate diversity and inclusion into everything we do,” she said in a statement.

Duke Energy’s political action committee gave $1,000 each to the 2022 re-election campaigns of Rep Harding and Sen Baxley. It also gave Rep Harding $1,000 in his 2020 campaign.

In total, Duke’s PAC has donated at least $34,000 to Florida legislators who now support “Don’t Say Gay” legislation, including $25,000 to Governor Ron DeSantis.

Company executives have previously used their platform to pressure lawmakers to revoke legislation aimed at LGBT+ Americans, including a 2017 law in North Carolina, where the company is based, that prohibits transgender people from using bathrooms that match their gender identity.

At the time, Duke CEO Lynn Goode joined a group of business leaders urging legislators to repeal and replace the law.

Duke Energy did not return The Independent’s requests for comment.

The legislation in Florida joins a nationwide effort to put “parental rights” at the forefront of GOP campaigns in 2022 elections, from school board debates and legislation condemning Covid-19 protocols to perceived “critical race theory” curriculum in classrooms and in human resources initiatives.

Another Florida bill, introduced by Governor DeSantis as the “Stop the Wrongs to Our Kids and Employees” Act, or “Stop WOKE” Act, would bar classroom discussions that could make students feel responsible for historic wrongs because of their race, colour, sex or national origin, which critics argue would censor lessons on racism and injustice. It also would apply to workplace diversity training sessions, which could be considered an unlawful employment practice subject to a lawsuit or civil rights violation.

Supporters of Florida’s Parental Rights in Education bill insist that its opponents have falsely characterised the bill’s intent.

Rep Harding told House legislators during debate on 22 February that the bill does not target specific students and ensures that parents “have a right to be critically engaged in issues that impact their students.”

The governor also has rejected anti-LGBT+ characterisations of the latest legislation, saying that “schools need to be teaching kids to read, to write”.

“The larger issue with all of this is parents must have a seat at the table when it comes to what’s going on in their school,” he told reporters in Miami earlier this month.

Bill sponsors have repeatedly said that the legislation is not about LGBT+ students or families but giving parents more control over their children’s instruction. In response, bill opponents introduced an amendment that would strip the language about “sexual orientation and gender identity.” The amendment failed on a party-line vote.

A “fiction vs fact” image shared on social media by the Florida House Republican Majority Conference, alleging that the bill’s opponents falsely claim that the bill “bans the word ‘gay’ in the classroom,” said that the bill instead “bans classroom instruction on gender identity and sexual orientation in kindergarten through [third] grade and requires age and developmentally appropriate instruction in accordance with state standards for other grades.”

Opponents argue that it’s a distinction without a difference.

“The problem is this bill is not a parents’ rights bill,” he said. “The bill censors speech about LGBTQ people in classrooms and ultimately it serves to chill the kind of inclusive environments we’ve sought to create for LGBTQ young people … What about the rights of LGBTQ parents to be seen and heard in the classroom? Those parents deserve to see their families reflected, to see their children celebrated.”

Rep Harding withdrew an amendment that would have required schools to disclose whether a child is LGBT+ to their parents within six weeks of learning whether they are not straight, and appeared to remove protections for students who would have potentially been subject to abuse, abandonment or neglect by their families.

The bill is among more than a dozen state-level proposals that could ban discussion of LGBT+ issues in classrooms, and among dozens of state legislative proposals that discriminate against LGBT+ people, according to the American Civil Liberties Union.

In a letter on 21 February, a group of congressional Democrats urged Florida legislators to drop the bill, warning that the legislation fits into an “alarming trend” of threats to academic freedom that exploits LGBT+ children for political discourse.

“We ask that you consider the harmful toll this legislation would have on LGBTQ+ children’s mental health and individual liberties in education, oppose these bills, and do not bring them to a vote on the floor of the Florida House or Senate,” they wrote.

Florida Democratic congresswoman Debbie Wasserman Schultz said that “those who are now considering whether to vote for this hate-driven bill must reckon with an all-but-certain reality: If this ‘Don’t Say Gay’ bill becomes law, its isolating impacts will ensure that even more vulnerable LGBTQ+ children will suffer, and some will die.”

Forty per cent of homeless youth in Florida identify as LGBT+, according to the ACLU of Florida.

A 2021 report from LGBT+ suicide prevention and crisis intervention group The Trevor Project found that LGBT+ young people who learned about LGBT+ people or issues in school were 23 per cent less likely to report a suicide attempt within the last year.

Another report from the organisation found that LGBT+ youth are four times more likely to seriously consider, plan or attempt suicide than their peers, while LGBT+ young people between the ages of 13 and 24 attempt to kill themselves every 45 seconds within the US.

Rumour has it another Nintendo Direct is coming next week

Bethesda is a good developer but Microsoft is making them worse