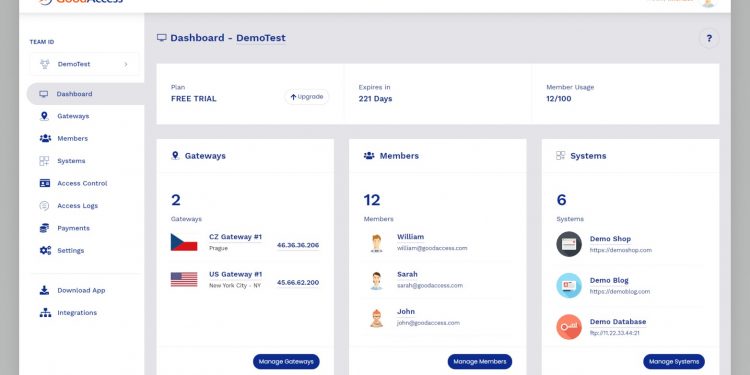 
The cloud VPN provider GoodAccess has announced the launch of its new Starter plan that allows even smaller companies to get access to a capable business VPN service for free.

With the company’s new Starter plan, SMBs and even startups can create a cloud-based business VPN for up to 100 users for free without the need to build their own hardware infrastructure.

Despite being free, GoodAccess’ new plan ensures the security of remote work, encrypts user connections with business systems, protects sensitive data and even blocks online threats. Compared to other free VPN offerings, the GoodAccess Starter plan doesn’t feature any advertising nor is an organization’s browsing data sold to third parties.

Co-founder and CEO of GoodAccess, Michal Cizek explained why the company decided to release its new free Starter plan in a blog post, saying:

“At GoodAccess, we believe that everyone who has the need should be able to secure anytime-anywhere access for their business without having to spend hours fussing over infrastructure. Releasing the free Starter plan is a logical step along our mission.”

With GoodAccess’ new Starter plan, every time a business user connects to the cloud VPN, the service will automatically seek out the nearest gateway location with the lowest latency to ensure the smoothest possible experience. While the company’s free plan dynamically assigns IP addresses to users, organizations that need a static IP address will need to upgrade to one of its paid plans.

In terms of clients, GoodAccess Starter offers them for Android, Windows, iOS and macOS so that even free users can connect to a VPN on desktop as well as on mobile. In order to protect the sensitive business data sent over its VPN, GoodAccess uses encryption on the network layer to provide more in-depth encryption of the communication as a whole as well as the payload.

DNS filtering is often the first line of defense against a variety of online threats including phishing and network-borne attacks like botnets, port scanning, etc. GoodAccess’ Threat Blocker is its implementation of DNS filtering and it operates on the VPN gateway to protect users and alert administrators regarding any malicious presences on their network. The new Starter plan also includes the full protective capability of the company’s Threat Blocker though paid users get access to more granular reporting.

Businesses interested in testing out GoodAccess’ new Starter plan can sign up for a 14-day free trial and afterwards they can decide if they want to stick with the company’s free plan or upgrade to one of its paid plans instead.