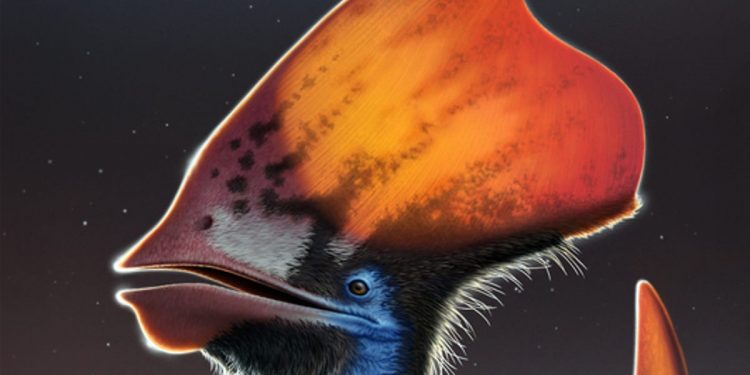 Whether it is the bright red of a cardinal or the distinct patterns of parrots, avian species are known for their colorful feathers. Now, some new research suggests flying creatures that dominated prehistoric skies millions of years ago had colorful plumage, too – and were even able to change those colors.

Although not birds, pterosaurs were relatives of dinosaurs as they roamed the world’s skies millions of years ago. They were some of the biggest creatures during the Mesozoic Era – roughly 230 million to 66 million years ago – as research has found kinds with an 8-foot wingspan and razor sharp teeth, as well as one with a 40-foot wingspan and giraffe-like neck.

While they were known to exist, scientists were unsure if the creatures had feathers, as there no definitive answer for when animals began to grow feathers.

Meanwhile, a team of international researchers were examining the 115-million-year-old fossil of the pterosaur Tupandactylus imperator. Found in northeast Brazil, this type of pterosaur had a wingspan of 16 feet and was known for its huge headcrest.

The team discovered that the bottom of the crest had a fuzzy rim of feathers, with short wiry hair-like feathers and fluffy branched feathers, giving the first evidence the pterosaurs had feathers. The findings were published in the journal Nature on Wednesday.

“We didn’t expect to see this at all,” Aude Cincotta, paleontologist at University College Cork in Ireland and lead author of the study, said in a statement. “For decades paleontologists have argued about whether pterosaurs had feathers. The feathers in our specimen close off that debate for good as they are very clearly branched all the way along their length, just like birds today.”

While the team discovered the feathers, the next step was finding out if there was anything unique about them, and if they served any purpose.

Touch a Jurassic-period fossil and go river rafting?: This destination offers both.

Using high-powered electron microscopes, researchers found preserved melanosomes, or granules of melanin. The melanosomes showed there were different feather types and shapes, showing pterosaurs were able to manipulate the colors.

“In birds today, feather colour is strongly linked to melanosome shape,” said Maria McNamara, paleontology professor and University College Cork and co-author of the study, in a statement. “Since the pterosaur feather types had different melanosome shapes, these animals must have had the genetic machinery to control the colors of their feathers. This feature is essential for color patterning and shows that coloration was a critical feature of even the very earliest feathers.”

Scientists say pterosaurs also could have used their different colored feathers to communicate with one another, although they are unsure how and what the communication was like. However, researchers think this will lead into further researcher into pterosaur behavior.

Masked Singer fans react to Rudy Giuliani unmasking and Ken Jeong’s walk out: ‘I can’t believe this was aired’ – The Independent