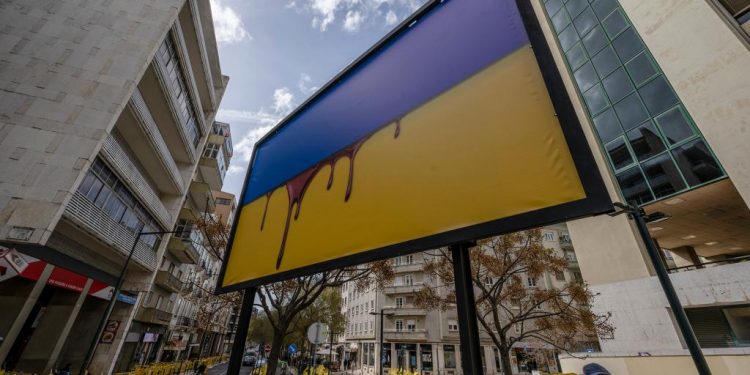 
In Ukraine, where city dwellers are often scrambling for cover, the nation’s biggest delivery app has resumed service.

The 2,000 plus couriers who have signed up to work for Glovo in the war-torn country have fanned out now to 23 cities, where they deliver groceries, restaurant meals and prescriptions to people who are often hurting for basic necessities.

Glovo says the couriers — whose signature backpacks caused a stir on social media when one was photographed full of assault rifles — want to work despite the dangers: They need the money and say they’re proud to be delivering the things of everyday life to people in need.

It’s a service that concerned family members and friends are using from afar: Last week, Stephan Soroka, a Ukrainian who has been living in Prague since the war started, says he sent his girlfriend’s family some juice, chocolates and snacks.

It took just 40 minutes from the time Soroka placed the order to when the Glovo courier arrived, Soroka said. Glovo is not exactly promoting the service for faraway orders because it can’t guarantee delivery times — and Soroka confirmed it took him several tries to get his order placed.

Still, he said, “during a war when the city is under constant threat of rocket attacks, it’s amazing to have an opportunity to get the necessities for your loved one.”

The Glovo app notified Soroka, who’s the chief business development officer for wearyourbrand.org — a provider of delivery gear — that the courier had arrived and he told his girlfriend’s brother to meet the courier at the entrance of the apartment building.

The courier, according to Soroka, said he makes about 10 deliveries a day that are interrupted by air raid sirens and frequent checkpoints by authorities. Glovo, the courier said, has been “paying well” but that it’s a “dangerous” job.

The company halted its operation in Ukraine on the day the war started on Feb. 24, but just two days later it dispatched hundreds of couriers in the safest cities at that time in the west of Ukraine, including Lviv, Drigibych, Chernivtsi, Uzhorod and Truskavets.

In the first week of March, Glovo couriers completed 10,000 deliveries in Ukraine.

Glovo’s couriers said they needed to work, a company spokesperson, Kasia Kosior, told The Post in an email — and some were already.

“We decided to reopen cities so they can use our technology,” Glovo spokeswoman Kasia Kosior wrote in an email, noting that some couriers were already volunteering their services to ad-hoc groups that had sprouted up to keep supplies flowing to citizens.

“We can offer secure connection, better coordination, safety protocols, insurance, and they get paid while doing what they want to do [in additions to getting] access to food for themselves and families,” Kosior said.

Glovo, which was acquired in January by German giant Delivery Hero, is waiving the fees and the commissions it normally charges businesses. Consumers pay a fee that is donated to a Ukrainian nonprofit, Come Back Alive. “We have stopped thinking of Glovo as [a] business,” Kosior said.

The couriers are receiving “higher bonuses” Kosior said. “They are the heroes on the street,” she added. They also receive local and international medical insurance “in case of any accident,” she added.

And when air raid sirens go off, the app is immediately turned off.

The decision to relaunch in Kyiv on March 9 was complicated by a lack of supplies to deliver and a dearth of couriers, Dmitry Rasnovsky, general manager of Glovo, said recently in a podcast interview “Friday Takeaway.”

“When we decided to relaunch we realized that not many partner restaurants and supermarkets” are open, the executive said. “But there is huge demand in Kyiv for groceries and prescriptions.”

What is Australia’s troop carrier the Bushmaster and how will they help Ukraine?

What is Australia's troop carrier the Bushmaster and how will they help Ukraine?