‘This moment was an explosion’: Broadway makes progress on racial equity 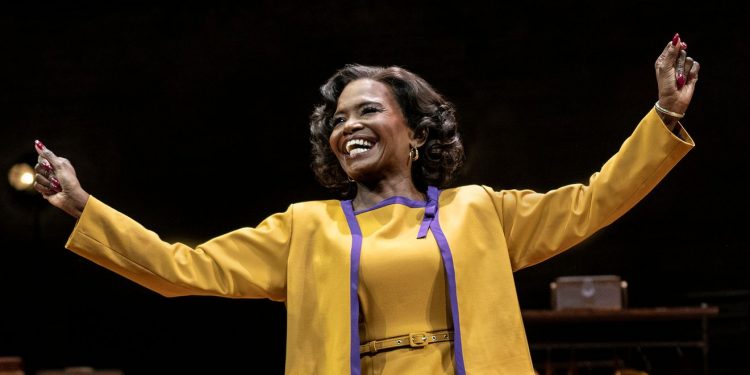 Ever since the pandemic forced Broadway to shutter theaters in March 2020, the industry has faced a never-ending series of challenges.

The virus has been the primary one, of course. The health crisis brought Broadway, whose box-office tally reached a record $1.83 billion in the 2018-19 season, to a complete standstill until the middle of 2021. And while shows have started opening again, schedules have also become wildly unpredictable, with cancellations aplenty due to cast members suddenly infected with COVID-19.

But the other key issue is one that arguably cuts much deeper and has longer-term implications: a racial reckoning that emerged in the wake of George Floyd’s murder by former Minneapolis police officer Derek Chauvin, and the broader resurgence of the Black Lives Matter movement.

The theater community has often prided itself on being forward-thinking and presenting work that tackles tough issues, including those involving race. But critics have charged that Broadway has failed the diversity test on many levels — both in representation among playwrights and other creative talent behind the shows and in the makeup of cast and crew.

Now some industry veterans say there’s finally reason to be hopeful, pointing to a wave of recent developments.

“Change is happening. People are not ignoring what is being demanded,” Vanessa Williams, the recording star and Broadway artist who is one of the founding members of Black Theatre United, an organization created in 2020 to advocate for artists of color, told MarketWatch.

“‘There’s never been a dearth of playwrights of color. What’s new is people are looking for them and realizing they’re right there in their backyard.’”


— Brian Moreland, producer of ‘Thoughts of a Colored Man’

One major development is the adoption of Black Theatre United’s “A New Deal for Broadway” platform. The document calls for a commitment among Broadway productions to never “assemble an all-white creative team” and to adequately discuss issues of racial sensitivity raised by shows. It also calls for each of the major theater owners to name at least one of their venues after a Black artist.

While the document looks largely to the future, Broadway audiences can already see change in terms of the current season’s offerings.

So far, at least a half-dozen works by Black artists have been presented — a far cry from the days when only one or two Black playwrights might be represented in the course of an entire year.

The offerings range from heady dramas that tackle the issue of racial inequity (Antoinette Nwandu’s “Pass Over” and Keenan Scott’s “Thoughts of a Colored Man”) to a comedy that centers on a Black family reuniting for a funeral (Douglas Lyons’ “Chicken & Biscuits”). Pulitzer Prize-winning playwright Lynn Nottage is also in the mix with “Clyde’s,” a new, lively work set in a sandwich shop.

‘This is the time for this play’

Perhaps most notable of all is the Roundabout Theatre Company’s presentation of Alice Childress’ “Trouble in Mind,” a 1955 comedy-drama that offers a behind-the-scenes peek at the theater world. The plot revolves around a show in development that itself addresses the subject of racism.

Childress’ play was slated to make it to Broadway in 1957 — she would have been the first Black female playwright to have her work presented there — but Childress insisted on a less-than-happy ending, and producers balked at the thought.

Now, the Roundabout presentation, which starred the Tony Award-winning actress LaChanze and ran through Sunday, is the talk of Broadway, with glowing reviews aplenty. The production is both fiercely funny and determinedly harsh in its depiction of a theater community whose seemingly good intentions are rivaled only by its inherent prejudices.

And though the play is nearly 70 years old, it feels very much like a work that could have been written today — which is precisely the point, said Charles Randolph-Wright, the prominent Black director behind the production.

“This is the time for this play,” he said.

Brian Moreland, producer of “Thoughts of a Colored Man,” which recently closed, said it shouldn’t come as a surprise that the works of so many Black playwrights are making their way to Broadway of late.

“There’s never been a dearth of playwrights of color,” he told MarketWatch. “What’s new is people are looking for them and realizing they’re right there in their backyard.”

Moreland, one of the industry’s leading Black producers, added that a way to ensure Broadway maintains its commitment to artists of color is to have more producers of color working in the field and serving as advocates for change. He sits on the board of governors of the Broadway League, the industry’s trade group, and pointed to a recent shift in the organization’s bylaws that will make it easier for emerging producers — many of whom are non-white — to join. Specifically, the league is opening up the board to associate members, who pay a lower fee than full members.

Charlotte St. Martin, the Broadway League’s president, said the organization’s efforts go beyond welcoming producers of color. She points to the fact the league has had a diversity committee in place since 2013 and has launched diversity initiatives involving education and careers. She also noted the league has worked with the industry’s unions to increase hiring of people of color in their ranks.

“The efforts are spreading like wildfire,” she said of Broadway’s willingness to diversify.

The work Broadway has left to do

Still, challenges remain. Most notably, Broadway’s audience remains heavily white, as the Broadway League’s own research shows. Some industry critics say part of the problem is that Broadway’s ticket prices are so high — above $120 on average in the 2018-19 season, the last full one before the pandemic. In turn, they say that discourages a broader audience from attending.

The audience issue is being addressed head-on by the producers of “Slave Play,” a searing drama about race and sex by the Black playwright Jeremy O. Harris that premiered on Broadway in the curtailed 2019-20 season and is now being revived. The “Slave Play” team has presented a number of what it calls “Black Out” events — essentially, performances for a Black audience. It has also made an effort to keep ticket prices low, with more than 10,000 seats for its current run, which goes through Jan. 23, being offered at $39.

But “Slave Play” itself has become something of a lightning rod in the question of how far Broadway will go to diversify. The show was nominated for 12 Tonys, the most for any play in the history of the prestigious theater-award platform. Yet it failed to pick up a single win, which many in the Broadway community considered a significant — and telling — snub.

Representatives for “Slave Play” declined to comment for this story.

Such issues notwithstanding, many in the Broadway community, including Black artists, feel encouraged about what has taken place in the past year or so to promote diversity. But they also say the real test will come in future seasons, especially as it relates to presenting work by playwrights of color.

Randolph-Wright notes that he doesn’t see much ahead on the calendar. At the same time, Moreland is convinced the change is for real.

“This moment was an explosion,” he said of the array of Black playwrights represented on Broadway this season. “But I don’t think it will be the last time at all.”