Thousands of hospitalised Covid patients are still struggling a year on


Tens of thousands of Britons who were hospitalised with Covid are still suffering a year on, a study has suggested.

A University of Leicester-led team of experts examined over 2,000 adults who were admitted to hospital with severe Covid during the first year of the pandemic.

Two-thirds were still battling long Covid symptoms, such as tiredness, muscle pain, poor sleep and breathlessness, one year on.

And nearly all patients still struggling with these symptoms five months later did not get any better over the next seven months.

Women were least likely to make a full recovery, as well as obese people and Covid patients who were hooked up to ventilators.

Lead author Professor Chris Brightling, an expert in respiratory medicine at the university and trial chief investigator, said: ‘Many patients had not fully recovered at five months.

‘And most of these reported little positive change in their health condition at one year.

‘When you consider that over half a million people in the UK have been admitted to hospital as a result of Covid, we are talking about a sizeable population at risk of persistent ill-health and reduced quality of life.’

The condition, defined by the NHS as persistent symptoms lasting weeks or months after testing positive for Covid, is hard to officially diagnose and critics accuse some studies of overblowing its true toll. 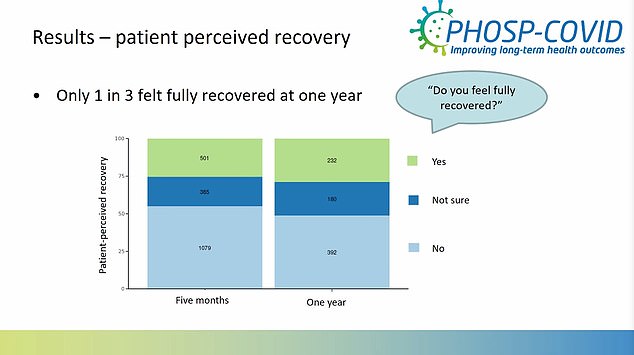 The PHOSP-COVID study recruited 2,320 adults that were hospitalised in the UK with Covid and discharged between February 2020 and March 2021 to assess how they recovered. All volunteers were examined five months after leaving hospital, while so far 924 have been examined 12 months on. The researchers, from 53 institutions anda 83 hospitals across the UK, asked patients ‘do you feel fully recovered’. Only 25.5 per cent felt fully recovered after five months and 28.9 per cent felt better after a year (shown in graph) 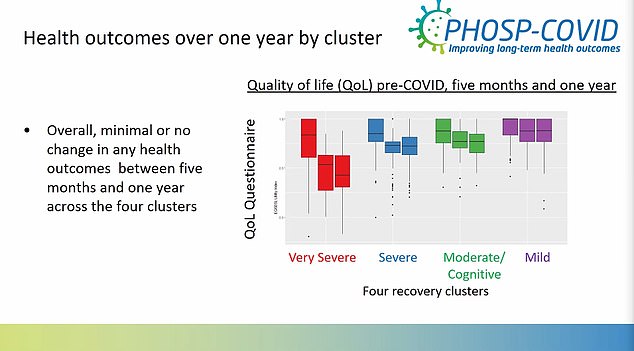 Questionnaire results showed patients felt their health-related quality of life was much worse one year after being hospitalised compared to before they caught Covid, which the researchers said suggests their physical and mental struggles are ‘unlikely to be pre-existing conditions’. The bars on the graph show how patients ranked their quality of life pre-Covid, five months after being discharged from hospital and one year later, in relation to whether their ongoing symptoms are very severe (red), severe (blue), moderate, or related to brain function (green) or mild (purple)

The new research, published on pre-print website medRxiv, offers fresh clues over the true extent of the condition.

It recruited 2,320 adults who were hospitalised in the UK with Covid and discharged between February 2020 and March 2021 to assess how they recovered.

WHAT ARE THE LONG-TERM SYMPTOMS OF COVID?

Most coronavirus patients will recover within a fortnight, suffering a fever, cough and losing their sense of smell or taste for several days.

However, evidence is beginning to show that the tell-tale symptoms of the virus can persist for weeks on end in ‘long haulers’ — the term for patients plagued by lasting complications.

Data from the Covid Symptom Study app, by King’s College London and health company Zoe, suggests one in ten people may still have symptoms after three weeks, and some may suffer for months.

For those with more severe disease, Italian researchers who tracked 143 people who had been hospitalised with the disease found almost 90 per cent still had symptoms including fatigue two months after first falling unwell.

The most common complaints were fatigue, a shortness of breath and joint pain – all of which were reported during their battle with the illness.

All volunteers were examined five months after leaving hospital, while just over a third have also been examined 12 months on.

The researchers, from 53 institutions and 83 hospitals across the UK, quizzed the patients on whether they had recovered.

Volunteers were quizzed on their physical and mental symptoms and were examined by doctors on how far they could walk. Blood samples were also taken.

The results, which have not yet been checked by other scientists, show only 25.5 per cent felt fully recovered after five months and 28.9 per cent felt better after a year.

The most commonly reported symptoms were fatigue, muscle pain, physically slowing down, poor sleep and breathlessness.

A quarter of patients said they had symptoms of anxiety and depression, and one in 10 self-reported post-traumatic stress disorder and a tenth had cognitive problems.

Questionnaire results showed patients felt their health-related quality of life was much worse one year after being hospitalised compared to before they caught Covid.

The researchers said this suggests their physical and mental struggles are ‘unlikely to be pre-existing conditions’ and instead was triggered by their infection.

As part of the study, the researchers split the long Covid patients’ symptoms into mild, moderate, severe or very severe.

Blood tests revealed those who suffered severe symptoms had higher inflammatory proteins, which are linked with whole-body inflammation, as well as molecules that are associated with tissue damage.

And those who suffered ‘brain fog’ or slowed thinking had markers in their blood linked to poor cognition, which suggest their brains could be inflamed.

Academics said this provides a potential biological explanation for the symptoms patients suffer from, suggesting their immune system is attacking its own body.

So drugs used for other inflammatory conditions — such as joint disease and autoimmunity — should be tested as treatments, they said.

Professor John Geddes, head of psychiatry at the University of Oxford, said the findings clarify the ‘intangible concept of brain fog’ which long Covid patients have complained of, but has proved hard to measure.

Dr Rachael Evans, a clinical scientist at the National Institute for Health Research, said there will be lots of mechanisms behind different long Covid symptoms.

Warm temperatures and breezy conditions continue for the beginning of the week.

Warm temperatures and breezy conditions continue for the beginning of the week.