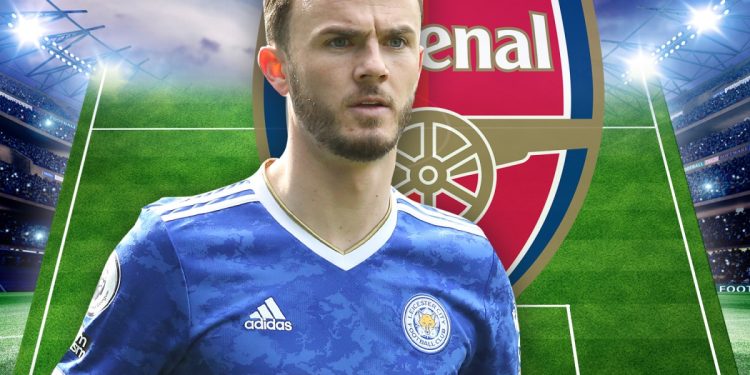 Both Arsenal and Tottenham hold an interest in Maddison, who is having a successful season in front of goal.

The Englishman has 13 goals and nine assists across all competitions this term.

Remarkably, the 25-year-old has just ONE senior England international cap to his name.

Maddison could cost either Arsenal or Tottenham £60million with the player still having two years left on his current deal.

Both North London clubs are likely to be playing European football next season, which could also play a factor on where he ends up.

Leicester can still secure Europa League football for next season if they win the Europa Conference League.

He could find himself playing alongside the likes of England internationals Bukayo Saka and Emile Smith Rowe.

His versatility could see him play in a midfield three, in behind the striker OR out wide.

Maddison could slot in behind a new striker with Odegaard to his left and Saka to his right.

Arsenal are likely to sign a striker this summer with both Alexander Lacazette and Eddie Nketiah out of contract. Alvaro Morata has been linked.

Alternatively, he could find himself in a midfield three with Thomas Partey sitting in the middle.

Partey has come on leaps and bounds this term, showcasing he is more than capable defensively.

Odegaard could play on the left side of the three.

Hale End boys Smith Rowe and Saka could start out wide for Arsenal.

In Arteta’s early days as Arsenal manager, he opted to play with a back three.

Should Arteta look to make this tactical switch, Maddison could play out wide on the left.

Tough tacklers Partey and Granit Xhaka could man the midfield.

And in defence Rob Holding could be brought in to solidify Aaron Ramsdale’s backline.