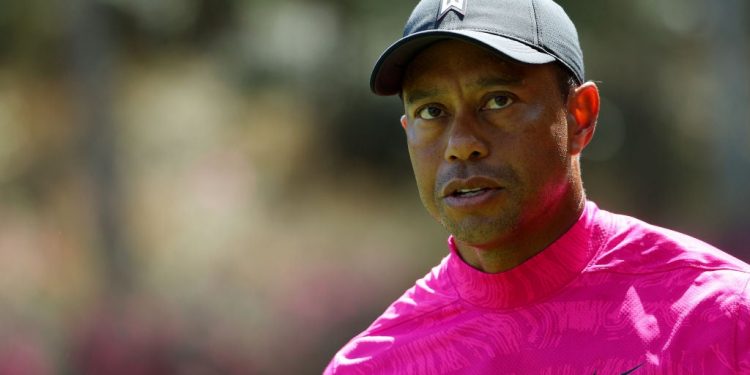 At a little after 11am on an overcast morning at Augusta, the attention of The Masters, once again, stopped for one man. As Tiger Woods emerged onto the first tee the patrons, packed behind the ropes and along the opening fairway, took in the scene and for a moment the lines of sporting drama, legend and fantasy blurred into one.

There was little evidence of what Woods had been through to reach this point, his face displaying only a picture of concentration as he addressed his ball, an absence of a limp to give away the presence of metal plates and pins fixed into his right leg. The hush told you that golf was again under his spell, its universe centring on this one corner of Georgia.

Tiger Woods was back and in that instant it paled everything else around this course into insignificance, just as it had done this week when he was announcing his sensational return, or when, 14 months ago, he sent his rental car tumbling down a ditch in a near-fatal 75 mph crash.

This was another of those moments – and the surgeries to his right leg, the three months spent in a hospital bed, the countless hours of recovery and physio, painstakingly lived when there was nothing else for him to prove, had led to it. And in a flash as he sent his opening drive down the fairway, a little further right than he would have liked, one impossible mission was over and another had just begun.

Woods does not enter golf tournaments unless he believes he can win them. Even 18 months away from competition had not changed that belief, let alone the injuries. Hitting the ball, he said, was fine. “Walking is the hard part.” Such an admission made what he would achieve on the opening day all the more remarkable.

And so Woods set off on his walk. There had been a romanticism about his comeback, but there would also be pain to endure. He is, after all, in pain “each and every day”. Asked whether there were any particular lies on the course that presented trouble – either uphill, downhill or sidehill – Woods replied, “All”. They say you have to go to Augusta to truly appreciate how undulating and fearsome the course is, in between the colour and the beauty. A flat course would have been a lot easier, Woods said, “but there’s nothing flat about this place”.

So much focus had been placed on Woods’s physical conditions that perhaps we overlooked the importance of his mental abilities, and the cumulative knowledge of the course he tamed 25 years ago and where he is a five-time champion. Why worry about where your ball might end up when you know the shots to target and the holes to respect, and while Woods wasn’t perfect, his control and measure around Augusta led to a remarkable opening round of 71, one under par.

A 10-foot putt saved par on the opening hole and from there Woods started to show why, with him, there should never simply be a suggestion of the impossible. He was denied a birdie at the 5th as a putt lipped out, only to land a stunning tee shot at the par-3 6th to within two feet. Woods was in the red. Still early in the day, you can bet it was noticed around the field.

It marked the start of a disciplined front nine, as Woods eased himself back into competition, only blighted by two moments of rustiness with errant pitches at the following hole to drop a shot. The frustration was apparent at the missed opportunity of bogeying a par-5, but reaching the turn at level par was a fine front nine with few low scores elsewhere. Amen Corner was negotiated sensibly, a wonderful approach at the par-5 13th setting up a tap-in for his second birdie of the day.

It was on those holes in which you took Woods at his word, as the leaderboard showed him nestled in the top-10, all while reminding yourself of the fact that he had played so little competitive golf before pitching up in Augusta last week. The sloppy shots, such as the bogey at 15, were understandable. The moments of magic, such as the sublime birdie at the following 16th, were there to be enjoyed and could only be greeted by shocked admiration. The 25-foot putt on the amphitheatre of a green, in which Woods has plenty of his own history, was the standout moment of what was turning out to be a special day.

“I’m proud,” Woods said afterwards, as he took in the early leaderboard to see that he was only three shots off the early pace set by Cameron Smith. But as one colossal effort was brought to a close, another begins almost immediately. Attention turns to the physio and treatment required to get the 46-year-old ready to go again tomorrow. He has another walk to come.

Games Inbox: Is Elden Ring the best game ever?