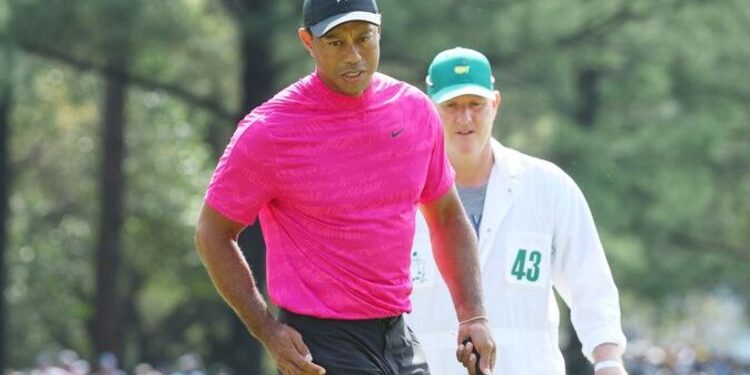 
Tiger Woods has been caught swearing live on camera after he made an error at the Masters in Augusta, Georgia on Thursday. The star returned to the big stage after his car crash in February left him needing excessive surgery.

Woods, 46, has won five Masters’ tournaments in his career, although only one of those has come after 2005. The California-born star was expected to be absent from this year’s competition after a car crash in February 2021 left him needing surgery.

Woods’ crash in Los Angeles left his SUV found upside down, where he was rushed to hospital, needing emergency surgery after sustaining multiple breaks and fractures in both of his legs. Doubts were casted over whether he would return to the sport ever again after rumours of a potential amputation were rife.

But Woods has returned in spectacular fashion, and has lined up alongside a large crowd of fans as he aims to reclaim the title he won in 2019. However, after a mistake on the ninth hole where he played his shot out of the trees and missed the green, Sky cameras picked audio up from the star saying “Oh f**k off” after his error.

“Apologies if you heard any untoward language there,” a commentator said as Woods’ comment was picked up for all to hear. The tournament, which started on Thursday, has Woods in 17th-place as he remains three strokes behind leader Joaquin Riemann.

Jon Rahm was the bookmakers’ favourite at 10/1 at the start of the tournament, with Woods in at around 50/1 to claim the green jacket with most gambling sites. It is almost defined as a miracle that he has made the tournament after the horrifying events just 14 months ago.

And fans turned up in their droves to witness a piece of history unfold, with Woods receiving the majority of the support on every hole. His sponsors Nike praised Woods for competing on his return to the sport.