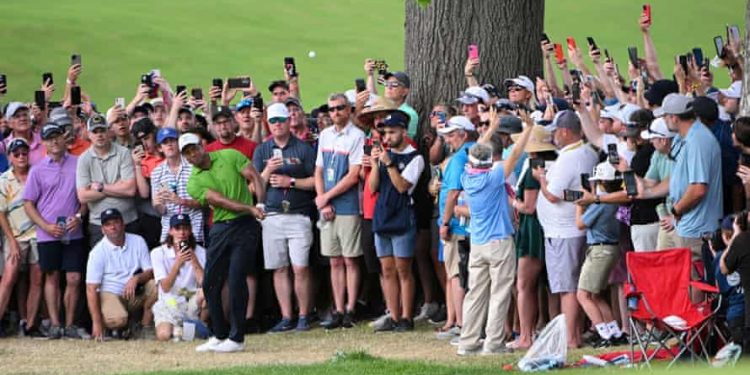 
No sooner had the final putt dropped on day three of this US PGA Championship than it was announced Tiger Woods had withdrawn after 54 holes. The 46-year-old, making just his second tournament appearance since being involved in a serious car crash last February, looked in severe physical trouble during a third round of 79.

Woods had refused to confirm he would play the final 18 holes thereafter. “Well, I’m sore,” said Woods. “I know that is for a fact. We’ll do some work and see how it goes.”

Woods was now 12 over par for the tournament, which placed him at the bottom of the field in a share of 76th. What happened next, via a brief PGA of America statement, will inevitably raise questions about the legitimacy of this comeback from serious injuries to his lower right leg. Woods had otherwise been expected to play in the US Open next month and July’s Open Championship at St Andrews.

“I just didn’t play well,” he added of round three. “I didn’t hit the ball very well and got off to not the start I needed to get off to. I thought I hit a good tee shot down the 2nd and ended up in the water. I just never really got any kind of momentum on my side.

“I couldn’t get off the bogey train. I didn’t do anything right. I didn’t hit many good shots. Consequently I ended up with a pretty high score.”

A year ago, Woods was in a wheelchair. Making the cut at both the Masters and the US PGA – many of the world’s top players managed neither – is a serious achievement.

This, however, is Tiger Woods. He lives by different standards. Woods closed at Augusta National last month with back-to-back rounds of 78. There, as here at Southern Hills, poor golf combined with poor movement at the weekend. It seemed bizarre to remember Woods spoke of competing for this US PGA on Friday evening, at which point he sat a dozen shots from the lead.

Shaun Norris, who played in Woods’s company on Saturday, offered both sympathy and strands of hope for the future. “He’s such a phenomenal player,” said Norris. “You feel so sorry for him having to go through this. But then again, you also see the type of person that he is; that he grinds through everything and pushes himself, even all the pain and that. It’s not easy to see a guy like him have to go through that and struggle like that.

“He’s swinging it nicely, and I think he’ll be back once he gets back to normal health and sorts out all the problems. The determination that the guy has, I mean, it’s phenomenal. You can see he was battling just today to get the ball out of the hole from time to time, even to bend out to put the ball on the tee; but pushing through it and getting all the focus on at the right times and on the shots is phenomenal.”