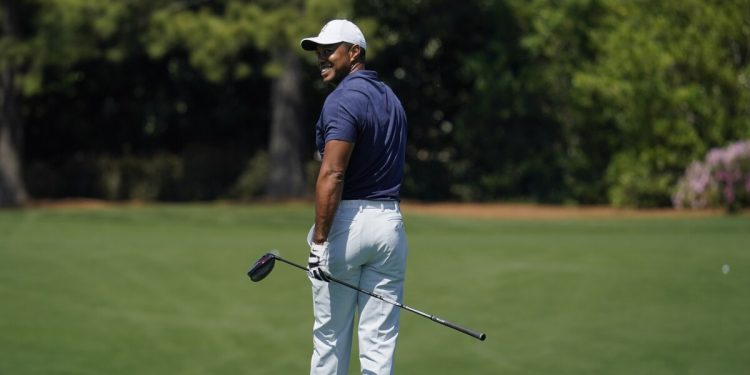 The forecast Tuesday calls for rain at Augusta National as players continue their practice rounds in preparation for Thursday’s start of the Masters.

But the skies also should be clearing on the big question of the week: Will Tiger Woods play?

Fewer than 14 months removed from a devastating rollover car accident that nearly cost him his right leg — and his life — Woods has made a stunning recovery, and Monday drew enormous crowds when he played the front nine with Fred Couples and Justin Thomas.

Woods, a five-time Masters winner, is scheduled to speak to reporters at 8 a.m. PT in his customary Tuesday pre-tournament news conference, and presumably confirm whether he intends to play this week. The expectation is he will confirm he’ll be ready to go, providing he feels good Thursday morning.

There’s also speculation that Woods might play in Wednesday’s par-three tournament with his 13-year-old son, Charlie, as his caddie. If so, Charlie undoubtedly would get his swings in as well.

Without question, Woods and his remarkable comeback are once again the buzz of this storied major championship:

About a month ago, Woods and Couples talked about playing a few days of golf in Florida. They couldn’t get together at the time. On Sunday night, Woods texted him with: “Dude, we’re playing at 3 tomorrow. See you on the tee.” Couples’ response? “You bet.”

Couples has been careful about pressing Woods about his plans to return. They’re friends, and Couples doesn’t want to be the guy who’s always asking. So even when Fred saw a picture someone took of Woods walking a round at Medalist Golf Club in Hobe Sound, Fla., he didn’t ask.

“That’s not how we work,” Couples said. “I love him as one of my best friends and I want to damn keep it that way, and I don’t pry into anything he does, but most of the texts were about his kids. Charlie got fitted for new clubs, his daughter, the speech, his daughter playing in soccer, and then all of a sudden he said, `I’m going to go to Augusta,’—- because he loves JT [Justin Thomas] and I and he wants to play these little practice rounds. That was his goal.”

“He didn’t miss many shots,” Couples said after their practice round. “He drove it great, and he’s up there putting right now. So he’s working.”

Brian Harman, who tied for 12th last year, on what Tiger brings to the Masters: “Well, he’s arguably the most influential man that’s ever existed for golf, so to have him around, and hopefully he’s healthy enough he can be competitive, I think everyone has learned not to count that guy out. He’s incredible. We’re all super stoked to have him here.”

James Piot, the Michigan State student who got into the Masters by winning the U.S. Amateur, has a memorable story about an encounter with Woods this week.

On Sunday, Piot and Aaron Jarvis, who got in with a victory at the 2022 Latin America Amateur Championship, played the front nine Sunday and had reached the turn. But before they could tee off, Woods slipped in front of them on No. 10.

“We were getting ready to go on 10 tee, and someone goes, `Hey, Tiger just teed off in front of you.’ Me and Aaron were like, `No way, holy crap.’”

The twosome played 10 as fast as they could, hoping to catch Woods on the green and ask to join him.

“I didn’t have the courage to do it,” Piot said.

Woods smiled but declined, politely telling the amateurs he preferred to play alone.

“They were still on the green, and [Jarvis] was down in the valley, didn’t see them,” Piot said. “But he went up and talked to them after the round, which was really cool. I kind of just observed from a distance. I was a little afraid. It was really cool though.”

“It was pretty cool seeing him playing in front of me,” he said. “And after the round I got to talk to him and Joe for 10 minutes or so, and it was just incredible.”

And Jarvis didn’t take the turn down to heart.

“There’s no better `No’ from — or better rejection from Tiger Woods, right?” he said.

Also Sunday, when Bryson DeChambeau was teeing off on No. 3 and Woods was walking down 17, they met eyes and each raised a hand to simulate a long-distance high-five.

“He is one that may shock a lot of people if he does tee it up this week,” DeChambeau said. “Very, very excited to have him back. Creates a lot of hype and whatnot. And, shoot, from the driving range, we could hear the loud roar when he came out of the clubhouse up to that first tee, and that was pretty special to see, or hear at least.”

When people see Augusta National in person for the first time, especially after seeing it for years on television, they’re almost always taken aback by the elevation changes. It’s a lot hillier than it looks in a Masters broadcast.

All those undulations won’t be easy for Woods.

“In an ideal world you wouldn’t want to come back at this golf course,” Lee Westwood said. “You’d want somewhere a bit flatter, maybe a little bit shorter. This is a long, hilly test of stamina now, and if you haven’t played, then it just makes it a little bit harder.

“But he’s a fit guy, Tiger, so I wouldn’t envisage any problems. I would imagine he would like, in an ideal world, if you talked to a doctor or a physio or someone who really knew what they were talking about, they wouldn’t go for a hilly test like this, but he’s probably been playing a flat course down in Florida. He’s probably walked around his home course a few times. At some point he’s got to test it out, hasn’t he?”

Canada’s Mackenzie Hughes, playing in his third Masters, had an inkling Woods would try to play in the Masters in December, when Woods played in the PNC Championship Pro-Am with his son.

“Now, I knew he was riding in a cart, and he has to walk Augusta National, but I just thought he had that in his mind probably that that would be a pretty cool way to come back,” Hughes said.

But Hughes conceded he had second thoughts last month when he attended the World Golf Hall of Fame ceremony and saw Woods, a new inductee, limp onstage.

“I thought, `This guy doesn’t look like he’s ready to play,’” Hughes said. “But he’s gotten himself ready, and we’re obviously excited to have him here.”

The rest of the world might be surprised that Woods has resurfaced fewer than 14 months after a catastrophic rollover car accident.

But not Max Homa. For him, surprised isn’t the word.

“I’d be surprised if it was anyone else that’s ever lived,” said Homa, who won the Genesis Invitational in 2021, the tournament just before Woods crashed. “So, no, I’m not surprised. I am amazed. It is a true testament to his work ethic because we all know what he does on the golf course, how hard he works, and the stories and the legend. But sitting there and doing all that [physical therapy] is — that’s got to be just boring at the very least, let alone hard.

“It reminds me of the documentary `Muse’ with Kobe Bryant after he pops his Achilles. It’s just him picking up marbles with his toes and putting it in, and he’s doing it way more than anyone else would do. That’s what I imagine Tiger is doing, just like the most reps you possibly can to get ready. It’s remarkable really.”

All this stuff isn’t for show.

“Tiger won’t play here unless he thinks he can win,” three-time major champion Padraig Harrington said. “He’s not coming to wave at the crowds. He’s coming to try and win the tournament. It looks like he’ll tee it up, and if he does, he feels like he can win, and that’s impressive.”

Webb Simpson said he was inspired to come back from a neck injury by watching Woods bounce back from his various physical infirmities over the years.

“Any time anybody asks me, ‘can Tiger contend,’ the answer is yes,” Simpson said. “Just an amazing will inside of him, whether he’s hurt or sick or struggling with his golf swing or whatever it is. So it’s really cool that he’s making this week the push to come back after that car wreck. I hope he tees it up Thursday.”