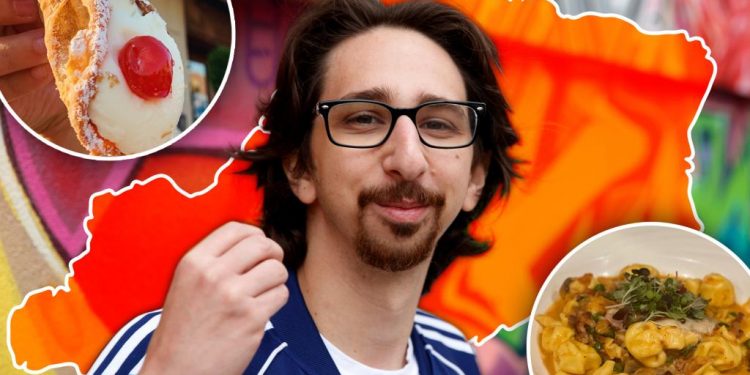 Cug is short for cugine, which means “cousin” in Italian, but is also a colloquial term used to describe an Italian-American.

Mondello’s hyperbolic alter ego, which is distinctly outer-borough, has charmed a large swath of the internet. He boasts 1.6 million TikTok followers and nearly half a million on Instagram, all tuning in for his food reviews, which feature Italian-American slang, swigs of Diet Coke, clever one-liners and raunchy sister jokes delivered in his deep voice that sounds like it’s been simmering in Sunday sauce for eight hours. (His accent, by the way, is very real.)

Mondello visits local joints, reviewing grub you can eat with your hands, like pizza and sandwiches, and concludes every video with his grandpa-esque catchphrase, “Take care, brush ya hair.” He rates the food on his “madone” scale.

And with his unassuming persona, he’s standing out among the throngs of self-styled food influencers that have become ubiquitous. Scroll through TikTok or simply walk down the street in New York City, and you’ll be visually assaulted by dudes yelling into the camera about mortadella on a roll, like Sam Kinison on a bender.

In other words, his energy is more Ray Romano, less Guy Fieri.

“I am definitely a little different. I’m a down-to-earth, chill guy, and I don’t show off. I’m wearing plain-Jane clothes, no jewelry. My look and my accent are different. My accent doesn’t match what I look like,” he said of his allure, adding that he has uses “old-school charm in a new way. Also, I’m not screaming at the camera. I think people like that. I’m not a wack job.”

Mondello wasn’t chasing internet fame. While earning an accounting degree at SUNY New Paltz, he moved off campus with two roommates in 2017, and his mother made a proposal. “My mother was like, ‘You want to go out and eat, you are going to pay for it. But if you go to the grocery store and cook, I will pay.’ What am I? An idiot?’ ”

He became the house chef, and to entertain his friends, Mondello chronicled his meal prep, showing only the food, not his face. After graduation, he landed an accounting job, but after five days, he quit.

“There was no action. No one was talking,” he said.

He became a line cook at a restaurant in New Paltz and continued creating content for a few hundred followers as a hobby. But in July of last year, while visiting Rossi and Sons Rossi Rosticceria in Poughkeepsie, he stepped in front of the lens and reviewed a roast beef sandwich, noting in the TikTok video: “You’ll get probably heart disease by 26, but it’s worth it.” The post racked up 440,000 views.

“I don’t know why I did it, but I was talking like a gavone, and people liked it. So I ran with it,” he said. His online following swelled, and in September, he ventured to the Feast of San Gennaro, where he was repeatedly stopped by excited festival goers who recognized him. That trip down Mulberry Street led to an epiphany: “I said, ‘I got something here.’ I went home and put in my two weeks at my job.”

In November, Nicolas Heller, a k a the creative behind the popular account New York Nico, started regularly featuring Mondello, which helped balloon his visibility on Instagram.

“Before that, I was small potatoes on Instagram,” quipped Mondello.

Now he’s regularly approached by fans. Online, he’s followed by celebrities including Drake, comedian Andrew Schulz and singer Charlie Puth, to name a few. Two weeks ago, he met comedian Sebastian Maniscalco at an event on Long Island. “He called me out. Said, ‘Cug, how are ya?’ “

And the single Mondello said girls regularly drop into his DMs, sometimes making sister jokes. Still, the self-described “gentleman” said, “I don’t know if I’d date a girl who slid into my DMs.”

In January, he moved back to Staten Island and is earning cash through sponsorships, merch and making videos on the site Cameo. In a month, he will be unveiling a food product, which is a collaboration with another influencer. But he is trying to stay as fresh as the mozzarella at Royal Crown bakery, his favorite sandwich spot in Staten Island.

“I can’t do this forever. In 20 years, I am not going to be eating sandwiches in front of a camera. I have to find something else to do,” he said, adding that he’s taking a discerning approach to diversifying, while stopping to smell the braciola.

“This all happened so quick, I haven’t had a chance take it all in.”

Here, Cug shouts out the purveyors of his favorite New York grub:

For pastries, Mondello favors Villabate Alba, an “old school” Bensonhurst bakery. Their cannolis are fresh, he said, adding, “I think their ricotta cheese is sick. I don’t know what the hell they f – – king do to it. I’m speechless. The presentation is also very nice.”

When it comes to pie, Cug goes with his gut and his childhood memories. “It’s a nostalgia thing for me. I like the white pie at Denino’s,” he said of the Staten Island staple. “They throw onions on it, and I like onions, so I stick with it.”

In his home borough, he builds his own sandwich at Royal Crown bakery. But in Brooklyn, he’s hitting up Anthony and Son in Williamsburg. “Their sandwiches are well built and creative . . . And it’s always lively in there.” His pick? The Godfather with prosciutto, capocollo, sopressata, salami, pepperoni, mortadella, fresh mozzarella, arugula and balsamic vinaigrette.

“I like a sesame bagel, and they put seeds on the top and bottom. It’s my neighborhood spot,” he said of Pio Hot Bagels.

“I love the money bags pasta at Patrizia’s. I have no idea what they put in the sauce, but it’s phenomenal,” he said of the stuffed pasta in a mushroom-and-prosciutto cream sauce known as fioretti alla boscaiola.

World has ‘moved on’ from Partygate ‘fluff’, minister claims