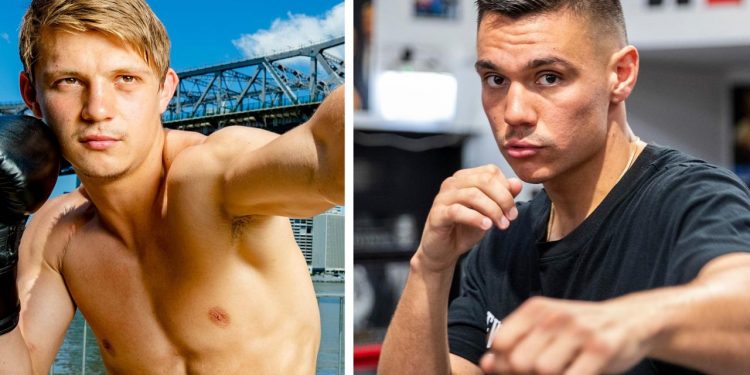 
Tim Tszyu is willing to step into the ring and fight his little brother Nikita – for a cool $100 million.

Tim, 27, is chasing a world title fight as the mandatory challenger to the WBO belt in the light middleweight division.

Nikita, 24, will end a five-year exile from boxing when he makes his professional debut against undefeated Aussie Aaron Stahl (2-0-1) next month.

The younger Tszyu was a four-time Australian champion at the amateur level before giving up the sport to complete an architecture degree.

But now the southpaw will enter the same division as his brother when he faces Stahl in Brisbane on March 2.

Tim is also hoping to fight next month and the brothers have been training together, even squaring off for an intense sparring session.

“We sparred early in camp. I landed a couple of good shots on him but he dominated by the end of it,” Nikita said at the No Limit Boxing 2022 launch in Sydney.

Tim added: “It was competitive. We hurt each other, that’s for sure.”

Charlo (18-1-1) and Castaño (19-0-2) were set for a light middleweight unification fight on March 19 but it was called off when the latter suffered a bicep injury.

Tim was willing to take Castano’s place but the Aussie looks more likely to face Terrell Gausha (25-2-1) in America on March 26.

Tim emphasised he’ll fight anyone at any time, but said it would take an astronomical figure when asked by foxsports.com.au if he’d get in the ring with his little brother.

“If you paid me $100 million then we can start talking about something like that,” Tim said.

“He’s a killer. He really does hurt people and he hurts them bad, he’s got knockout power.

Nikita claimed he would need “$50 million” to fight his brother but he doesn’t think the pair will ever face each other on a professional card.

“Yeah I’ve thought about it but I wouldn’t really want to,” he said.

“He was the older brother who was very good at a lot of skillful things. Whenever we played around in basketball, tennis, etc, he was very technically proficient, so for me to play with him I had to use all my dedication and put my heart into the game.

“He pushed me to be someone that never gave up and constantly going forward.

“Yeah it was a little bit frustrating but that frustration became a positive for me, it helped me become better.”

Nikita sees his surname – made famous by father Kostya – as an opportunity instead of a burden.

“It’s a lot of pressure that comes with it but that pressure is bringing focus into my life, it’s making me sharpen my tools and put a lot of attention to detail.”

With Russia tiptoeing on the brink of war with Ukraine, what does Vladimir Putin want?