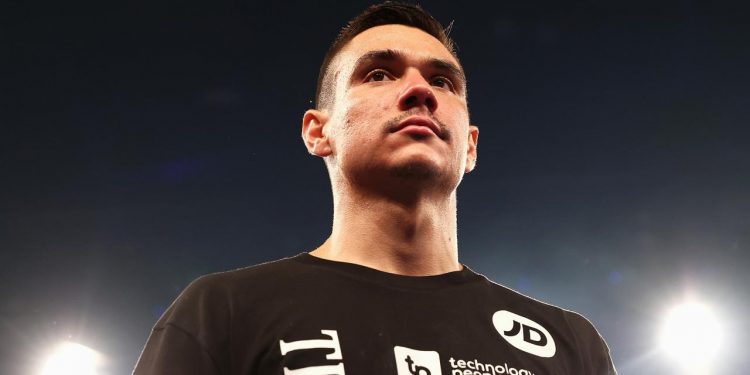 
Tim Tszyu described his U.S. debut as a new beginning, a chance to put the boxing world on notice and forge a separate identity to the one he has in Australia.

And what does he want the new Tim Tszyu to look like, the one who will have his hand raised next Sunday?

“The bad guy,” he told Morning Kombat“I just want to be the bad man that takes everyone out”.

The first challenger on that list in former U.S. Olympian Terrell Gausha, who had some interesting comments earlier in the week when giving his take on the Australian.

“What you see is what you get. He doesn’t do too many things spectacularly, but what he does do well, he does it very well, and that’s bring the pressure.

“I expect Tim to try to bring pressure and come forward. We have something ready for that and we’re going to do our thing no matter what he tries to do.”

That was far from the only warning Gausha had for Tszyu too, declaring that he is ready to give the Australian a “different look than he’s seen before”.

“Compared to most of the fights that everyone has seen, they’re going to see something new from me,” Gausha said.

Tszyu’s ominous reply to big warning ahead of ‘dangerous’ debut

Tszyu, on the other hand, has been pretty consistent in his opinion on what kind of challenge Gausha will represent in his quest for a world title shot.

“But I have to be better in every single aspect to beat him and believe I’ve got all the tools that are needed there.”

For the time being, Tszyu is simply soaking up the American dream, the chance to meet Floyd Mayweather Sr. and spar at the Mayweather Boxing Gym in Las Vegas.

“At the moment, I’m buzzing from all this stuff, being in America,” he said.

“Having my first spar here in America was incredible. It’s like a new chapter and beginning. I’m sure there is going to plenty of years ahead [here].”

Gausha though is not paying attention to the “hype” surrounding Tszyu.

“It’s got nothing to do with any hype around Tszyu. It has everything to do with where I’m at in my life and my career. Things are happening at the right time for me. I’m in a good place. This is the perfect fight for me at this point in my career.

“I appreciate him for taking this challenge. Most other fighters would try to protect their record. This shows that he believes in himself. He wants the tough fights. That being said, I think he took the wrong fight.”

Prominent boxing journalist Dan Rafael described Gausha as a “gatekeeper” for Tszyu, someone who will give him a fair indication of how far away that world title shot is.

“I don’t want to call him a stepping stone because Gausha is better than that but he is maybe a gatekeeper,” Rafael told The Showtime Boxing Podcast.

“It’s a reasonable test for Tszyu coming overseas for his debut in the United States.”

Unlike most people in the American boxing scene, Rafael knows Tszyu and his approach quite well having paid close attention to his fights in Australia.

Rafael said he has seen enough to make the big call that Tszyu has a “serious chance” to be a “serious champion” and “be around for a while” on the global boxing scene.

“I think he is tremendous,” Rafael said.

“I know a lot of people in the United States have never watched him or seen him. His exposure in America has been limited at this point. Most people haven’t seen him. I have watched Tim Tszyu quite a bit.

“I think he’s gotten a lot better as time has gone by. It’s hard to tell at some points because the competition level is not really anything spectacular.”

Should Tszyu take down Gausha on Sunday, plans are already underway for a world title shot against the unified champion after ermell Charlo and Brian Castano face off in May.