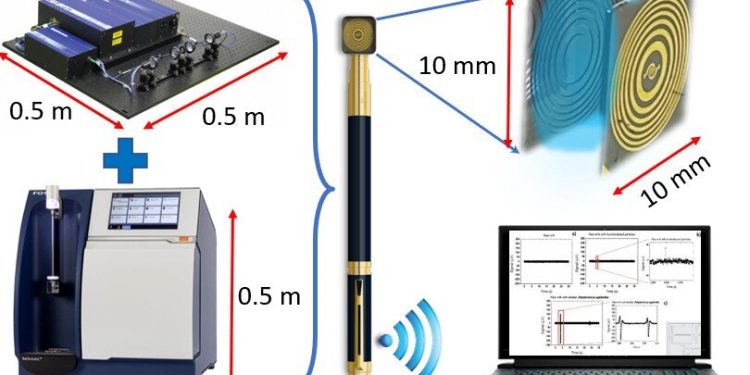 
A Skoltech professor and his colleagues from Germany have designed a very small and flat antenna for receiving and transmitting terahertz signals. THz waves are a band of electromagnetic radiation that holds much promise for applications as diverse as security checks and wireless communication, cancer screening and dentistry, and detection of food degradation and defects in manufactured devices. The problem with the technology is that THz devices will require miniaturization before they can be more widely adopted. The recent study in Scientific Reports makes an important contribution to that effort.

“Today, you will find bulky THz devices in laboratory or industrial settings, in some airports, hospitals, and telescopes,” says the study’s first author Shihab Al-Daffaie, an associate professor of the practice at Skoltech. “To enable new exciting applications, we need to get THz technologies out of the lab and into the hands and homes of ordinary people. And that means making them radically smaller.”

This is what Al-Daffaie and his colleagues are working on: bringing THz devices and systems to your fingertips.

“Almost 90 percent of THz devices use the bulky silicon lenses that are about 10 millimeters in diameter and 6 millimeters thick,” Al-Daffaie goes on. “There’s no way you can have a fingertip-sized device with that thing. So we found a way to get rid of it.”

The antenna presented in the new study is just 0.3 millimeters thick—20 times thinner than the cumbersome silicon lens plaguing earlier designs. “But this is more than a reduction in size,” Al-Daffaie explains. “We can plant our THz device directly on the flat antenna, seamlessly integrating it into the system. Previously, you would put the device over the lens, sort of like a device within a device—but now we have it on the same platform.”

Without sacrificing performance, this integration drastically reduces the amount of optical power required by the device, eliminating the need for huge lasers, and enables having the transmitting antenna very close to the receiving antenna. “You can put them both on the tip of a pencil,” Al-Daffaie continues, emphasizing that with prior technology, one would instead have two independent devices, each of them half a meter across (fig. 1).

“To get an idea of how such a pencil-sized device could be used, consider biocell, liquid, or gas analysis,” Al-Daffaie says. “You could use it to test milk quality, for example. You put a drop between the two antennas. The transmitter sends THz waves to the receiver, which picks up their modulation by the substance undergoing analysis—in this case milk—to infer its composition. But remember: THz radiation is also good for wireless communication, so the beauty of this setup is that this same antenna can also relay the analysis results to a smartphone or wherever it is you want them.”

Creating a non-radiating source of electromagnetism