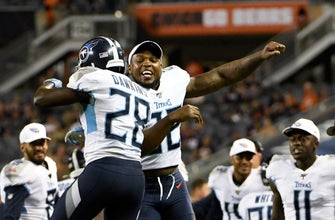 NASHVILLE, Tenn. (AP) — The Tennessee Titans did nothing during the preseason to tip their hand with new offensive coordinator Arthur Smith or how their new additions will jump-start an offense that was one of the NFL’s worst in 2018.

The Titans insist they’ll be ready come Sunday in the season opener in Cleveland.

“We’re going to unleash the weapons on Sunday,” rookie A.J. Brown said. “Everybody’s going to be here. We’re just going to do what we do. We have a whole bunch of weapons on offense and just going to have fun, make plays.”

The Titans didn’t have all their starters together for even one snap during a preseason game. Marcus Mariota, going into the final year of his rookie contract, had one touchdown pass on the only drive he ran that ended with a TD. Running back Derrick Henry didn’t play at all in the preseason recovering after hurting his left calf on the opening day of training camp.

Tennessee will be without three-time Pro Bowl left tackle Taylor Lewan for the first four games, but the Titans are as healthy as they’ve been possibly since the 2018 opener. Coach Mike Vrabel believes they’ve seen enough in practices and games to be confident in what they can do offensively.

“We have to go prove it on the field we have to go out and operate and manage a football game and score in the red zone and extend drives on third downs,” Vrabel said Thursday. “All those things we talk about every week.”

The Titans have plenty of room for improvement. They ranked 25th in total offense, averaging 312.4 yards per game and 29th passing with 185.9 yards passing last season. They ranked seventh in rushing, but Tennessee also was 27th in scoring, averaging just 19.4 points per game.

That’s why general manager Jon Robinson revamped the offensive line, signing veteran Rodger Saffold as the new left guard and veteran wide receiver Adam Humphries and drafted Brown in the second round out of Mississippi.

Three-time Pro Bowl tight end Delanie Walker also will be back after breaking his right ankle in the 2018 season opener, and he likes what the Titans added to the offense.

How the Titans plan to use Henry, Walker and a receiving group led by Corey Davis, the fifth overall pick in 2017, is expected to change week to week depending on the opponent. But the Titans are listing three receivers as starters on their depth chart for the first time since this team moved to Tennessee in 1997 in Davis, Humphries and Tajae Sharpe.

The Browns traded for receiver Taywan Taylor at the final roster deadline last weekend. Asked if Taylor had spilled all of the Titans’ offensive secrets, Kitchens joked that yes the receiver had.

“I’m just kidding, I wouldn’t tell you even if he had,” Kitchens said.

The Titans hope to benefit from both Mariota and Henry, who’s also in the final year of his rookie deal, being fully healthy together as well. Mariota said he feels healthy and ready to go, and having Henry behind him doesn’t hurt either. Henry ran for 625 yards in December to finish off last season with the best month in the NFL in all of 2018.

“When you turn around and you got big 22, it makes anybody feel good,” Mariota said. “I’m excited to see him run. I think he’s going to be another weapon for us and he’s going to do a lot of good things.”

Thousands of Yemenis rally in Aden in support of the UAE

What trade fears? Wall Street is back in rally mode

What trade fears? Wall Street is back in rally mode