When Alexander Zverev lifted the trophy on Sunday at the Pala Alpitour, it ended the Nitto ATP Finals, but it also signalled the close of ATP Director of Officiating Operations Tom Barnes’ career.

Barnes, who has been involved in the tennis officiating community for more than three decades, served as the ATP Supervisor for the final time in Turin.

“Before I came to work for the ATP, I never kept a job more than three years in my whole life,” Barnes said. “It’s been a fantastic journey. I’ve loved every bit of it.”

Barnes’ mother played tennis when he was a kid. She had an old wooden racquet from which they cut off the handle to allow Tom to hit against the garage door.

“I played a little bit as a junior,” Barnes said. “But I wasn’t very good.”

In California, juniors who lost in tournaments had to serve as umpires, so Barnes said he, “got more experience as an umpire than playing”. He served in the United States Marine Corps from 1960-64 and played tennis during his time there.

Later on, Barnes had a manufacturing company that built cabinets for hospitals and schools. When he sold the business, he worked on a couple of projects for the manager of his local club.

“The pro asked to help with a clinic. One thing led to another and the pro quit, so I became the club pro,” Barnes said. “While I was doing that, that’s when I entered a national tournament and that’s when my officiating career started.” 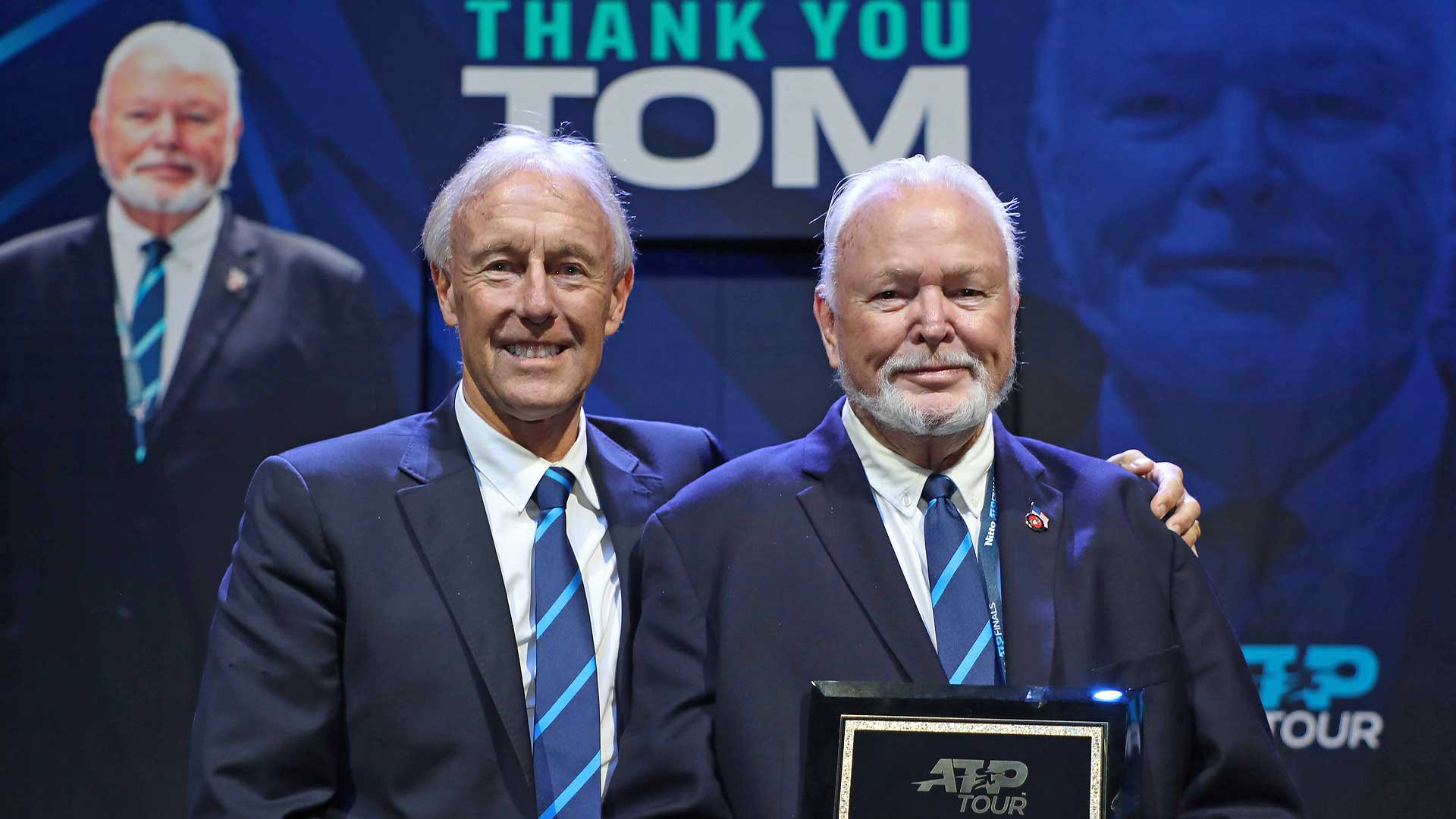 Tournament Referee Gerry Armstrong poses with ATP Supervisor Tom Barnes at the Nitto ATP Finals.
Barnes called to see when he was scheduled to play at the 30-and-over tournament. Officials told him Monday afternoon, and another tournament staffer confirmed that when he called back.

“I showed up a couple hours early to get a hit with somebody and checked in with the referee and he said, ‘Oh, Barnes! Where have you been? You were supposed to be here this morning,’” Barnes said. “They had defaulted me and put an alternate in my spot and I was out of luck.

“The referee challenged me and said, ‘If you think you’re so good go sit in that chair and call that baseline.’ So I did. It turned out I liked it and that started the whole process.”

Barnes received his international certification as a chair umpire in 1983 and would later serve as the US Open referee for two years. His first tournament as a supervisor for the ATP was an ATP Challenger Tour event in Guam in 1990.

“I get to do everything I like to do. I like to manage people, I get to do that. I like the rules structure, and so I administer the rules,” Barnes said. “I’m just very comfortable.”

Barnes will continue assisting on a contractual basis with officiating development. But he will be missed on Tour, and was enthusiastically greeted by ATP staff earlier in the week during a special ceremony at the entrance to centre court.

ATP SVP Rules and Competition Miro Bratoev said: “I’d like to thank Tom for his invaluable contributions to the ATP, officiating and the entire sport over the past several decades. His service to the tennis community has helped elevate the sport’s officiating standards and pushed all of us to constantly improve and evolve. His efforts will have a lasting effect that will carry down to officials for years to come, and I look forward to seeing him continue to mentor officials in the future.”