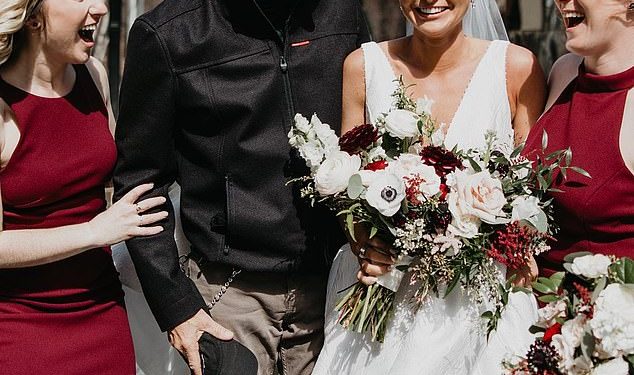 By Ashley Hume For Dailymail.Com

Tom Hanks ensured one bride-to-be would have the wedding day of a lifetime – before she even made it to the altar – by photobombing her pre-ceremony photo shoot and leaving the stunned woman in tears of joy.

An image of the movie-worthy moment, which was shared online by wedding photographer, Rachel Rowland, shows tearful bride Grace Gwaltney open-mouthed in shock as the 65-year-old Forrest Gump star posed up alongside her and two bridesmaids outside of their hotel in Pittsburgh, Pennsylvania.

According to newlywed Grace, she was making her way out of the Fairmont hotel when Tom approached her and asked if he could snap a picture – less than a year after he famously crashed the wedding of two brides on a Santa Monica beach.

But while this is not the first time the actor has photobombed a wedding shoot, Grace says she was amazed to see him popping up – and she admitted that the bridal party ‘all started screaming’ when they realized who the photo crasher was.

‘So we were all walking from the hotel to the limo, and out of nowhere, he pops up and just says, “My name is Tom Hanks! Can I take a photo with the bride?”‘ she told the Pittsburgh Post-Gazette. 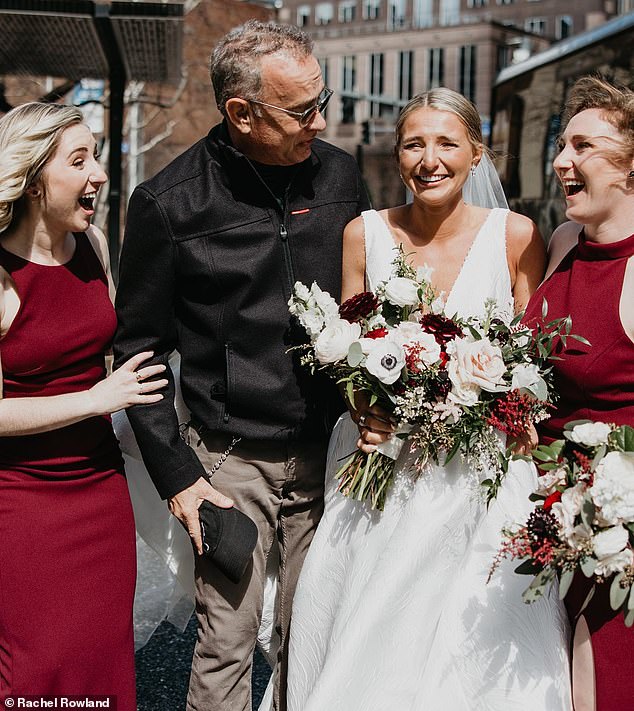 Wedding day surprise! Tom Hanks surprised a bride-to-be during a pre-wedding photo shoot when he asked to take a picture with her

Grace gushed that Tom was ‘just as wonderful and charming’ as many might think, adding that the actor’s wife, actress Rita Wilson, also got in on the photo action before the bride dashed off to tie the knot.

‘We all started screaming and were pretty much in shock… He was just as wonderful and charming as you’d assume,’ she said. ‘His wife, Rita [Wilson]was there and got in some photos, too.’

According to photographer Rachel, though Tom’s surprise pre-wedding appearance certainly made the day all the more memorable, it failed to steal the spotlight from Grace and her new husband, Luke.

‘I’d like to say a photo bomb from Tom Hanks was the best part of yesterday but honestly I’d be lying. (No offense to the GOAT),’ she wrote on Instagram while sharing the image.

‘Yesterday was filled with joy, and laughter and fun and love and family and hugs and I just can’t get enough of Grace and Luke.’

Tom has been spending time in Pittsburgh while shooting the movie Man Called Otto, however he is familiar with the city, which is where he filmed 2019 Mr. Rogers biopic A Beautiful Day in the Neighborhood. 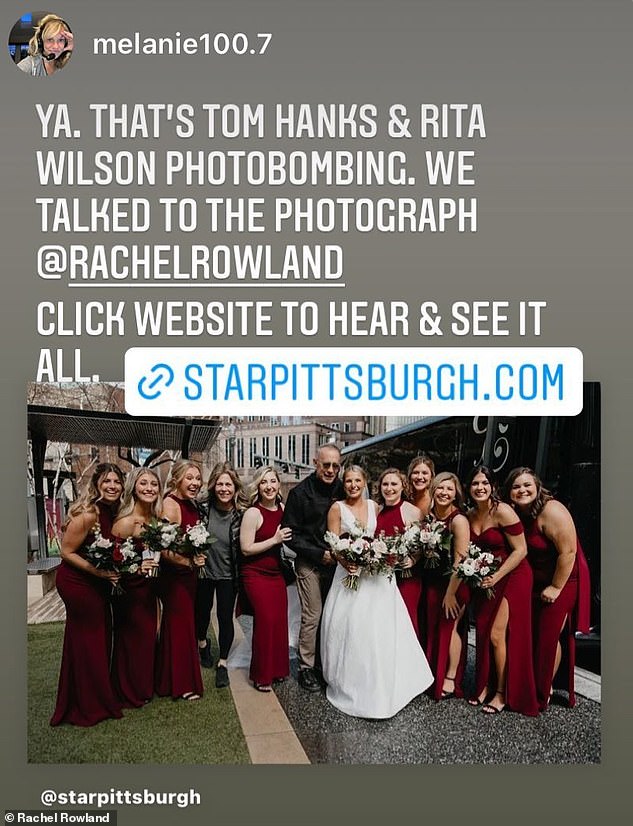 On location: The 65-year-old star has been in the city shooting Man Called Otto, which is the first time he has worked in Pittsburgh, Pennsylvania since his 2019 Mr. Rogers biopic A Beautiful Day in the Neighborhood 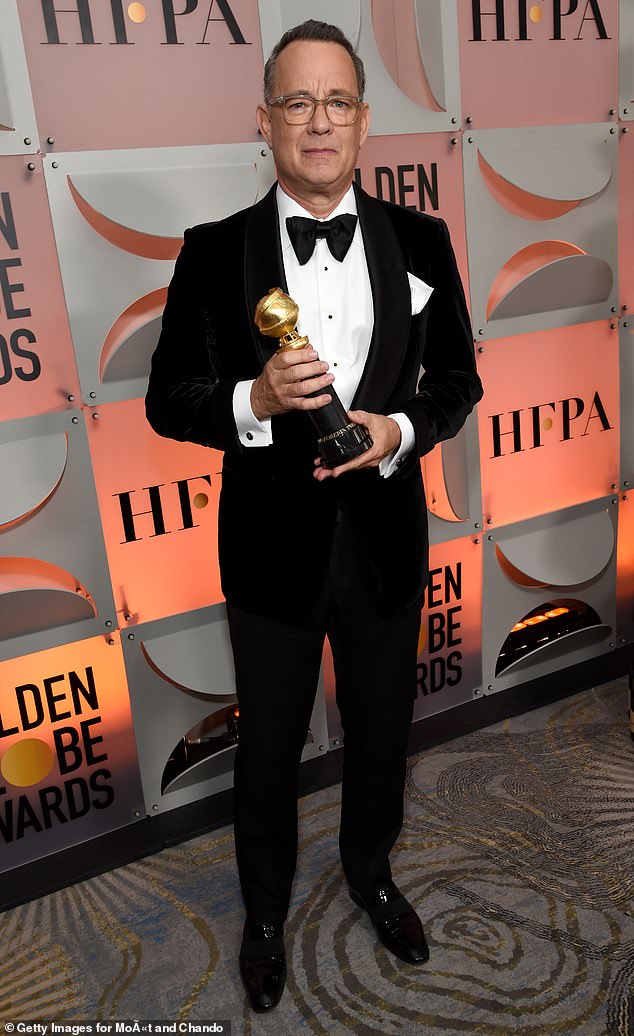 Exciting moment: The Forrest Gump actor approached Grace Gwaltney and her bridal party as they finished snapping some pictures at the Fairmont Pittsburgh hotel before heading to her nuptials over the weekend, and her photographer Rachel Rowland captured the amazing moment on camera. Seen in 2020

Last week, he also surprised a local mother when the production trucks turned up outside her house for an early morning shoot.

Mom-of-five Ashley Glass told the Post-Gazette how Hanks noticed her at the window with her two-year-old son Charles, and he wandered over to say hello.

‘I hurried up and got my phone. He came over and was talking to us. I was starstruck. I didn’t even know what to say.’ 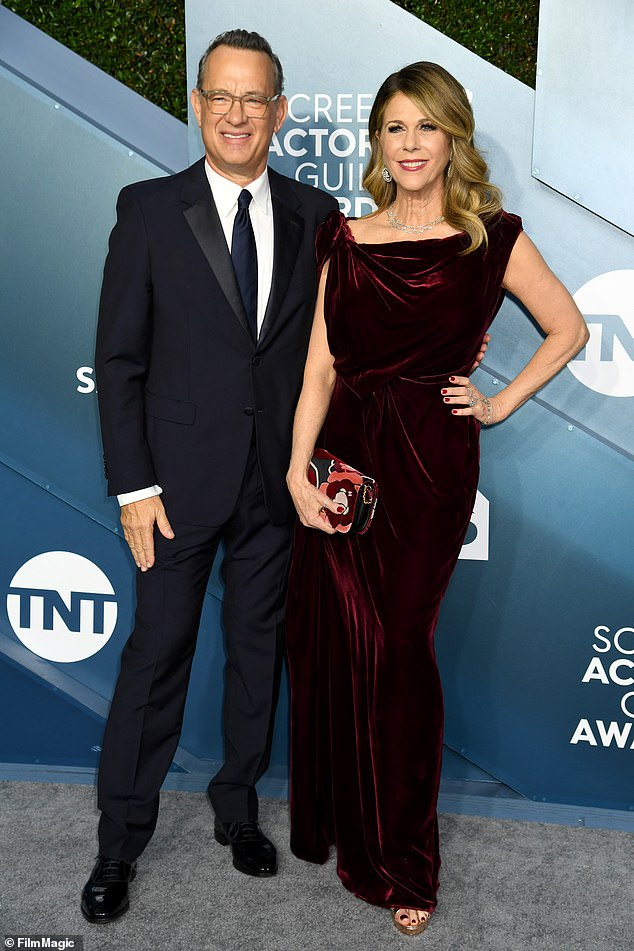 Joining in the fun: Grace said that Tom’s wife Rita Wilson was there and ‘got in some photos, too’. Seen in 2020

The Most Important Things Students Learn At School

The Most Important Things Students Learn At School