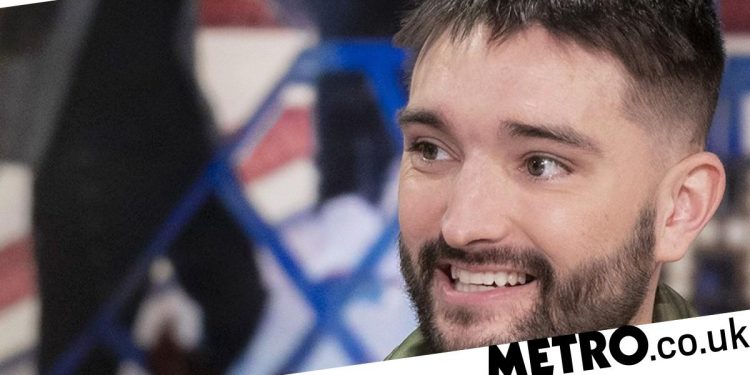 Ben Shephard and Susanna Reid have recalled welcoming the late Tom Parker onto Good Morning Britain with The Wanted months before his death, saying he was ‘full of joy and fun’.

In a statement released on Wednesday, Parker’s wife, Kelsey Parker, revealed that he died at the age of 33 two years after being diagnosed with a brain tumour.

Tributes came pouring in for the singer, with The Wanted saying in a joint statement: ‘He was our brother, words can’t express the loss and sadness we feel. Always and forever in our hearts.’

On Thursday’s GMB, Shephard and Reid spoke about spending time with Parker last year, when he came on the programme with the band.

‘I’m sure all of you have heard the news, the very, very sad news, about Tom Parker from The Wanted who sadly died from his battle from a brain tumour,’ Shephard said as the ITV programme began.

‘It was one of those moments that I think we were all desperately hoping wasn’t going to happen, the battle that he was taking on and the treatment that he was having was going to work.’

Explaining that Parker and his bandmates from The Wanted performed on GMB’s Christmas show, Shephard said that the late singer was ‘full of joy and fun’.

‘So much fun, he just kept smiling through,’ Reid added.

After showing a clip of Parker speaking about his brain cancer diagnosis on GMB, Reid described it as ‘remarkable’ that the segment was filmed less than four months ago.

Shephard replied: ‘You could see he was so full of energy and fun and I think that the band getting back together was very much centred around his illness and his diagnosis.

‘And they were still making plans for what was going to happen and they were on tour, and where they were going to go, and they were excited and he was excited to be there. And it was so lovely to have him with them and them all together.’

Reid emphasised how The Wanted demonstrated ‘how much they cared for Parker behind the scenes’, as it was apparent that they ‘really had that arm around him all the time’.

‘We send our love to the band, the team around them and especially Kelsey and the children,’ she stated.

Parker was diagnosed with an incurable brain tumour in 2020.

Parker spoke openly about his brain cancer diagnosis in a documentary and on social media, telling his fans that it had been brought ‘under control’ in November 2021.

He is survived by his wife Kelsey and their two children, daughter Aurelia, two, and son Bodhi, one.

Good Morning Britain airs weekdays from 6am on ITV.

From Struggling Renter to Cash Flowing Landlord Using $0 Down Loans