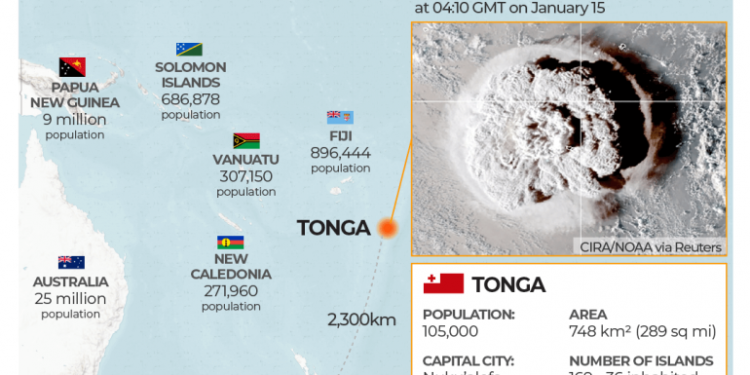 
There are some 1,350 potentially active volcanoes around the world, many located around the Pacific ‘Ring of Fire’.

The South Pacific nation of Tonga is still cut off from the world two days after an underwater volcano erupted –  triggering tsunami alerts across the Pacific.

So far, there have been no reports of deaths or injuries but a full assessment is not yet possible with communication lines down.

On January 15, the Hunga Tonga–Hunga Haʻapai volcano, about 70km (45 miles) northwest of the nation’s capital, Nuku’alofa, sent plumes of smoke 20km (12 miles) into the air and caused significant damage.

Before and after satellite images show smoke rising from the underwater volcano days before it erupted.

While the volcano has erupted regularly over the past few years, there has been nothing like this most recent eruption. Early data suggests it was the biggest eruption since Mount Pinatubo in the Philippines more than 30 years ago.

Robin George Andrews, a science journalist, volcanologist and author of Super Volcanoes, told Al Jazeera from London that “it was the most energetic [volcanic] explosions in the entire 21st century”. 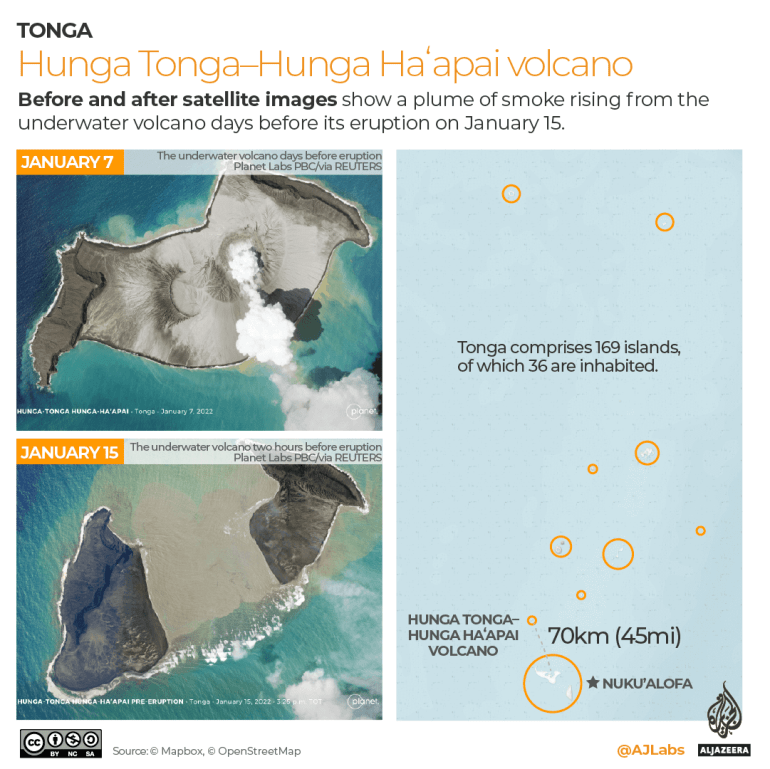 Where are the world’s volcanoes?

There are some 1,350 potentially active volcanoes around the world, according to the US Geological Survey.

Many are located along a 40,000km (25,000-mile) arc along the Pacific known as the “Ring of Fire”, which is also where about 90 percent of all earthquakes occur.

Tonga is home to several volcanoes, all along the Ring of Fire. 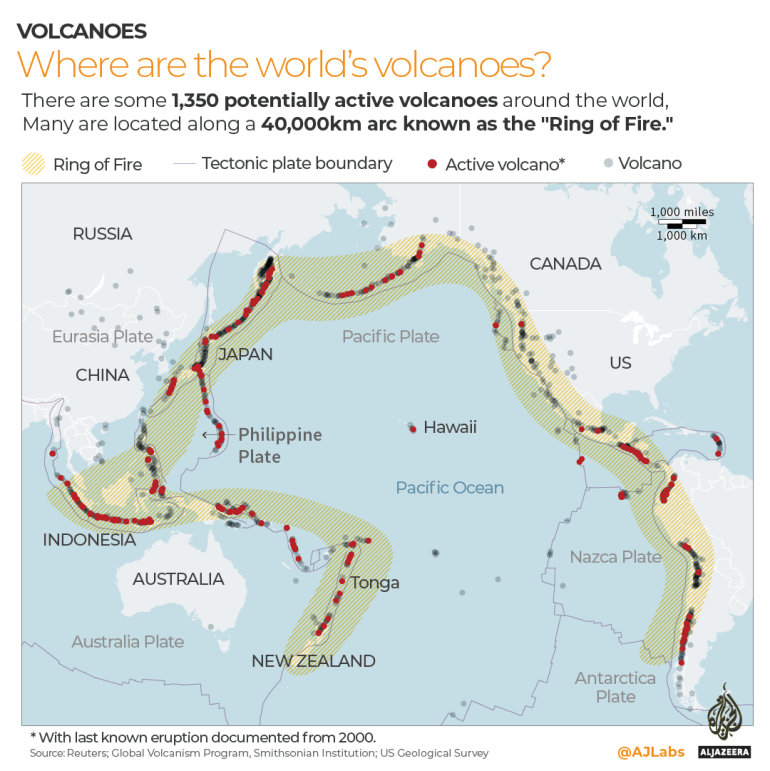 There are about one million undersea volcanoes – and most are extinct. According to the Global Foundation for Ocean Exploration group, about “three-quarters of all volcanic activity on Earth actually occurs underwater”.

During an eruption, hot magma forces the oceanic crust open. This can lead to tsunamis – a series of ocean waves caused by the displacement of water. 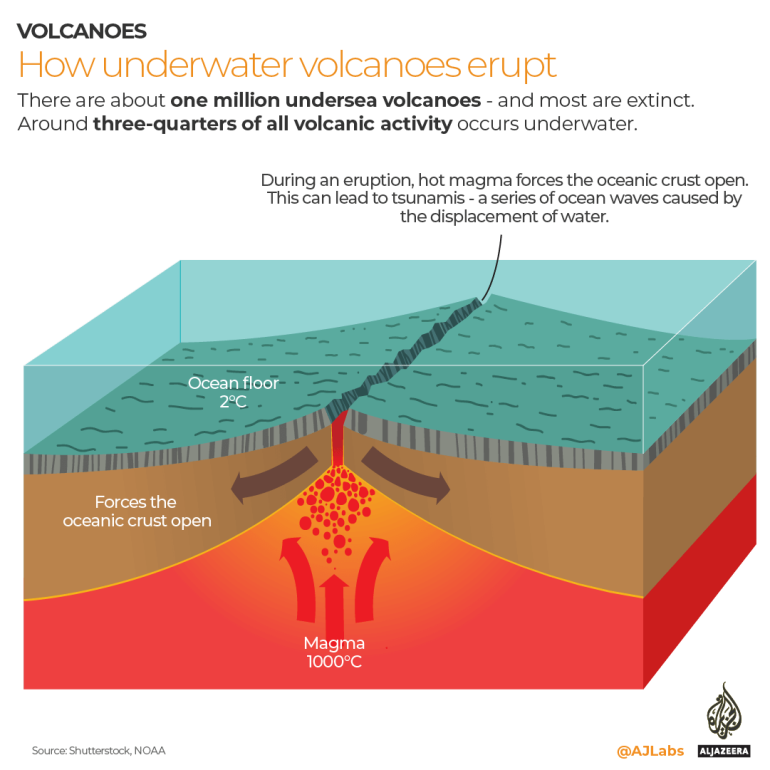 A 1.2-metre (4 foot) wave swept ashore in the Tongan capital, with locals reporting fleeing to higher ground, leaving behind flooded houses, some with structural damage, as rubble and ash fell from the sky.

Tsunami warnings were issued across the Pacific, including in Samoa, Australia, Japan, Hawaii, Chile and the US Pacific coast.

Waves damaged boats as far away as New Zealand and Santa Cruz, California – more 8,500km (5,300 miles) away – but did not appear to cause any widespread damage.

By Sunday, the warnings had receded. 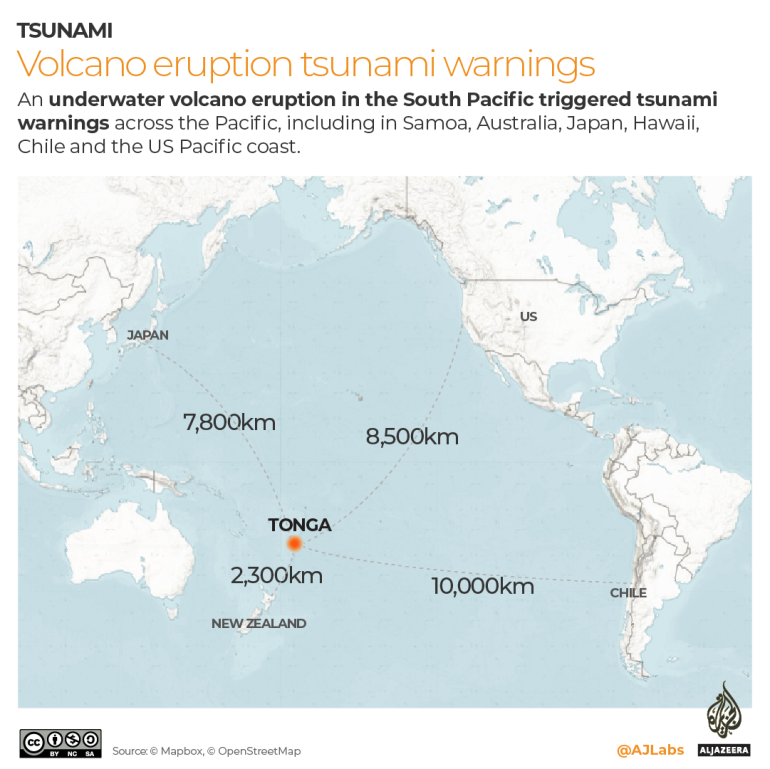