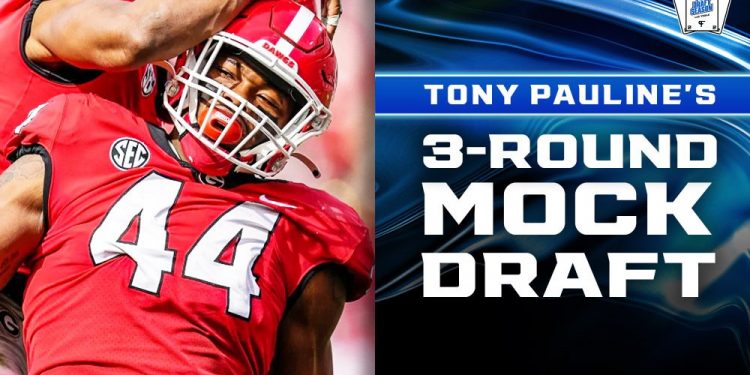 Barely 24 hours before the 2022 NFL Draft officially kicks off, here’s my annual 3-Round 2022 NFL Mock Draft. With so much uncertainty, the early picks will set the tone. Unlike previous years, I projected two trades this time around — both of which I heard are real possibilities.

How could the first round of the 2022 NFL Draft shake out in Las Vegas? Let’s begin with the Jacksonville Jaguars, who take the defensive end who isn’t from Michigan.

Back on March 25, we were the first to break the story the Jaguars were considering selecting Travon Walker with the first pick of the draft. That story now becomes reality as Trent Baalke gets his man.

If Aidan Hutchinson is taken with the first pick, Travon Walker would be the pick here.

Another interesting battle. People believe this pick could be Travon Walker if he falls to the Texans, but I continue to hear Lovie Smith is lobbying for Derek Stingley Jr.

Ahmad Gardner makes the most sense in this spot. Jermaine Johnson has to get consideration as well. But the word is the Jets are enamored with Ikem Ekwonu.

The Giants want a plug-and-play right tackle, and Evan Neal can be just that.

I reported this would be the selection more than a month ago. The big question is, does Charles Cross make it down this far?

Kayvon Thibodeaux will also get serious consideration at this spot, but Ahmad Gardner may very well be the pick.

The Falcons are in a position where they can select the best player available, and Kayvon Thibodeaux fills the role as well as a big hole on Atlanta’s depth chart.

The ninth pick is going to be in play. New Orleans has inquired about moving up for this selection, but ultimately, the Eagles get the pick with all their draft capital. Philly gives away one of their first-rounders in 2023 for the right to select Alabama’s Jameson Williams.

Jets will consider Jameson Williams at this spot, and many in the league continue to tell me they will ultimately move this pick for Deebo Samuel. However, if a trade does not form, Garrett Wilson could be their choice.

If Washington does not choose Kyle Hamilton at this spot, he could fall a long way.

Trent McDuffie is the player the Vikings want, though they may try to trade down and still select him.

Trevor Penning will be a consideration, but Jermaine Johnson II makes too much sense after making it past the Jets.

The Ravens have a need on the interior defensive line, and no one in this draft comes close to Jordan Davis.

Seattle could take Trevor Penning at No. 9 if they don’t trade down.

The Saints need a receiver, and Chris Olave is possibly the most underrated one in this year’s draft.

Drake London won’t have to go far to play his pro ball. Zion Johnson or another interior offensive lineman will get consideration at this spot, as will Jordan Davis if he’s available.

Devin Lloyd is the three-down linebacker the Eagles desperately need.

The Saints would like to trade up, but with no left tackle still on the board, they select their future quarterback in Kenny Pickett.

The bigger surprise at this point would be the Steelers passing on Malik Willis if he is available.

Zion Johnson is a versatile hometown blocker who can start at guard and develop into a center.

Not many teams have a first-round grade on Treylon Burks, but the Packers seem to love him. They could take Kenyon Green at this spot and then go with Alec Pierce in Round 2.

Pass rusher is a possibility here, and Logan Hall could be the surprise pick. Yet, the Cardinals may opt to bolster the offensive line with Kenyon Green.

Boye Mafe would be a consideration, but George Karlaftis is a better fit for Dan Quinn’s system.

Bills could go in a lot of directions here. Tyler Smith could be the surprise pick at No. 25, but Kyler Gordon is also an option.

They could take Jahan Dotson at this spot, but Tyler Smith fills a need on the offensive line and can play guard or right tackle.

With Todd Bowles now head coach, the Bucs turn to the secondary and select Daxton Hill, a player they feel can line up at corner or safety.

I first reported on Saturday that the Seahawks would trade back into the end of Round 1 for a quarterback, and that belief has since reverberated louder through the league. To move up 10 spots and select Desmond Ridder, Seattle surrenders the 41st selection and a fourth-rounder.

Jahan Dotson is a polished pass catcher who brings speed to the Chiefs’ receiver room. Kansas City could spring a surprise and select Jalen Pitre, whom they view as their future Honey Badger.

The Chiefs have a need, and I’ve documented Brett Veach’s affection for Boye Mafe.

Tyler Linderbaum will get consideration at this spot, but Kaiir Elam immediately upgrades the cornerback position.

Detroit could take a quarterback at this spot to lock in the fifth-year option. Nevertheless, if they don’t, Lewis Cine could be their guy.