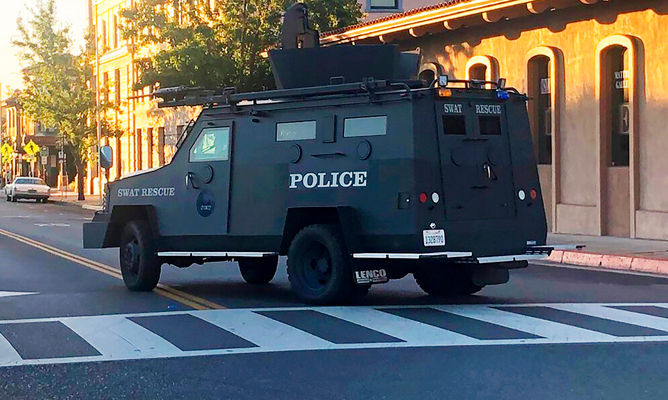 ALAMEDA — Some see it as something better suited for a war zone, others as a tool that law enforcement can use when facing a potentially lethal stand-off.

The Alameda police have just one armored vehicle, last used in the city in 2019, but they want to keep it — and on Tuesday a divided City Council agreed the department should.

It was an about-face from a decision that the council made last year.

“As mayor of this city I take very seriously the safety of the residents and the people who come to visit,” Mayor Marilyn Ezzy Ashcraft said. “You hope you never need to use it, but you hope you have it when you need to use it.”

The council’s 3-2 vote comes as cities across the country are reviewing policing methods amid questions as to how law enforcement interacts with people of color, plus whether police have become too militarized.

But the Antioch council agreed to let the department keep using the equipment it already has, including a light tactical vehicle originally produced to help troops survive explosives set off in Iraq and Afghanistan.

The Alameda council’s decision regarding the armored vehicle comes as city officials are considering approving some sweeping changes for its police department, such as having mental health workers go out on some 911 calls, plus establishing a citizens advisory board to regularly review police policies and procedures.

At the same time, the council also removed officers from school campuses.

Alameda police Capt. Jeffrey Emmitt said he requested City Manager Eric Levitt to ask the council to reconsider getting rid of the vehicle.

“I felt I owed it to the employees of APD to present the other side (or the advantages of keeping the vehicle),” Emmitt told the council.

The vehicle, acquired in 2013, can carry up to 10 first responders, and its exterior can absorb bullets.

“It is not used for peaceful protests. Period,” interim Alameda Police Chief Randy Fenn said. “It’s not an offensive weapon.”

Critics noted Alameda police have mostly sent the vehicle to nearby cities to assist officers with other agencies, questioning whether its continued ownership was justified for local taxpayers.

Last year, the vehicle was sent to Oakland twice and San Leandro once. In each case, police were serving search warrants.

“It’s only been used three times in eight years in Alameda,” resident Zac Bowling told the council. “It seems like the other cities are making far more use of it than we are.”

“It’s not necessary, despite the scare tactics supporters like to put in place,” said Alexia Arocha, another resident who weighed in.

But retired Alameda Police Chief Burny Matthews compared having the vehicle to someone having insurance for their property and the protection it provides, even though it might be rarely used.

“It is simply a tool to be used in violent confrontations to maximize officer safety,” Matthews said.

If Alameda did not have the vehicle and was faced with needing one during a crisis, the department would likely reach out to Oakland for help, Fenn said. In the best of circumstances, a vehicle could arrive in 20 minutes, he said. But that would hinge on issues such as traffic and whether Oakland had one available and the officers to bring it.

“It sends a message to have this vehicle deployed in any neighborhood,” Vella said, referring to the appearance it can create of a heavy-handed approach to law enforcement.

Along with deciding to keep the vehicle, the council wants police to adopt a policy similar to Berkeley’s regarding its use, and to look into repainting it from its current dark green so it appears less militaristic. Berkeley’s rules say its emergency response vehicle shall not be deployed during non-violent demonstrations, including for crowd control and crowd management.

“New information shows that our ownership of the vehicle is benefitting other communities at our cost and none of the 23 uses over seven years were for the dramatic outlier situations of active shooters identified for the need,” Councilman John Knox White said via an email before the meeting. “Selling this vehicle can generate funds for anti-theft campaigns that will have direct positive crime reduction impacts in Alameda.”

Police said the vehicle is not equipped with a weapon-mounted system and is designed to protect first responders when they might face danger.

Supporters say the vehicle could help protect officers responding to a mass shooting, such as what happened recently when a gunman opened fire at a grocery store in Boulder, Colorado, killing 10 people, including a police officer.

“It can happen in Alameda, too,” Councilman Tony Daysog said.

Greensill affair: David Cameron accepts ‘lessons to be learnt’ as he breaks silence over lobbying scandal

Why your electronic devices don’t last very long? Scientists have a good explanation