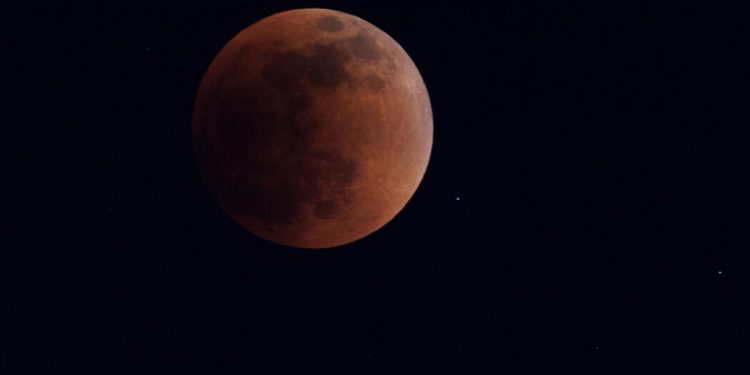 Finally a good reason to stay up on Sunday night: A total lunar eclipse.

Lunar watchers throughout the United States can experience some heavenly wonder as Earth’s shadow covers the moon during prime viewing hours the night of May 15. Those on the East Coast can watch our natural satellite start to turn an eerie copper-red color at around 11:30 p.m. Eastern time during one of the longest lunar eclipses in recent memory.

“For pretty much all of North America, this is a tremendous viewing opportunity,” said Madhulika Guhathakurta, an astrophysicist at NASA’s Goddard Spaceflight Center in Greenbelt, Md.

Where and when can I watch the lunar eclipse?

The eclipse will be visible for a large portion of the world, including those in the Americas, much of Europe and Africa, and parts of the Pacific. Joseph Rao, an associate astronomer at the Hayden Planetarium in New York, estimates that some 2.7 billion people should be able to catch at least part of the eclipse.

Not long after sunset, the left-hand side of the moon should start appearing dusky. But the main event kicks off about 10:28 p.m. Eastern time, when the moon enters Earth’s central shadow, known as the umbra. At that time, it will begin to look like something has taken a bite out of the moon.

When the moon is about three-quarters of the way into the umbra, it should start lighting up with a reddish hue, “like your electric range just when the coils begin to glow,” Mr. Rao said.

At 11:29 p.m., the moon will be in the deepest portion of the Earth’s shadow and the total eclipse will begin in earnest. The eclipse will peak shortly after midnight, at roughly 12:12 a.m., and remain that copper color until after 1 a.m. The moon will leave the umbra at 1:56 a.m., regaining its pearlescent hue as the work week begins.

Viewers farther west won’t have to strain to stay up quite as late, with the most stunning views of the red moon beginning about 8:29 p.m. Pacific time, the peak occurring just before 9:12 p.m., and the total eclipse ending by 9:54 p.m. Observers in Hawaii will be able to see the moon rise looking like a reddish ball, Mr. Rao said, while those in Europe and Africa will view the opposite effect, watching the moon drop below the horizon during the total eclipse.

The quirks of celestial mechanics mean that totality — when the moon is blood red and in the deepest shadow — lasts longer than average, roughly 1 hour and 25 minutes, giving skywatchers ample opportunity to savor the event. This makes it the longest total lunar eclipse visible for much of the United States since August 1989, Mr. Rao said.

For people in New York, weather forecasters put the chance of rain at 30 percent for Sunday night and suggested that conditions could be mostly cloudy ahead of the eclipse’s totality.

If you’re clouded out by poor weather, or not in the path of the eclipse, or NASA will be livestreaming the event on its website. You can also watch it in the video player embedded above. The Slooh online telescope will be hosting another livestream as well.

What do I need to watch the eclipse?

No fancy equipment is needed to view the otherworldly spectacle. If the weather is clear, just look up and locate the moon at night. Darker skies are better for catching the subtleties of the moon’s color change, but even those in cities will have fine views of the eclipse.

“Because it is happening at such a comfortable time, I would suggest trying to observe it from the beginning to the end,” Dr. Guhathakurta said.

Binoculars or a backyard telescope will help bring out the red color, she added. Viewers with access to such instruments should be able to watch Earth’s shadow pass over craters, valleys and mountains on the moon, and see such features take on that scarlet hue.

NASA’s Goddard center hosts maps and visualizations of both the moon during the eclipse and where on Earth the eclipse will be observable, so Dr. Guhathakurta suggested that those interested can acquaint themselves with details of the event beforehand and learn more about lunar topography.

How does a lunar eclipse work again?

Lunar eclipses occur when our planet comes between its two major heavenly companions, the sun and moon. Moonglow is actually reflected sunlight and so the lunar surface gradually darkens as the moon falls into Earth’s long shadow.

“When the moon goes into the shadow of the Earth, it should blackout and disappear,” Mr. Rao said. “Instead, it changes this eerie copper or reddish color.”

That’s because the Earth’s atmosphere is lensing sunlight around the edges of our planet. Everything other than the longest and reddest wavelengths are filtered out and the combined glow of all the world’s sunrises and sunsets gets projected on the otherwise gray moon.

If you were standing on the moon, you’d see the big black backlit plate of the Earth coming in front of the sun, Mr. Rao said. During totality, our planet would appear as a giant dark circle rimmed by a brilliant red ring, and the lunar surface around you would turn various shades of red, orange and brown.

NASA’s Surveyor III probe captured such a marvel on film during the April 24, 1967 lunar eclipse, but the resulting images are in black and white and extremely low resolution. But with many new missions headed to lunar orbit and the moon’s surface in the coming years, perhaps one of Earth’s robotic explorers will capture such a scene in color and high resolution.

When is the next lunar eclipse?

A second total lunar eclipse will occur later this year in the early morning of Nov. 8. Sign up for the Times Space and Astronomy Calendar to get a reminder on your personal digital calendar of this and other events.

It will be visible in Asia, Australia and the Pacific Ocean, as well as parts of Europe, North America and much of South America. That eclipse will be for early risers on the East Coast, who will have to get up at 4:09 a.m. to catch its beginning.