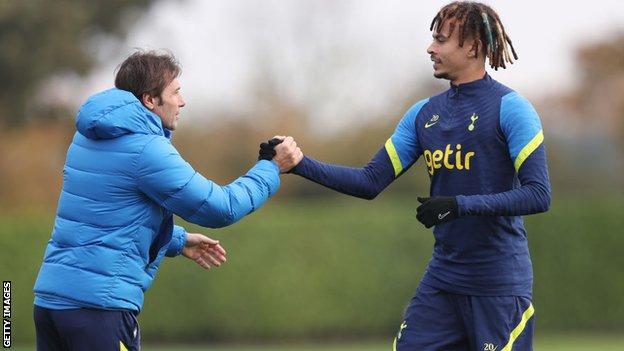 
Tottenham manager Antonio Conte believes his squad was “weakened” in the January transfer window despite the club signing two players.

“What happened in January was not easy,” Conte told Sky Sport Italia.

He added: “We lost four players – four important players for Tottenham – and we brought in only two.

“So even just in terms of numbers, rather than reinforce the squad, we, on paper, may have weakened it.”

Conte took charge of Tottenham on 2 November and oversaw a nine-game unbeaten run in the Premier League.

However, their form has faltered in recent weeks and three consecutive league defeats have seen Spurs drop to eighth, seven points off the Champions League spots – albeit with three games in hand on fourth-placed Manchester United.

Conte does not believe he was backed with ready-made signings in January and says he now realises the club’s vision is to develop players.

The Italian added: “Bentancur and Kulusevski are ideal prospects for Tottenham, because Tottenham are seeking young players they can develop and grow, not players who are ready. That is the issue.

“This is the vision and the philosophy of the club. It is inevitable that, if you want to grow quicker and if you want to be competitive more rapidly, you need players with a lot of experience, because they also raise the experience level of the overall team.

“But I repeat, I have realised now that this is the vision of the club.”

Tottenham have been unfortunate in that when they put Antonio Conte up for a round of interviews they were not expecting to lose three Premier League games in a row, a run that has totally changed the dynamic of their season.

Some figures at Spurs will feel Conte’s comments in an interview with Sky Sport Italia have been taken out of context.

Others will wonder why he has made another stinging criticism of their actions during the transfer window just 17 days after it closed. At the beginning of February, Conte called it a “strange” transfer window when four players left.

The Italian will sit down with the media on Friday and will explain more then.

Conte has never been afraid to speak his mind. The worry for Tottenham fans will be whether it’s the start of the manager distancing himself from problems he can see on the horizon.