Toulouse for under £100 a night: How to explore France’s ‘Pink City’ on a shoestring budget 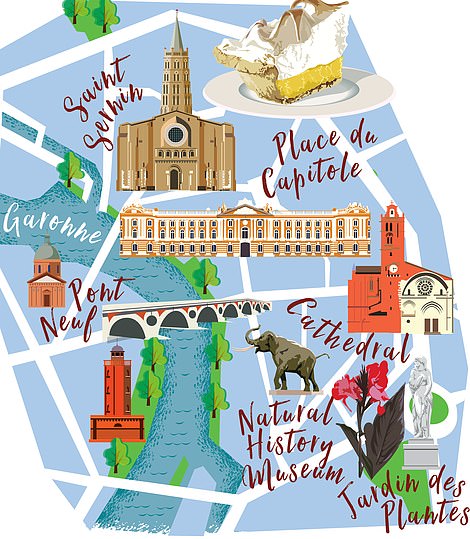 Toulouse is France’s fourth-largest city, and, luckily for visitors on a weekend break, it’s easily walkable

France’s fourth-largest city is the hub of Europe’s space and air industries — home to Airbus’s operating HQ and where the first Concorde prototype took to the skies.

But as well as its industrial attributes, this south-western city has a quiet, unassuming appeal.

Head for the colourful tables and chairs of Au Bon Graillou where myriad food and drink posters adorn the walls.

Enjoy a three-course meal (£14) such as fish soup, fillet of beef with fries and lemon meringue, with well-priced wine. Open lunchtimes. 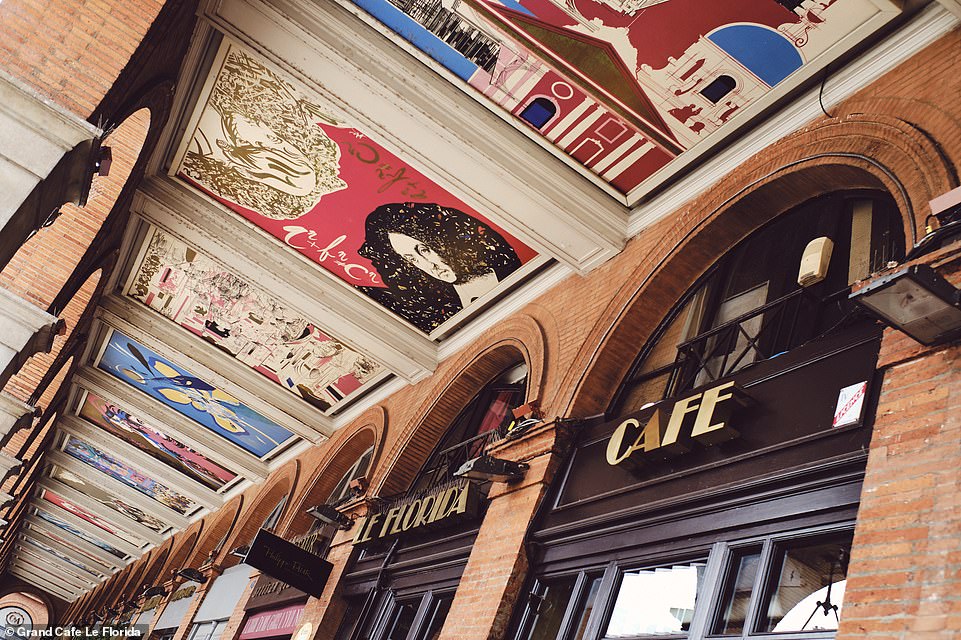 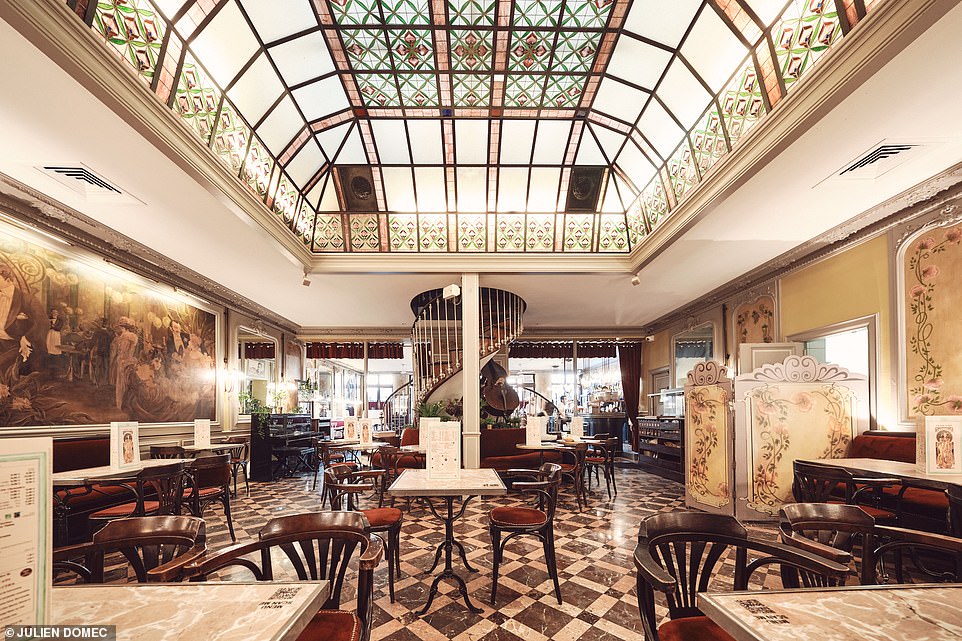 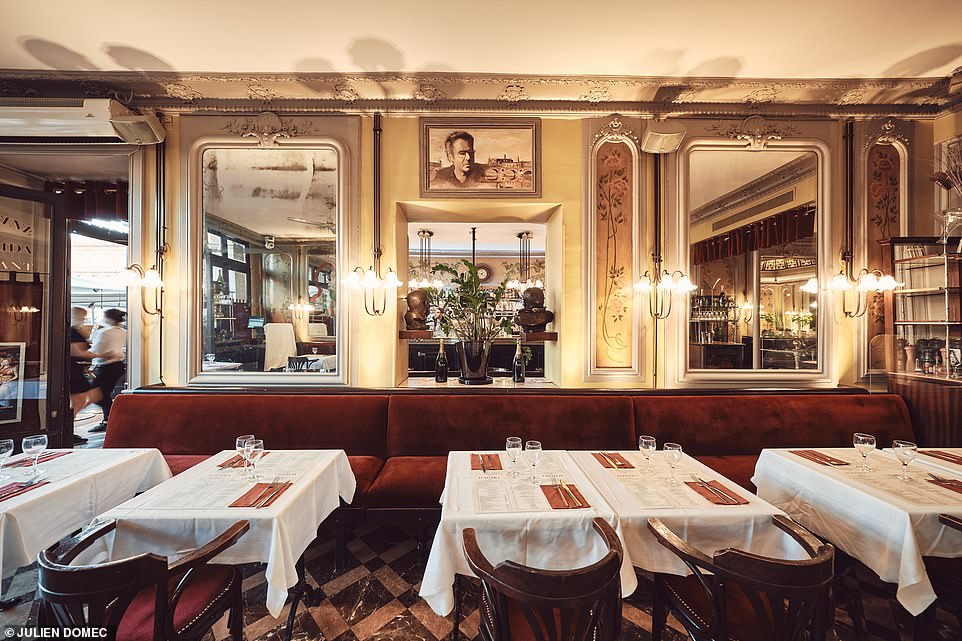 Try one of the chocolatey desserts at Grand Cafe Le Florida such as Le Royal, a divine chocolate mousse

This central cafe at 12 Place du Capitole opened in 1874 and is ideal for combining people-watching with a tasty snack (leflorida-capitole.fr).

The original owner was a chocolatier so it seems appropriate to try one of the chocolatey desserts such as Le Royal, a divine chocolate mousse (£6.25). The decor is elaborate with intricate murals. 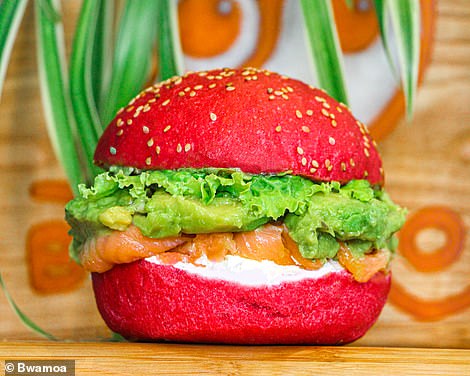 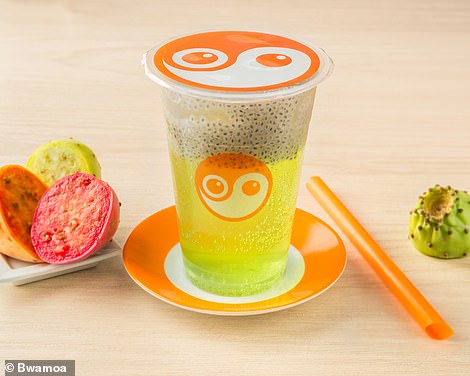 Pop in to Bwamoa, a tiny brightly-painted café at 41 Rue des Tourneurs – which is owned by a trained nutritionist – and choose between a pink, green or yellow bap. On the right is the cafe’s bubble tea 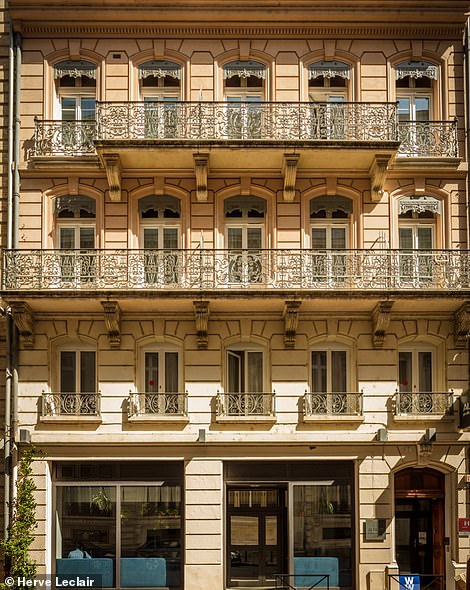 Albert Premier Hotel, pictured, is a stroll from Place du Capitole, plus the city’s chief attractions

Pop in to this tiny brightly-painted café at 41 Rue des Tourneurs and choose between a pink, green or yellow bap packed with smoked salmon or various veggie fillings (£8 with a drink, bwamoa.fr).

Just around the corner from the Esquirol Metro station, the owner is a trained nutritionist.

Dishes here are packed with fresh, organic ingredients while the interior’s green walls and wicker lampshades exude a certain charm at this restaurant at 28 Rue Bayard (sixta-toulouse.fr).

Try green curry with tofu followed by lemon tart (£14) if it’s still on the regularly-changed menu.

Fancy a siesta after your meal? Upstairs, the owner has installed six pods or, as he calls them, nap cocoons (from £5.50 for 25 minutes). 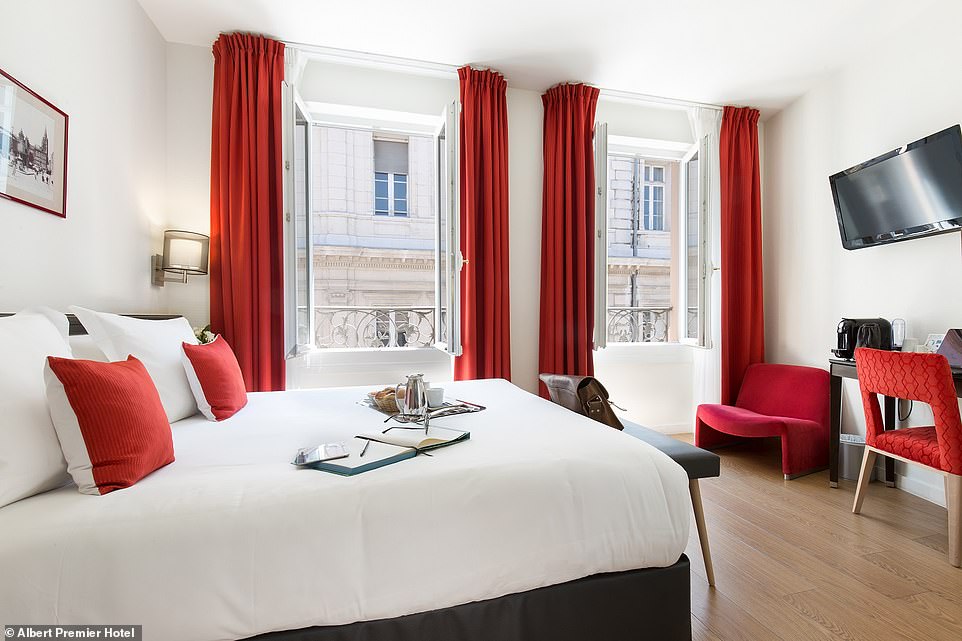 One of the 47 comfy and clean air-conditioned rooms at Albert Premier Hotel, which are priced from £70 a night with breakfast

This three-star hotel is a stroll from Place du Capitole, the main square, plus the city’s chief attractions.

Spread over four floors, it has 47 comfy and clean air-conditioned rooms in muted tones, some with oak-ceiling beams (hotel-albert1.com).

Double rooms with breakfast are priced from £70. The hotel’s friendly staff have great tips on where to go and what to see. 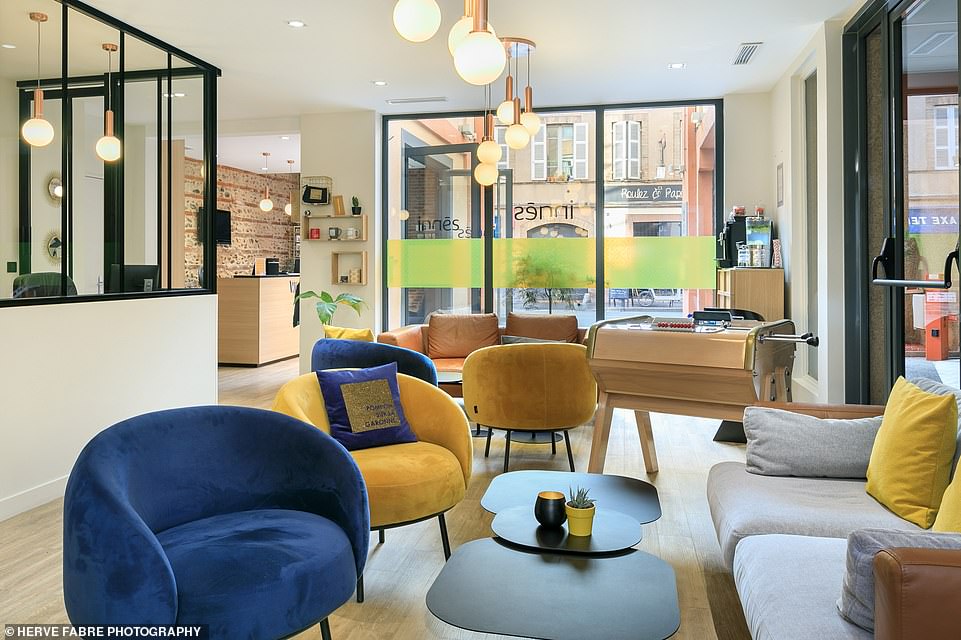 The interior of Hotel Innes, pictured above, has been dressed by British retailer Habitat 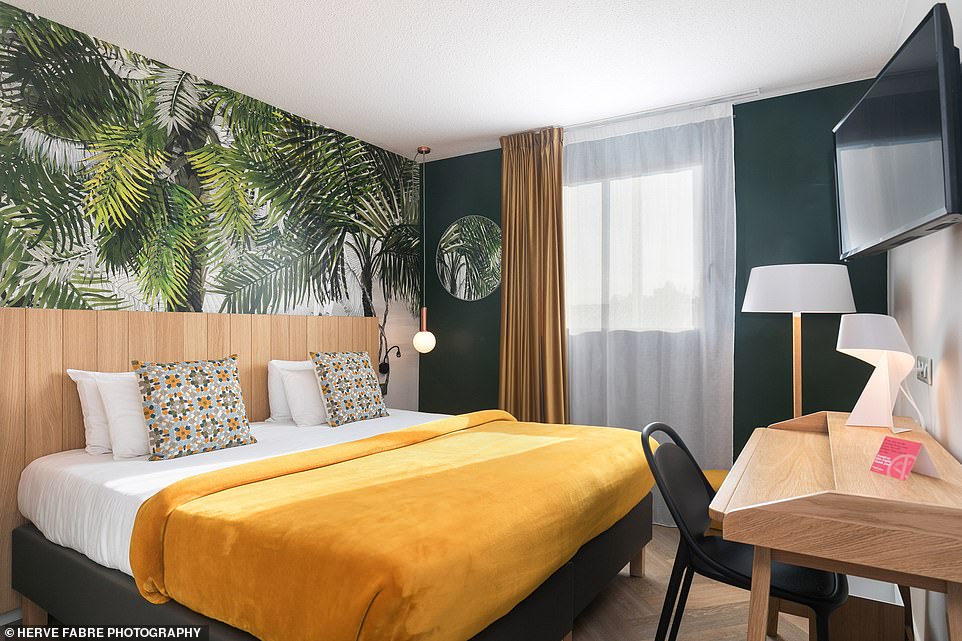 Double bedrooms at Hotel Innes, priced from £61, are sleek with palm tree-patterned wallpaper

If you’re a Habitat fan, you’ll love this 43-room boutique hotel, as the interior has been dressed by the retailer (hotel-innes.com).

Just minutes from the city’s main square, relax with a free coffee/tea in the lobby. Double bedrooms, priced from £61, are sleek with palm tree-patterned wallpaper. Breakfast is £12 pp extra. 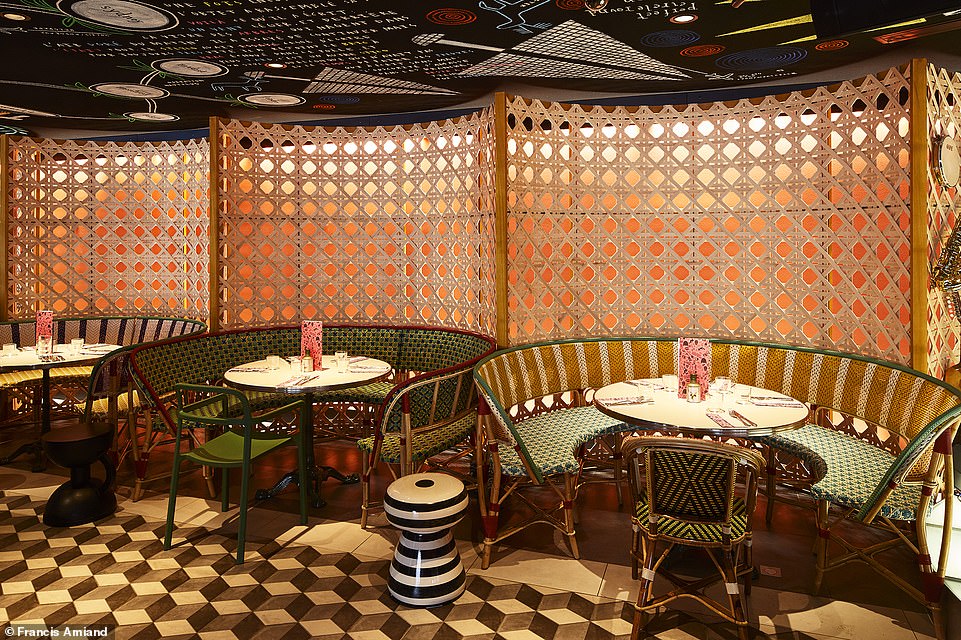 Close to the main Metro station, Mama Shelter – housed in a former theatre – is a zany hotel, restaurant and bar 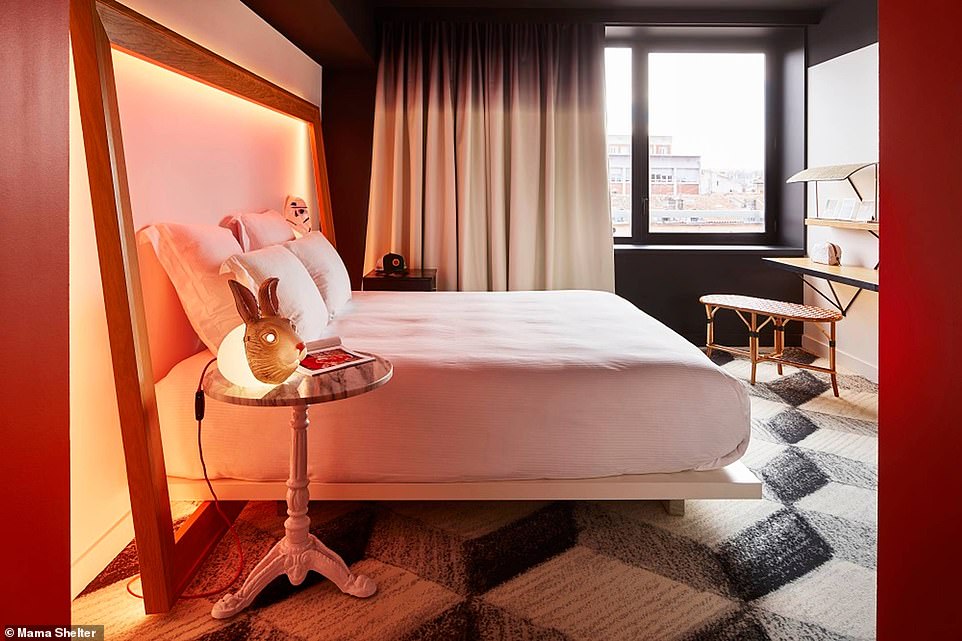 Striking: Mama Shelter has 120 quirky bedrooms, one of which is pictured, with animal-themed lampshades 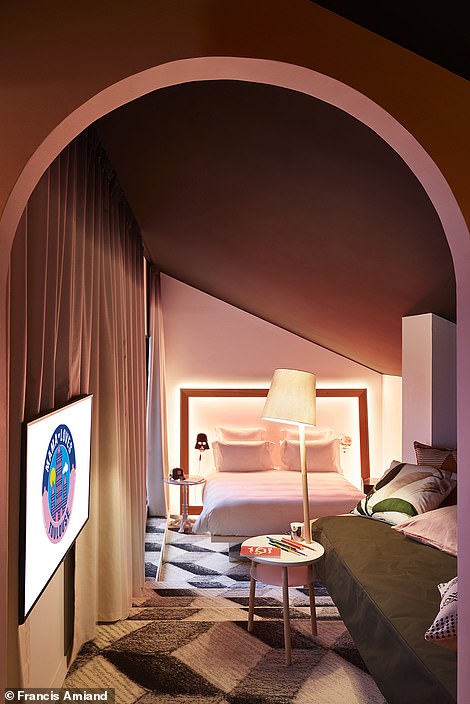 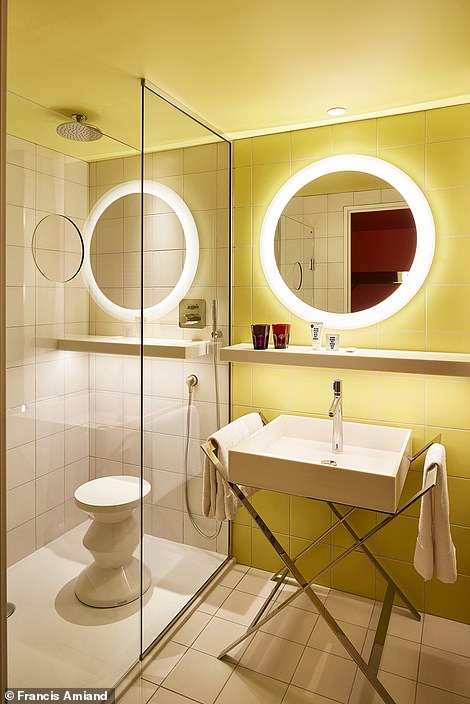 A bedroom (left) at Mama Shelter with black/white carpets and one of the adjoining bathrooms (right). B&B double rooms are priced from £93. During your stay, expect striking modern art and vintage films shown at the bar

Close to the main Metro station, this former theatre is now a zany hotel, restaurant and bar (mamashelter.com) with B&B double rooms from £93.

Guests can play basketball on the court or boules beneath an olive tree, before relaxing at the rooftop bar. There are 120 quirky bedrooms with black/white carpets and animal-themed lampshades. 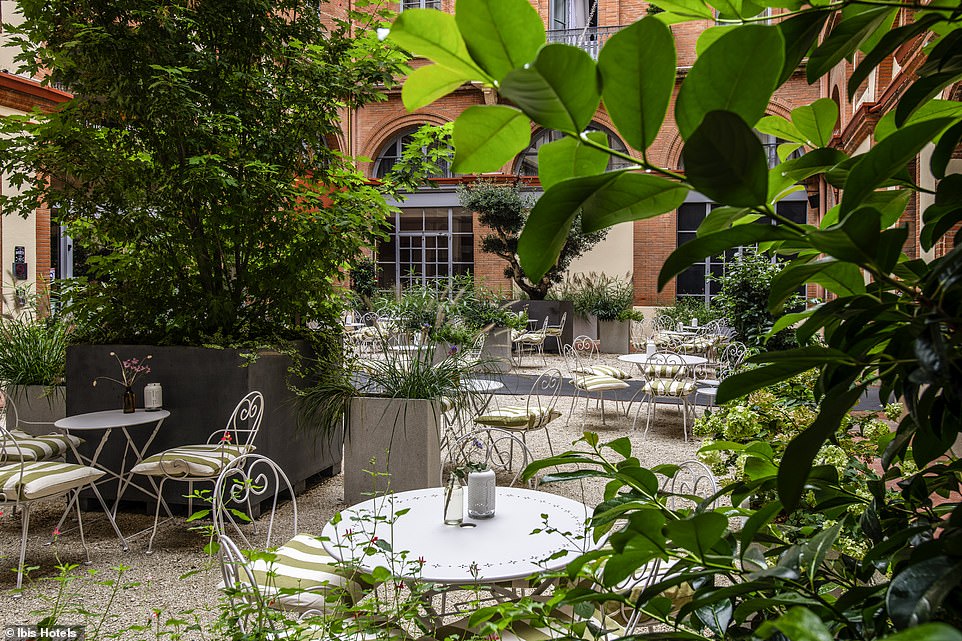 Ibis Styles Hotel Centre Capitole, pictured, is a 70-bedroom hotel that stands next to the opera house 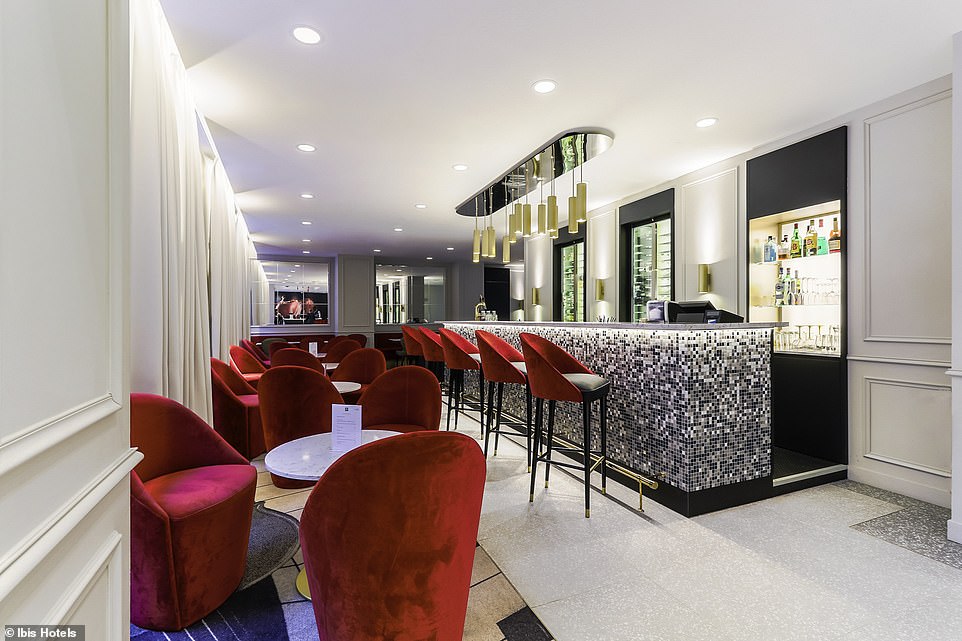 B&B doubles at the Ibis Styles Hotel Centre Capitole are priced from £92, but you can pay an extra £20 extra to upgrade to one of nine bigger rooms overlooking Place du Capitole 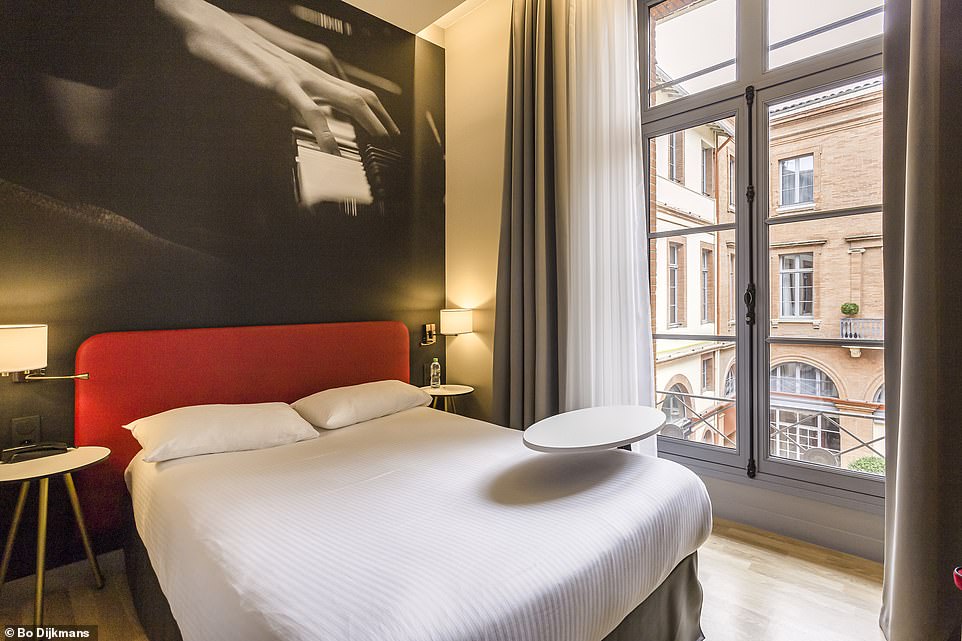 A 70-bedroom hotel standing next to the opera house, hence the musical touches including violins and other instruments hanging from the lobby ceiling, plus its carpet has a piano key motif (ibis.accor.com).

There are also music and ballet-themed murals on bedroom walls. B&B doubles are priced from £92, but if your budget permits, pay the £20 extra and upgrade to one of nine bigger rooms overlooking Place du Capitole.

What to see and do 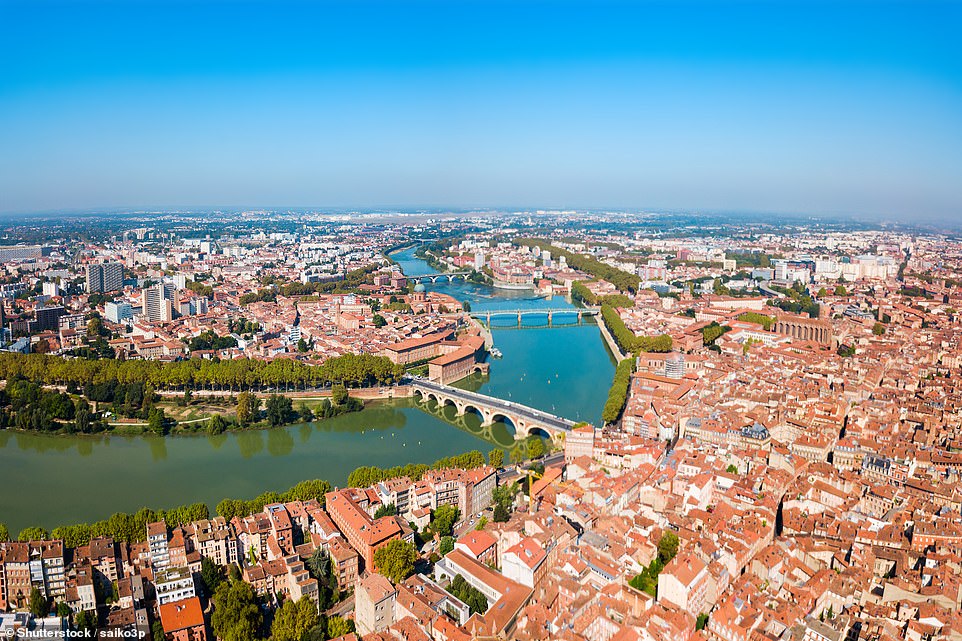 Grab a street map from your hotel or the tourist office and roam the streets of Toulouse and the banks of the Garbonne River, pictured 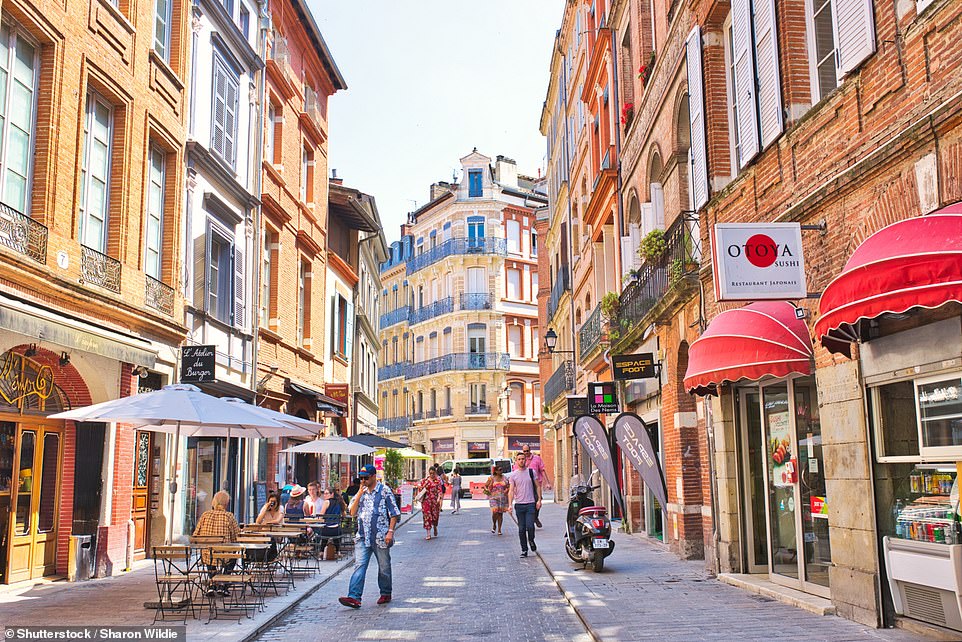 Toulouse is nicknamed La Ville Rose (the Pink City), thanks to the buildings’ terracotta-coloured bricks 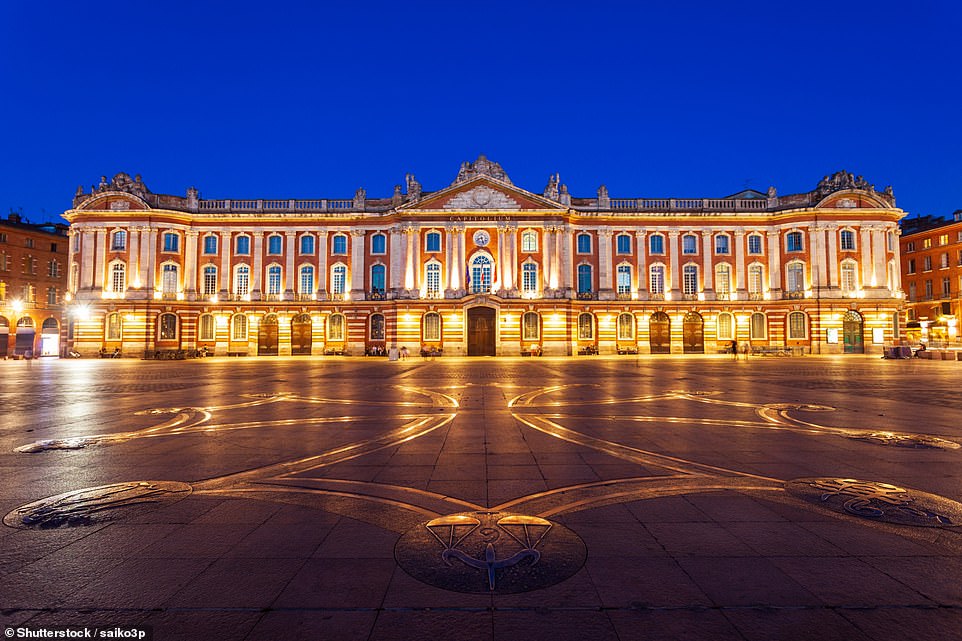 Above is the 12th-century City Hall at the Place du Capitole, where you can feast your eyes on ten huge canvasses by Henri Martin, the impressionist

Grab a street map from your hotel or the tourist office. Spend time at the Place du Capitole with cafés, bars and the 12th-century City Hall.

Pop in (free, closed on Saturdays) and feast your eyes on ten huge canvasses by Henri Martin, the impressionist. 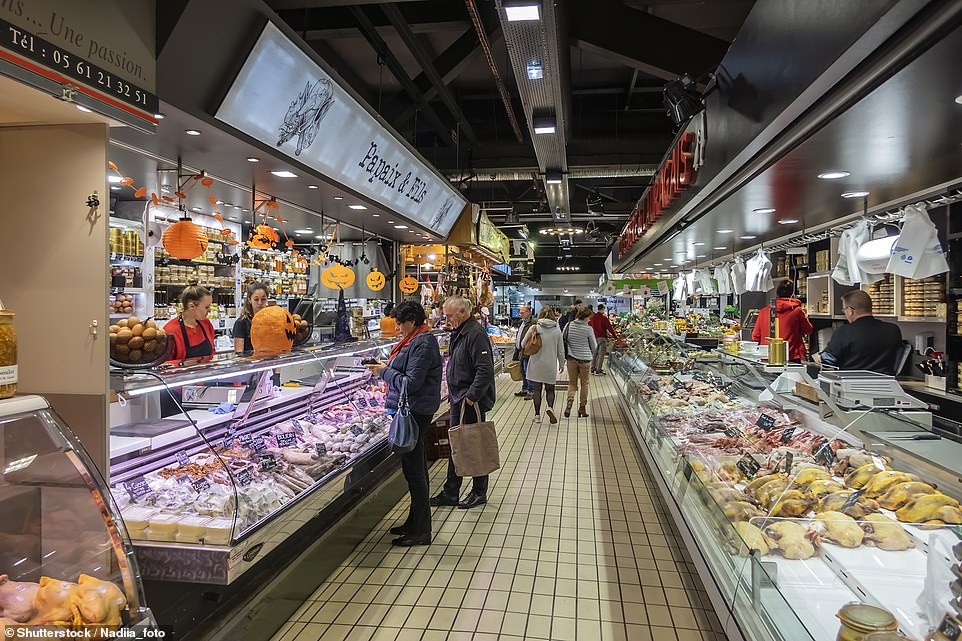 Make time to amble through the Victor Hugo Covered Market (pictured), which has been running since 1896

Wander around the Victor Hugo Covered Market, the city’s biggest and open since 1896. If you’re peckish, there are plenty of takeaway stalls. Open daily except Monday.

Buy a snack and head for Jardin des Plantes, on Allee Frederic Mistral. Next to the Natural History Museum, it’s the city’s biggest park. Open since 1794, its original purpose was to provide medicinal plants for residents and medical students. Now it’s a relaxing haven frequented by locals and tourists alike. 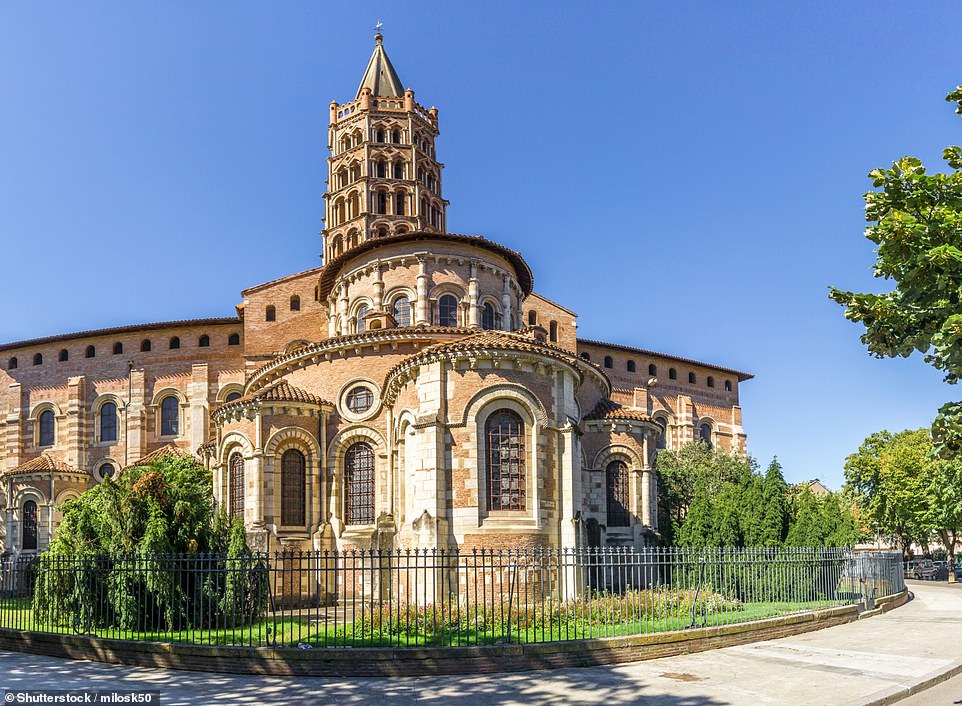 Walkable: Stop by the UNESCO World Heritage-listed Basilica of Saint-Sernin, above, with its octagonal bell-tower 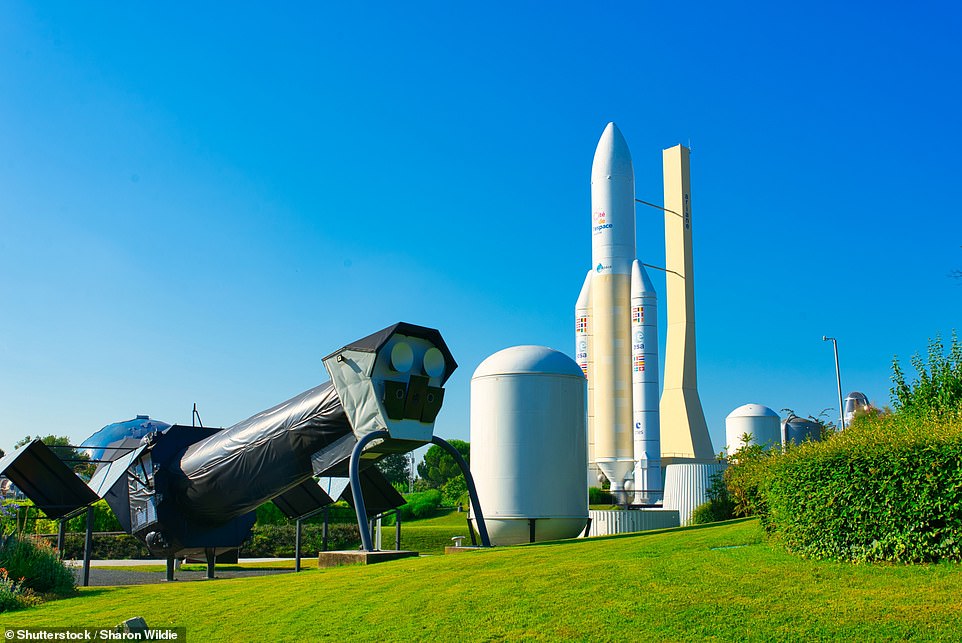 You won’t be short of impressive buildings to admire, including the UNESCO World Heritage-listed Basilica of Saint-Sernin, with its octagonal bell-tower and gold-plated canopy.

Don’t miss Cite de l’Espace on the outskirts, dedicated to space travel and the city’s role in international space programmes. The planetarium shows Martian meteorites and a Moon fragment.

Know before you go

EasyJet (easyjet.com) has Gatwick-Toulouse returns from about £85. Airport shuttle buses to the city centre are £7 and take 20 minutes. More information at toulouse-visit.com. Holiday Extras (holidayextras.co.uk) has savings on all aspects of travel. Fully vaccinated visitors can enter France but must complete a ‘sworn statement’ – see ‘entry requirements’ for France at gov.uk.

You’re not racing, so stop driving like there’s a trophy at your destination

You're not racing, so stop driving like there's a trophy at your destination

Pot Bound For The Win