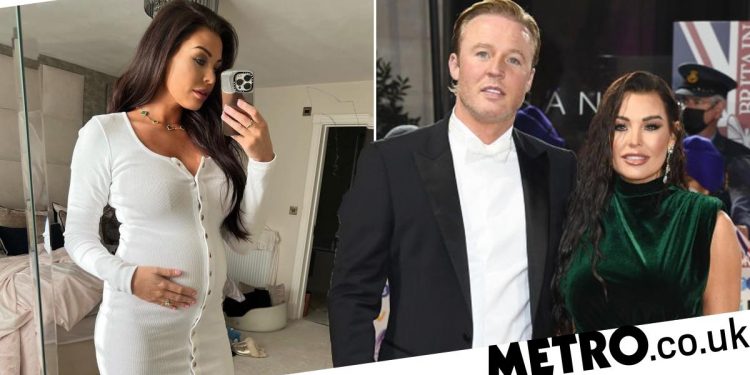 
Reality star Jess Wright has revealed she is expecting a baby boy.

The former Towie favourite, 36, announced she was pregnant in November, sharing the news with a black and white photo as she cradled her baby bump.

A delighted Jess, who is 21 weeks pregnant, has now confirmed that she is expecting a baby boy, and explained she ‘can’t wait’ to be a mum.

Speaking to Hello! magazine, Jess said she had ‘always envisioned being a girl mum because I’m so girly so I was pretty shocked to hear it was a boy,’ but said she ‘couldn’t be happier’ with the news.

Husband William said knowing the sex of their unborn baby ‘feels surreal,’ and while he would have been happy with a boy or a girl, ‘having a son as my first child… it doesn’t really get any better’.

‘I can’t wait for weekends for father-son bonding and teaching him to hopefully be a well-mannered, lovely little boy,’ the expectant father said proudly.

The newly-married couple had actually discovered they were expecting during their wedding celebrations in September, where they tied the knot surrounded by friends and family.

Jess’ brother, fellow Towie star Mark Wright, and his wife Michelle Keegan were among guests at the destination nuptials.

‘It feels like a fairytale,’ Jess shared. ‘We eventually got our wedding and believe it or not, I was unknowingly pregnant at the wedding.’

The reality star fell pregnant naturally after the couple froze their embryos last year, and added that she feels ‘so grateful and blessed’ to be expecting their first child.

In her pregnancy announcement at the end of last year, a photograph showed a nude Jess looking down at her stomach with a white sheet protecting her modesty.

She was previously in a relationship with Strictly Come Dancing professional Giovanni Pernice for a few months, before they split in April 2018.


MORE : Jess Wright reveals details from delayed Mallorca wedding: ‘I will never give up on a dream’

Places Where Omicron is Most Contagious — Eat This Not That – Eat This, Not That