Trade up, trade down or stay put in 2022 NFL Draft: The best plan for all 32 picks in the first round 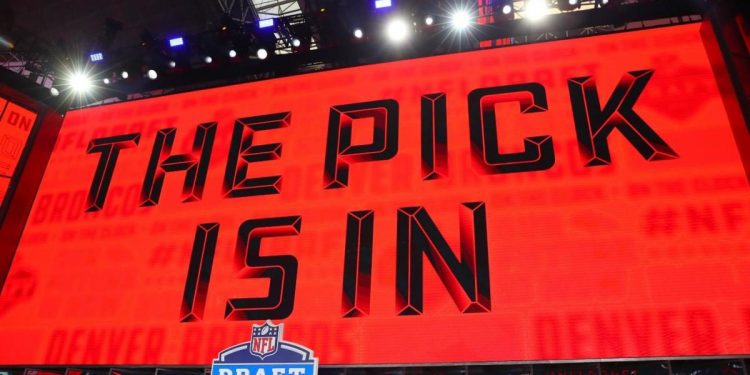 
The 2022 NFL Draft is just around the corner, and unlike in years past, no one’s got even a mild handle on how the first round is going to play out. There’s a consensus regarding the likely No. 1 overall pick, sure, and you’ll find a lot of the same names in the top five or so picks across mock drafts. But there’s a lot of uncertainty even among notable positions like quarterback, where prospects like Kenny Pickett, Malik Willis and Matt Corral are all vying to come off the board first.

With that in mind, we decided to run through each of the 32 first-round picks and suggest what each team should do in each slot: trade up, trade down or stay put. Some clubs are better positioned to move up for premium talent. Others might benefit more from collecting additional assets. Here’s how we’d advise their decision-makers:

Normally, we’d say trade down just because, even after another veteran spending spree, they could use all the picks they can get. But with 12 selections already in hand, the mission here is simple: secure the best guy. That’s likely Michigan pass rusher Aidan Hutchinson, who could pair with Josh Allen to give Jacksonville a legitimate D-line.

If they really like a quarterback here (see: Malik Willis), they should think long and hard about pulling the trigger. If not, they’d be better off expanding their collection of picks, especially with another first (No. 32) on deck.

Entertaining calls to move down wouldn’t hurt, but they’ve already got two thirds and two fourths. With a need for premium talent at pretty much every position, they should sit tight, add a top tackle or pass rusher, then find another starter at No. 13.

Maybe a tackle (Ikem Ekwonu) or edge rusher (Kayvon Thibodeaux) is worth it, but with another crack at a first-rounder at No. 10, they can afford to move down and pick up another Day 2 pick or two as they try to accelerate their rebuild.

Like the Jets, they’ll surely have a chance to get a top OT or pass rusher, but with another pick two slots later, why not solicit offers from QB-needy teams? Coming off a dire salary-cap situation, they need all the extra ammunition they can get.

This is a popular spot for QB projections, and hey, if they’re sold on Willis or Kenny Pickett, you could do worse. But considering most of these QB prospects appear similar in terms of risk/reward, they should prioritize rebuilding draft capital — they don’t pick again until the fourth round — and take a swing at QB later in the first.

We have them trading back from No. 5, so here is the prime spot for securing an instant starter, either at tackle or basically any defensive position. Sauce Gardner, Kyle Hamilton or Nakobe Dean would all make for playmaking additions.

Many have suggested a trade down, but they already own two second- and third-round picks after the Matt Ryan and Julio Jones trades of the last year. By sitting tight, they ensure themselves a shot at a top QB — Willis being the most enticing long-term bet — or playmaker, either on offense (Garrett Wilson?) or defense (Jermaine Johnson II?).

Armed with a pair of high second-rounders after their Russell Wilson trade, they have the ability to shake up the top 10, either to add Wilson’s successor (Willis? Matt Corral?) or get themselves a new left tackle or No. 1 cornerback.

If they’re gonna move down from No. 4, as suggested above, they should hang onto this one, ensuring they leave Day 1 with a top-10 talent, likely at wide receiver, edge rusher or cornerback.

Staying put and adding the best defensive back on the board would be just fine, but after dealing a pair of picks for new QB Carson Wentz, they should consider a drop to accumulate darts.

There’s a real case to be made for every scenario here. If you think they’re playoff material, why not move up to secure one of the top corners? If you’re taking the long view, why not add picks so new management can prepare for life beyond Kirk Cousins? In the end, they can probably stay where they’re at, keep their other picks and still land a top-flight edge rusher or cover man.

More than most teams with multiple firsts, they desperately need talent at every position. By picking at No. 3 and No. 13, they should at least be able to add one impact starter to their lineup for 2022.

They could just as easily sit tight and roll with the best pass rusher or corner, but with two third-rounders and a whopping five fourth-rounders, they shouldn’t hesitate to make a play for a top-10 talent like Sauce Gardner or Jermaine Johnson II.

It all depends on who’s available, but after moving one of their three firsts to 2023 in a big swap with the Saints, they should take a breath and secure either a Day 1 starter or long-term fixture on defense or out wide. Andrew Booth Jr. and Jordan Davis are two names to watch.

After swapping multiple picks with the Eagles to add a first, they might as well double down and guarantee they get whomever they want, whether at QB (Kenny Pickett? Matt Corral?) or elsewhere, such as out wide or up front.

After their blockbuster performance in free agency, they can’t just sit on their hands, can they? A starting offensive or defensive tackle may fall in their laps, but they have every reason to be aggressive, building around Justin Herbert to win now.

They’re pushing their chips to 2023, when QB may resurface on their radar. If they sit tight and pick at No. 15, they should look to deal again, this time to collect an additional Day 2 pick while sliding slightly down in the first.

Maybe they’d use this as part of a huge move up from No. 16 (see above), but the better plan is probably addressing multiple needs at once, ideally leaving the first round with new long-term options at tackle and wide receiver.

A trade up might be the only way to secure one of the top QB prospects, but are we so sure? By being patient, Pittsburgh will likely at least have a crack at the last “first-round” QB, whether it’s Corral or Willis or Desmond Ridder, without mortgaging extra 2022 picks they don’t have.

Do they intend to compete with the Bills this year? Or remain ahead of the Dolphins? If so, they’d be just as wise to consider moving down — and giving themselves a few shots at filling holes at corner and linebacker — as making an upward splash.

With an extra first from the Davante Adams deal, they should be as active as possible trying to swing a move up, mostly to replace Adams out wide. Whether it’s for Drake London or Treylon Burks or Chris Olave, they need instant help for Aaron Rodgers.

For two straight years, they’ve approached free agency like it’s 2017, prioritizing older/injured veterans. They’re also without fourth- and fifth-rounders. In a deep WR and edge-rusher class, they can afford to slide down and add another pick or two.

They could use immediate O-line help, and they should be able to find some here. Zion Johnson and Kenyon Green both make some sense as plug-and-play guards. A WR or pass rusher could also be on the table.

In such a deep WR class, they can sit tight and wait for a high-upside prospect like Jameson Williams or Jahan Dotson to fall into their laps. Josh Allen should be satisfied regardless.

This is a spot to watch for a surprise QB pick, but it’s also ideal for staying patient and seeing which top OTs or WRs slide. Don’t rule out a move up if they’re really interested in finding a Ryan Tannehill successor.

Their roster is already properly assembled for a legitimate playoff run. No need to force any minor issues and surrender valuable future picks to move into the top 25. Hold tight and bolster the depth off the edge or up front.

This is assuming they don’t package this one with No. 22 to move up. If the Packers can leave Day 1 with a new starting receiver, as well as a new offensive tackle or pass rusher, Brian Gutekunst should be saluted.

With two firsts at their disposal after the Tyreek Hill deal, Kansas City is primed to move. The Chiefs are in win-now mode as long as Patrick Mahomes is under center, so leaping other teams to add a top WR makes lots of sense.

Somebody’s gonna be itching to slip back into the first round here, but the Chiefs have plenty of extra picks after dealing Tyreek Hill. If they can address WR with No. 29 (or via trade up), they can add a pass rusher or cornerback help here.

Obviously they’re still in win-now mode coming off the Super Bowl bid, but in a draft where the latter first-round picks aren’t entirely predictable, they shouldn’t mind adding an extra pick or two to drop down a few spots and give someone else the fifth-year option.

A trade down is just as smart, but let’s say they really are intrigued by a QB who’s still on the board (Desmond Ridder?). Securing a fifth-year option for a signal-caller would be smart.