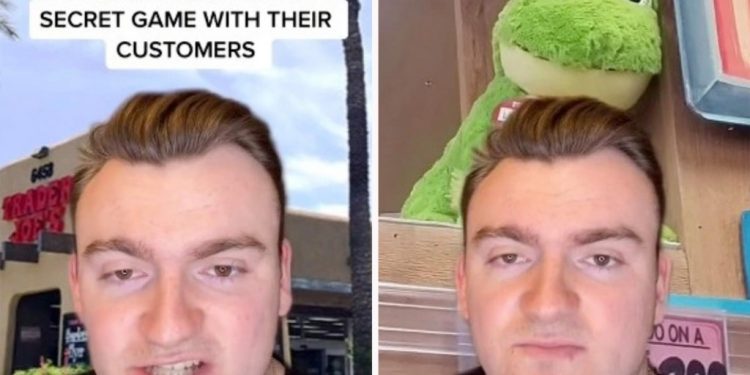 
You might think the stuffed animals placed around your local Trader Joe’s are just a cute, friendly addition to the store’s decor.

However, it turns out that the adorable animals are actually part of a sweet game employees play with customers.

The tip was spilled by @timbosliceoflife12 in an informational video he shared online.

“If you’ve ever been to a Trader Joe’s before, you know their employees are extremely friendly and they’ve got a lot of healthy products that you just can’t find in other stores,” he said.

“And hidden within these healthy products you may find a random stuffed animal.”

Tim went on to explain that the reason those stuffed animals are “hidden” is so customers can find them and return them to Trader Joe’s employees.

“The employee will then give you a lollipop,” he revealed.

He added that anyone who walks into a Trader Joe’s can play, but it’s “obviously” geared toward kids.

He also said that not every store participates in the game, but if you do find a stuffed animal, you can certainly play.

There are also several people who have shared their participation in the game online since as early as 2009.

The Sun reached out to Trader Joe’s for comment, but did not hear back before this article was published.

Trader Joe’s was established in Pasadena, California in 1967 and has since grown into a beloved grocery chain offering unique items from around the world at generally affordable prices.

Even better, Trader Joe’s has a “try before you buy” policy, which allows customers to taste any of their products before purchasing them.

But before you even walk into the store, a Trader Joe’s fanatic has revealed the products she thinks are worth it.